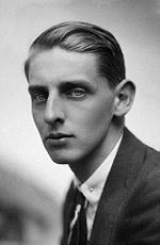 Encyclopedia
{| style="float:right;"
|
Prince Nicholas of Romania ' onMouseout='HidePop("33496")' href="/topics/Peles_Castle">Peleş Castle
Peles Castle
Peleș Castle is a Neo-Renaissance castle in the Carpathian Mountains, near Sinaia, in Prahova County, Romania, on an existing medieval route linking Transylvania and Wallachia, built between 1873 and 1914...
– 9 June 1978, Madrid
Madrid
Madrid is the capital and largest city of Spain. The population of the city is roughly 3.3 million and the entire population of the Madrid metropolitan area is calculated to be 6.271 million. It is the third largest city in the European Union, after London and Berlin, and its metropolitan...
) was the second son of King
King of Romania
King of the Romanians , rather than King of Romania , was the official title of the ruler of the Kingdom of Romania from 1881 until 1947, when Romania was proclaimed a republic....
Ferdinand I
Ferdinand I of Romania
Ferdinand was the King of Romania from 10 October 1914 until his death.-Early life:Born in Sigmaringen in southwestern Germany, the Roman Catholic Prince Ferdinand Viktor Albert Meinrad of Hohenzollern-Sigmaringen, later simply of Hohenzollern, was a son of Leopold, Prince of...
and Queen Marie of Romania
Romania
Romania is a country located at the crossroads of Central and Southeastern Europe, on the Lower Danube, within and outside the Carpathian arch, bordering on the Black Sea...
.

Born in Peleş Castle
Peles Castle
Peleș Castle is a Neo-Renaissance castle in the Carpathian Mountains, near Sinaia, in Prahova County, Romania, on an existing medieval route linking Transylvania and Wallachia, built between 1873 and 1914...
, Sinaia
Sinaia
Sinaia is a town and a mountain resort in Prahova County, Romania. The town was named after Sinaia Monastery, around which it was built; the monastery in turn is named after the Biblical Mount Sinai...
, Nicholas was the younger brother of Carol
Carol II of Romania
Carol II reigned as King of Romania from 8 June 1930 until 6 September 1940. Eldest son of Ferdinand, King of Romania, and his wife, Queen Marie, a daughter of Prince Alfred, Duke of Edinburgh, the second eldest son of Queen Victoria...
, heir apparent
Heir apparent
An heir apparent or heiress apparent is a person who is first in line of succession and cannot be displaced from inheriting, except by a change in the rules of succession....
, who renounced his rights of succession on 12 December 1925. When Ferdinand died in 1927, he was succeeded as king by Carol's five year-old son, Michael; Nicholas himself had been proposed as heir-apparent when Carol married the commoner Zizi Lambrino
Zizi Lambrino
Joanna Marie Valentina "Zizi" Lambrino was the first wife of King Carol II of Romania...
in 1918 (a marriage later annulled). Given Michael's youth, a regency
Regent
A regent, from the Latin regens "one who reigns", is a person selected to act as head of state because the ruler is a minor, not present, or debilitated. Currently there are only two ruling Regencies in the world, sovereign Liechtenstein and the Malaysian constitutive state of Terengganu...
council had to be formed (20 July), and Prince Nicholas was forced to abandon his career in the British
United Kingdom
The United Kingdom of Great Britain and Northern IrelandIn the United Kingdom and Dependencies, other languages have been officially recognised as legitimate autochthonous languages under the European Charter for Regional or Minority Languages...
Royal Navy
Royal Navy
The Royal Navy is the naval warfare service branch of the British Armed Forces. Founded in the 16th century, it is the oldest service branch and is known as the Senior Service...
in order to return home to serve on the council, alongside Gheorghe Buzdugan and Patriarch
Patriarch of All Romania
The Patriarch of All Romania is the title of the head of the Romanian Orthodox Church. As of September 12, 2007, the chair is occupied by Daniel Ciobotea.-Metropolitans of Ungro-Wallachia:* Maxim * Macarie II * Ilarion II...
Miron Cristea
Miron Cristea
Miron Cristea, was an Austro-Hungarian-born Romanian cleric and politician....
.

Although unofficially referred to as "the first-ranking regent", Nicholas resented having to abandon his naval career and had no interest in politics. He tried to continue his father's cooperation with the National Liberals
National Liberal Party (Romania)
The National Liberal Party , abbreviated to PNL, is a centre-right liberal party in Romania. It is the third-largest party in the Romanian Parliament, with 53 seats in the Chamber of Deputies and 22 in the Senate: behind the centre-right Democratic Liberal Party and the centre-left Social...
(PNL), and to contain the opposition of the National Peasants' Party
National Peasants' Party
The National Peasants' Party was a Romanian political party, formed in 1926 through the fusion of the Romanian National Party from Transylvania and the Peasants' Party . It was in power between 1928 and 1933, with brief interruptions...
(PNŢ) to the regency by appointing a national government
National unity government
A national unity government, government of national unity, or national union government is a broad coalition government consisting of all parties in the legislature, usually formed during a time of war or other national emergency.- Canada :During World War I the Conservative government of Sir...
under Ion I. C. Brătianu
Ion I. C. Bratianu
Ion I. C. Brătianu was a Romanian politician, leader of the National Liberal Party , the Prime Minister of Romania for five terms, and Foreign Minister on several occasions; he was the eldest son of statesman and PNL leader Ion Brătianu, the brother of Vintilă and Dinu Brătianu, and the father of...
. Refused by Brătianu, he witnessed a change in Carol's stance in mid 1927, when the latter argued that he had been forced to give up his throne. The cooperation between Carol and the PNŢ was successfully neutralized by the PNL, but Brătianu's death in 1927 restored contacts and increased the appeal of the PNŢ. By then, the regency was widely perceived as consisting of figureheads, and, after Constantin Sărăţeanu (an appointee of PNŢ leader Iuliu Maniu
Iuliu Maniu
Iuliu Maniu was an Austro-Hungarian-born Romanian politician. A leader of the National Party of Transylvania and Banat before and after World War I, he served as Prime Minister of Romania for three terms during 1928–1933, and, with Ion Mihalache, co-founded the National Peasants'...
) succeeded the deceased Buzdugan in 1929, it was believed to be torn apart by contrasting political ambitions. According to Nicolae Iorga
Nicolae Iorga
Nicolae Iorga was a Romanian historian, politician, literary critic, memoirist, poet and playwright. Co-founder of the Democratic Nationalist Party , he served as a member of Parliament, President of the Deputies' Assembly and Senate, cabinet minister and briefly as Prime Minister...
, Miron Cristea himself had said:


"The Regency does not work because it has no head. The Prince smokes his cigarettes, Sărăţeanu looks through his books, and I, as a priest, can only try to reconcile."

Nicholas was at first delighted when Carol returned home to Romania
Romania
Romania is a country located at the crossroads of Central and Southeastern Europe, on the Lower Danube, within and outside the Carpathian arch, bordering on the Black Sea...
in 8 June 1930 (becoming King Carol II and thus putting an end to the regency arrangement). He welcomed the Parliament
Parliament of Romania
The Parliament of Romania is made up of two chambers:*The Chamber of Deputies*The SenatePrior to the modifications of the Constitution in 2003, the two houses had identical attributes. A text of a law had to be approved by both houses...
session that voted to repeal the 1926 legislation, and accompanied his newly-arrived brother from Băneasa Airfield
Aurel Vlaicu International Airport
-Terminated destinations:-See also:*Aviation in Romania*Transport in Romania*Blue Air-External links:**...
to Cotroceni Palace
Cotroceni Palace
Cotroceni Palace is a palace in Bucharest which is the residence of the President of Romania, located at Bulevardul Geniului, nr. 1.On Cotroceni Hill, in 1679, Şerban Cantacuzino built a monastery...
.

However, the cordial relations between Nicholas and Carol were short-lived. Nicholas wanted to marry Ioana (Joanna) Dumitrescu-Doletti, a divorced woman, but was aware that it might be embarrassing for the king to have to authorize such a marriage. Carol himself suggested that the couple should marry without first seeking his consent (even though members of the royal family were required to obtain the king's consent before marrying). Carol had intimated that in these circumstances he would accept the marriage as a fait accompli
Fait Accompli
Fait accompli is a French phrase which means literally "an accomplished deed". It is commonly used to describe an action which is completed before those affected by it are in a position to query or reverse it...
, but after the wedding Carol promptly used it as an excuse to deprive Nicholas of his royal privilege
Privilege
A privilege is a special entitlement to immunity granted by the state or another authority to a restricted group, either by birth or on a conditional basis. It can be revoked in certain circumstances. In modern democratic states, a privilege is conditional and granted only after birth...
s and titles and to exile him from Romania. He left for Spain
Spain
Spain , officially the Kingdom of Spain languages]] under the European Charter for Regional or Minority Languages. In each of these, Spain's official name is as follows:;;;;;;), is a country and member state of the European Union located in southwestern Europe on the Iberian Peninsula...
, and ultimately settled in Switzerland
Switzerland
Switzerland name of one of the Swiss cantons. ; ; ; or ), in its full name the Swiss Confederation , is a federal republic consisting of 26 cantons, with Bern as the seat of the federal authorities. The country is situated in Western Europe,Or Central Europe depending on the definition....
.

He held the titles of Air Marshal of the Romanian Air Force
Romanian Air Force
The Romanian Air Force is the air force branch of the Romanian Armed Forces. It has an air force headquarters, an operational command, four air bases and an air defense brigade...
, honorary Lieutenant of the British Royal Navy, Knight of the Order of Ferdinand I of Romania, Bailiff Grand Cross
Grand Cross
The phrase Grand Cross is used to denote the highest grade in many orders of knighthood. Sometimes the holders of the highest grade are referred to "knights grand cross" or just "grand crosses"; in other cases the actual insignia itself is called "the grand cross".Alternatively, in some other...
of the Sovereign Order of Malta, Grand Cross of the Légion d’Honneur, Grand Cordon of the Order of Leopold (Belgium); Order of the White Lion
Order of the White Lion
The Order of the White Lion is the highest order of the Czech Republic. It continues a Czechoslovak order of the same name created in 1922 as an award for foreigners....
of Czechoslovakia
Czechoslovakia
Czechoslovakia or Czecho-Slovakia was a sovereign state in Central Europe which existed from October 1918, when it declared its independence from the Austro-Hungarian Empire, until 1992...
, of Order of the Star of Karađorđe of Yugoslavia
Kingdom of Yugoslavia
The Kingdom of Yugoslavia was a state stretching from the Western Balkans to Central Europe which existed during the often-tumultuous interwar era of 1918–1941...
, of Holy Saviour of Greece
Greece
Greece , officially the Hellenic Republic , and historically Hellas or the Republic of Greece in English, is a country in southeastern Europe....
; held the chain or Order of Carol I of Romania, and the Order of the White Eagle of Poland, and many other orders and decorations. He was chief of the Three Regents, July 1927 to June 1930. In 1927 he founded and he was the first President of the Romanian Kennel Club.