Encyclopedia
Sinaia is a town and a mountain resort in Prahova County
Prahova County
Prahova is a county of Romania, in the historical region Muntenia, with the capital city at Ploieşti.-Demographics:In 2002, it had a population of 829,945 and the population density was 176/km². It is Romania's most populated county, having a population density double than the country's mean...
, Romania
Romania
Romania is a country located at the crossroads of Central and Southeastern Europe, on the Lower Danube, within and outside the Carpathian arch, bordering on the Black Sea...
. The town was named after Sinaia Monastery
Sinaia Monastery
The Sinaia Monastery, located in Sinaia, in Prahova County, Romania, was founded by Prince Mihail Cantacuzino in 1695 and named after the great Sinai Monastery on Mount Sinai. As of 2005, it is inhabited by 13 Christian Orthodox monks led by hegumen Macarie Bogus...
, around which it was built; the monastery in turn is named after the Biblical Mount Sinai
Biblical Mount Sinai
The Biblical Mount Sinai is the mountain at which the Book of Exodus states that the Ten Commandments were given to Moses by God...
. King Carol I of Romania
Carol I of Romania
Carol I , born Prince Karl of Hohenzollern-Sigmaringen was reigning prince and then King of Romania from 1866 to 1914. He was elected prince of Romania on 20 April 1866 following the overthrow of Alexandru Ioan Cuza by a palace coup...
built his summer home, Peleş Castle
Peles Castle
Peleș Castle is a Neo-Renaissance castle in the Carpathian Mountains, near Sinaia, in Prahova County, Romania, on an existing medieval route linking Transylvania and Wallachia, built between 1873 and 1914...
, near the town.

Sinaia is about 60 km northwest of Ploieşti
Ploiesti
Ploiești is the county seat of Prahova County and lies in the historical region of Wallachia in Romania. The city is located north of Bucharest....
and 50 km south of Braşov
Brasov
Brașov is a city in Romania and the capital of Brașov County.According to the last Romanian census, from 2002, there were 284,596 people living within the city of Brașov, making it the 8th most populated city in Romania....
, in a mountainous area on the Prahova River
Prahova River
The Prahova River is a river of Southern Romania, which rises from the Bucegi Mountains, in the Southern Carpathians and flows into the Ialomiţa...
valley, just east of the Bucegi Mountains
Bucegi Mountains
The Bucegi Mountains are located in central Romania, south of the city Braşov. They are part of the Southern Carpathians group of the Carpathian Mountains....
. The altitude varies between 767 m and 860 m.

The city is a popular destination for hiking and winter sports, especially downhill skiing. Among the tourist landmarks, the most important are Peleş Castle, Pelişor
Pelisor
Pelişor Castle is a castle in Sinaia, Romania, part of the same complex as the larger castle of Peleş. It was built in 1899–1903 by order of King Carol I, as the residence for his nephew and heir, the future King Ferdinand and Ferdinand's consort Queen Marie.In 2006, it was decided that the palace...
Castle, Sinaia Monastery, Sinaia Casino
Sinaia Casino
The Sinaia Casino is located in "Dimitrie Ghica" park, Sinaia, Romania and was built at the initiative of King Carol I of Romania.Construction began in 1912 and was finished a year later. The work was supervised by architect Petre Antonescu, who was also the author of the plans. The main...
, Sinaia train station
Sinaia train station
The Sinaia train station serves the Sinaia mountain resort in Romania. The first station was built in 1913 by the Demeter Cartner Company, and it was reserved exclusively for the Royal Family and its guests at Peleş Castle, generally foreign leaders. On the station platform, there is a memorial...
, and the Franz Joseph and Saint Anne Cliffs
Franz Joseph and Saint Anne Cliffs
The Franz Joseph and Saint Anne Cliffs are located near Sinaia, Prahova Valley, Romania.Franz Joseph Cliffs are located near the Sheepfold Meadow . They have been fitted out during Royal Family's time, with stairs and railings, and, reaching up on top of them. one can see a large part of the upper...
. Sinaia was also the summer residence of the Romanian composer George Enescu
George Enescu
George Enescu was a Romanian composer, violinist, pianist, conductor and teacher.-Biography:Enescu was born in the village of Liveni , Dorohoi County at the time, today Botoşani County. He showed musical talent from early in his childhood. A child prodigy, Enescu created his first musical...
, who stayed at the Luminiş
Luminis
The Luminiş Villa, George Enescu Memorial House is located in the Cumpătu district, the only suburb of Sinaia, Romania. Located on the right bank of Prahova River. It was owned by the Romanian composer and musician George Enescu...
villa. 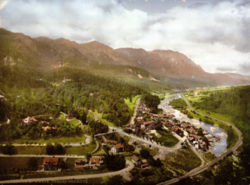 Summers are bracing and very rainy in the beginning of the season. Winters are relatively mild, with heavy snow. Average annual rainfall is 900 mm. The maximum monthly registered rainfall was in June (173 mm). The minimum rainfall was recorded in September (55 mm) and February (40 mm).

A uniform layer of snow is deposited usually in November and it melts from March to April, sometimes at the beginning of May. The thickness of the snow layer varies between 20 centimeters and 3 meters in higher elevations.

In recent years, Sinaia has felt the effects of global climate change – change that has meant shorter summers, with temperatures frequently over 30°C, a slight reduction in the length of spring and autumn, and relatively longer winters (end of October – beginning of May), colder winters with entire weeks dominated by frost ( -19°C to -25°C) and numerous blizzards.

Proponents claim that Sinaia has a refreshing and stimulating climate that is beneficial to the human body. There are also some mineral springs in Câinelui Valley that have sulphur-ferric mineral water and contain other soluble minerals. 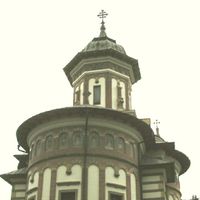 In the town of Sinaia and its surroundings restrictions are in place regarding cutting down or picking up flora. The felling of trees is not allowed. It is forbidden to pick up any alpine plants. Severe punishment may be in store for those who gather these plants: the Mountain Peony
Peony
Peony or paeony is a name for plants in the genus Paeonia, the only genus in the flowering plant family Paeoniaceae. They are native to Asia, southern Europe and western North America...
(Rhododendron Kotsky), Edelweiss
Leontopodium
Leontopodium is a genus of plants in the daisy family, which includes edelweiss , a well-known plant from the mountains of Europe. The term edelweiss can, more rarely, refer to other members of the genus...
(Leontopodium alpinum), and the Yellow Gentiana (Gentiana lutea). Tourist camping is only authorized in designated places, following necessary and compulsory protection standards.

The mountainous area in which Sinaia is located is in the Bucegi Natural Park region. The Park covers a total area of 326.63 square kilometres, of which 58.05 square kilometres are under strict protection and shelter natural monuments. The Bucegi Natural Preserve area includes all the abrupt areas of the mountains Vârful cu Dor, Furnica, and Piatra Arsă. The mountainous area is continuously patrolled by mountain rescue patrols as well as by members of the Mountain Police.

At the entrance to the Cumpătu district, one can find the “Sinaia alder-tree grove” botanical reservation placed under the protection of the Romanian Academy
Romanian Academy
The Romanian Academy is a cultural forum founded in Bucharest, Romania, in 1866. It covers the scientific, artistic and literary domains. The academy has 181 acting members who are elected for life....
and the Bucharest Biology Institute. In the same district, there is also another ecological research station under the patronage of UNESCO
UNESCO
The United Nations Educational, Scientific and Cultural Organization is a specialized agency of the United Nations...
– Jacques-Yves Cousteau
Jacques-Yves Cousteau
Jacques-Yves Cousteau was a French naval officer, explorer, ecologist, filmmaker, innovator, scientist, photographer, author and researcher who studied the sea and all forms of life in water...
, belonging to the University of Bucharest
University of Bucharest
The University of Bucharest , in Romania, is a university founded in 1864 by decree of Prince Alexander John Cuza to convert the former Saint Sava Academy into the current University of Bucharest.-Presentation:...
, which also includes a museum of Bucegi Mountains fauna in a laboratory for nature protection.