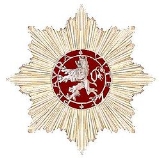 The order was created as an award for merit by Czechoslovakia for foreign citizens. The Order was established in five classes and two divisions, civil (with two crossed palms above the badge) and military (with two crossed swords above the badge). Medals were made of gold and silver. The numbers of recipients was originally limited, with the limits changing during later years. The Statutes of the order were amended in 1924, 1930, and 1936.

The badge of the Order was a five-sided red enameled star, the ends adorned with small balls, and with leaflets between the arms. In middle of the star is a silver lion, taken from the national coat of arms. The reverse or the Star is also red enameled, with the coat of arms of the former parts of Czechoslovakia (Bohemia
Bohemia
Bohemia is a historical region in central Europe, occupying the western two-thirds of the traditional Czech Lands. It is located in the contemporary Czech Republic with its capital in Prague...
, Moravia
Moravia
Moravia is a historical region in Central Europe in the east of the Czech Republic, and one of the former Czech lands, together with Bohemia and Silesia. It takes its name from the Morava River which rises in the northwest of the region...
, Silesia
Silesia
Silesia is a historical region of Central Europe located mostly in Poland, with smaller parts also in the Czech Republic, and Germany.Silesia is rich in mineral and natural resources, and includes several important industrial areas. Silesia's largest city and historical capital is Wrocław...
, Slovakia
Slovakia
The Slovak Republic is a landlocked state in Central Europe. It has a population of over five million and an area of about . Slovakia is bordered by the Czech Republic and Austria to the west, Poland to the north, Ukraine to the east and Hungary to the south...
and Carpathian Ruthenia
Carpathian Ruthenia
Carpathian Ruthenia is a region in Eastern Europe, mostly located in western Ukraine's Zakarpattia Oblast , with smaller parts in easternmost Slovakia , Poland's Lemkovyna and Romanian Maramureş.It is...
). 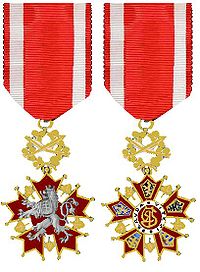 The Order was remodeled after the change of the official name of Czechoslovakia
Czechoslovakia
Czechoslovakia or Czecho-Slovakia was a sovereign state in Central Europe which existed from October 1918, when it declared its independence from the Austro-Hungarian Empire, until 1992...
and its national arms. A new regulative was issued for the order, and was divided into three classes (I, II, and III, with I being the highest). The Collar was reserved only for foreign heads of state.