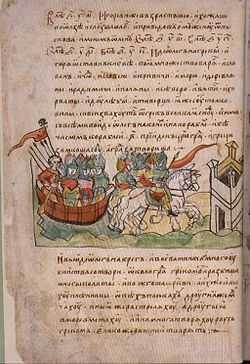 The Primary Chronicle Ruthenian Primary Chronicle or Russian Primary Chronicle, is a history of Kievan Rus'
Kievan Rus'
Kievan Rus was a medieval polity in Eastern Europe, from the late 9th to the mid 13th century, when it disintegrated under the pressure of the Mongol invasion of 1237–1240....
from about 850 to 1110, originally compiled in Kiev
Kiev
Kiev or Kyiv is the capital and the largest city of Ukraine, located in the north central part of the country on the Dnieper River. The population as of the 2001 census was 2,611,300. However, higher numbers have been cited in the press....
about 1113.

The original compilation was long considered to be the work of a monk named Nestor
Nestor the Chronicler
Saint Nestor the Chronicler was the reputed author of the Primary Chronicle, , Life of the Venerable Theodosius of the Kiev Caves, Life of the Holy Passion Bearers, Boris and Gleb, and of the so-called Reading.Nestor was a monk of the Monastery of the Caves in Kiev from 1073...
and hence was formerly referred to as Nestor's Chronicle or Nestor's manuscript. His many sources included earlier (now-lost) Slavonic chronicles, the Byzantine annals of John Malalas
John Malalas
John Malalas or Ioannes Malalas was a Greek chronicler from Antioch. Malalas is probably a Syriac word for "rhetor", "orator"; it is first applied to him by John of Damascus .-Life:Malalas was educated in Antioch, and probably was a jurist there, but moved to...
and George Hamartolus
George Hamartolus
George Hamartolos or Hamartolus was a monk at Constantinople under Michael III and the author of a chronicle of some importance. Hamartolus is not his name but the epithet he gives to himself in the title of his work: "A compendious chronicle from various chroniclers and interpreters, gathered...
, native legends
Bylina
Bylina or Bylyna is a traditional Russian oral epic narrative poem. Byliny singers loosely utilize historical fact greatly embellished with fantasy or hyperbole to create their songs...
and Norse saga
Norse saga
The sagas are stories about ancient Scandinavian and Germanic history, about early Viking voyages, the battles that took place during the voyages, about migration to Iceland and of feuds between Icelandic families...
s, several Greek religious texts, Rus'-Byzantine treaties, and oral accounts of Yan Vyshatich
Yan Vyshatich
Yan Vyshatich was a Kievan nobleman and military commander . The last known representative of the Dobrynya dynasty, Yan Vyshatich was the son of Vyshata and grandson of Ostromir....
and other military leaders. Nestor worked at the court of Sviatopolk II of Kiev
Sviatopolk II of Kiev
Sviatopolk II Iziaslavich was supreme ruler of the Kievan Rus for 20 years, from 1093 to 1113. He was not a popular prince, and his reign was marked by incessant rivalry with his cousin Vladimir Monomakh...
and probably shared his pro-Scandinavian policies.

In the year 1116, Nestor's text was extensively edited by hegumen
Hegumen
Hegumen, hegumenos, igumen, or ihumen is the title for the head of a monastery of the Eastern Orthodox Church or Eastern Catholic Churches, similar to the one of abbot. The head of a convent of nuns is called hegumenia or ihumenia . The term means "the one who is in charge", "the leader" in...
Sylvester who appended his name at the end of the chronicle. As Vladimir Monomakh was the patron of the village of Vydubychi
Vydubychi
Vydubychi is a historical neighborhood in Ukrainian capital Kiev. Geographically constituting a hill and a valley on the Right Bank of the Dnieper River, it is now a part of the Pechersk district of the city....
where his monastery is situated, the new edition glorified that prince and made him the central figure of later narrative. This second version of Nestor's work is preserved in the Laurentian codex (see below).

A third edition followed two years later and centered on the person of Vladimir's son and heir, Mstislav the Great. The author of this revision could have been Greek, for he corrected and updated much data on Byzantine affairs. This latest revision of Nestor's work is preserved in the Hypatian codex (see below).

The Laurentian codex
Laurentian Codex
Laurentian Codex or Laurentian Chronicle is a collection of chronicles that includes the oldest extant version of the Primary Chronicle and its continuations, mostly relating the events in Northern Russia ....
was compiled in what are today Russian lands by the Nizhegorod
Nizhny Novgorod
Nizhny Novgorod , colloquially shortened to Nizhny, is, with the population of 1,250,615, the fifth largest city in Russia, ranking after Moscow, St. Petersburg, Novosibirsk, and Yekaterinburg...
monk Laurentius for the Prince Dmitry Konstantinovich in 1377. The original text he used was a lost codex compiled for the Grand Duke Mikhail of Tver in 1305. The account continues until 1305, but the years 898–922, 1263–83 and 1288–94 are missing for reasons unknown. The manuscript was acquired by the famous Count Musin-Pushkin
Aleksei Musin-Pushkin
Aleksei Ivanovich Musin-Pushkin , count since 1797, statesman, historian and art collector. Musin-Pushkin is credited with discovering in Yaroslavl the manuscript The Tale of Igor's Campaign...
in 1792 and subsequently presented to the National Library of Russia in Saint Petersburg
Saint Petersburg
Saint Petersburg is a city and a federal subject of Russia located on the Neva River at the head of the Gulf of Finland on the Baltic Sea...
.

The Hypatian manuscript dates to the 15th century. It was written in what are today Ukrainian lands and incorporates much information from the lost 12th-century Kievan and 13th-century Halych
Halych
Halych is a historic city on the Dniester River in western Ukraine. The town gave its name to the historic province and kingdom of Kingdom of Galicia–Volhynia, of which it was the capital until the early 14th century, when the seat of the local princes was moved to Lviv...
ian chronicles. The language of this work is the East Slavic version of Church Slavonic language with many additional irregular east-slavisms (like other east-slavic codices of the time).Whereas the Laurention (Muscovite) text traces the Kyivan legacy through to the Muscovite princes, the Hypation text traces the Kyivan legacy through the rulers of the Halych principality.The Hypatian codex was re-discovered in Kyiv in the 1620s and copy was made for Prince Kostiantyn Ostrozhsky. A copy was found in Russia in the 18th century at the Ipatiev Monastery
Ipatiev Monastery
The Ipatiev Monastery —sometimes translated into English as Hypatian Monastery—is a male monastery, situated on the bank of the Kostroma River just opposite the city of Kostroma...
of Kostroma
Kostroma
Kostroma is a historic city and the administrative center of Kostroma Oblast, Russia. A part of the Golden Ring of Russian towns, it is located at the confluence of the Volga and Kostroma Rivers...
by the Russian historian Nikolai Karamzin.

Numerous monographs and published versions of the chronicle have been made, the earliest known being in 1767. Aleksey Shakhmatov
Aleksey Shakhmatov
Aleksey Aleksandrovich Shakhmatov was an outstanding Russian philologist credited with laying foundations for the science of textology.-Biography:...
published a pioneering textological analysis of the narrative in 1908. Dmitry Likhachev
Dmitry Likhachev
Dmitry Sergeyevich Likhachov was an outstanding Soviet Russian scholar who was considered the world's foremost expert in Old Russian language and literature. He has been revered as "the last of old St Petersburgers", "a guardian of national culture", and "Russia's conscience".-Biography:Likhachov...
and other Soviet scholars partly revisited his findings. Their versions attempted to reconstruct the pre-Nestorian chronicle, compiled at the court of Yaroslav the Wise in the mid-11th century.