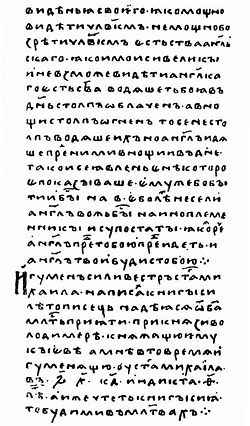 The codex was copied by the Nizhegorod
Nizhny Novgorod
Nizhny Novgorod , colloquially shortened to Nizhny, is, with the population of 1,250,615, the fifth largest city in Russia, ranking after Moscow, St. Petersburg, Novosibirsk, and Yekaterinburg...
monk Laurentius for the Prince Dmitry Konstantinovich in 1377. The original text he used was a lost codex compiled for the Grand Duke Mikhail of Tver in 1305. The account continues until 1305, but the years 898–922, 1263–83 and 1288–94 are for some reason omitted. The manuscript was acquired by the famous Count Musin-Pushkin
Aleksei Musin-Pushkin
Aleksei Ivanovich Musin-Pushkin , count since 1797, statesman, historian and art collector. Musin-Pushkin is credited with discovering in Yaroslavl the manuscript The Tale of Igor's Campaign...
in 1792 and subsequently presented to the Russian National Library
Russian National Library
The National Library of Russia in St Petersburg, known as the State Public Saltykov-Shchedrin Library from 1932 to 1992 , is the oldest public library in Russia...
in St Petersburg.