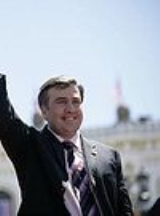 Encyclopedia
The President of Georgia is the head of state
Head of State
A head of state is the individual that serves as the chief public representative of a monarchy, republic, federation, commonwealth or other kind of state. His or her role generally includes legitimizing the state and exercising the political powers, functions, and duties granted to the head of...
, supreme commander-in-chief
Commander-in-Chief
A commander-in-chief is the commander of a nation's military forces or significant element of those forces. In the latter case, the force element may be defined as those forces within a particular region or those forces which are associated by function. As a practical term it refers to the military...
and holder of the highest office within the Government of Georgia
Georgia (country)
Georgia is a sovereign state in the Caucasus region of Eurasia. Located at the crossroads of Western Asia and Eastern Europe, it is bounded to the west by the Black Sea, to the north by Russia, to the southwest by Turkey, to the south by Armenia, and to the southeast by Azerbaijan. The capital of...
. Executive power
Executive Power
Executive Power is Vince Flynn's fifth novel, and the fourth to feature Mitch Rapp, an American agent that works for the CIA as an operative for a covert counter terrorism unit called the "Orion Team."-Plot summary:...
is split between the President and the Prime Minister
Prime Minister of Georgia
The Prime Minister of Georgia is the most senior minister within the Cabinet of Georgia, appointed by the President of Georgia. The official title of the Head of the Government of Georgia has varied throughout history, however, the duties and functions of the leader have changed only marginally....
, who is the head of government
Head of government
Head of government is the chief officer of the executive branch of a government, often presiding over a cabinet. In a parliamentary system, the head of government is often styled prime minister, chief minister, premier, etc...
. The office was first introduced by the Supreme Council of the Republic of Georgia
Supreme Council of the Republic of Georgia
The Supreme Council of the Republic of Georgia was the highest unicameral legislative body in Georgia elected in the first democratic, multiparty elections in the Caucasus in October 1990 while the country was still part of the Soviet Union. The Council presided over the declaration of Georgia’s...
on April 14, 1991, 5 days after Georgia's declaration of independence from the Soviet Union
Soviet Union
The Soviet Union , officially the Union of Soviet Socialist Republics , was a constitutionally socialist state that existed in Eurasia between 1922 and 1991....
. The President serves a five-year term. The incumbent is Mikheil Saakashvili
Mikheil Saakashvili
Mikheil Saakashvili is a Georgian politician, the third and current President of Georgia and leader of the United National Movement Party.Involved in the national politics since 1995, Saakashvili became president on 25 January 2004 after President Eduard Shevardnadze resigned in a November 2003...
.

The President of Georgia is elected on the basis of universal, equal and direct suffrage
Suffrage
Suffrage, political franchise, or simply the franchise, distinct from mere voting rights, is the civil right to vote gained through the democratic process...
by secret ballot
Secret ballot
The secret ballot is a voting method in which a voter's choices in an election or a referendum are anonymous. The key aim is to ensure the voter records a sincere choice by forestalling attempts to influence the voter by intimidation or bribery. The system is one means of achieving the goal of...
, for a period of five years. The President may not be elected for more than two consecutive terms. Any citizen of Georgia who has the right to vote and who has attained the age of 35 years and lived in Georgia for no less than 15 years, is eligible to be elected President. The President of Georgia shall not have the right to hold any other position except for a party position, engage in entrepreneurial activity, receive salary or another permanent remuneration for any other activity.

The President of Georgia concludes international treaties and agreements and conducts negotiations with foreign states; with the consent of Parliament, appoints and dismisses Georgian ambassadors and other diplomatic representatives; receives the credentials of ambassadors and other diplomatic representatives of foreign states and international organizations; with the consent of Parliament
Parliament of Georgia
Parliament of Georgia is the supreme legislature of Georgia. It is unicameral and has 150 members, known as deputies, from which 75 members are proportional representatives and 75 are elected through single-member district plurality system, representing their constituencies...
, appoints Prime Minister and members of the Government; is empowered to remove ministers from their posts; submits to Parliament the draft state budget, after agreeing upon its basic content with parliamentary committees; declares a martial law
Martial law
Martial law is the imposition of military rule by military authorities over designated regions on an emergency basis— only temporary—when the civilian government or civilian authorities fail to function effectively , when there are extensive riots and protests, or when the disobedience of the law...
and state of emergency
State of emergency
A state of emergency is a governmental declaration that may suspend some normal functions of the executive, legislative and judicial powers, alert citizens to change their normal behaviours, or order government agencies to implement emergency preparedness plans. It can also be used as a rationale...
; with the consent of Parliament has the right to halt the activities of representative bodies of self-government or territorial units as well as of state bodies; signs and promulgates laws; has the right to dissolve Parliament under certain conditions set by the Constitution; decides questions of citizenship
Citizenship
Citizenship is the state of being a citizen of a particular social, political, national, or human resource community. Citizenship status, under social contract theory, carries with it both rights and responsibilities...
and the granting of political asylum; grants pardons; schedules elections to Parliament and other representative bodies; has the right to revoke acts of subordinate executive bodies; is the Supreme Commander-in-Chief of the Armed Forces; and appoints members of the National Security Council
National Security Council of Georgia
The National Security Council of Georgia is an advisory body for the President of Georgia dealing with matters of national security. The current Secretary of the National Security Council of Georgia is Giga Bokeria.-Legal authority:...
, chairs its meetings, and appoints and dismisses military commanders.

On the third Sunday after the presidential elections the inauguration
Inauguration
An inauguration is a formal ceremony to mark the beginning of a leader's term of office. An example is the ceremony in which the President of the United States officially takes the oath of office....
is held. The President takes an oath
Oath
An oath is either a statement of fact or a promise calling upon something or someone that the oath maker considers sacred, usually God, as a witness to the binding nature of the promise or the truth of the statement of fact. To swear is to take an oath, to make a solemn vow...
before God and the Nation:

The standard is the adapted national flag of Georgia
Flag of Georgia (country)
The official flag of Georgia is the "five-cross flag", restored to official use on January 14, 2004, after a break of some 500 years...
, charged in the center with the Georgian coat of arms
Coat of arms of Georgia (country)
The coat of arms of the Republic of Georgia was adopted on 1 October 2004. It is partially based on the medieval arms of the Georgian royal house of Bagrationi....
. Copies of the standard are used inside his office, at the Chancellary Building, other state agencies, and while the president is traveling in a vehicle inside Georgia.

After Georgia formally seceded from the Soviet Union on April 9, 1991, the Supreme Council
Supreme Council of the Republic of Georgia
The Supreme Council of the Republic of Georgia was the highest unicameral legislative body in Georgia elected in the first democratic, multiparty elections in the Caucasus in October 1990 while the country was still part of the Soviet Union. The Council presided over the declaration of Georgia’s...
voted, on April 14, to create the post of executive President, and appointed Zviad Gamsakhurdia
Zviad Gamsakhurdia
Zviad Gamsakhurdia was a dissident, scientist and writer, who became the first democratically elected President of the Republic of Georgia in the post-Soviet era...
to the office pending the holding of direct elections. In the nationwide elections to this post, on May 26, 1991, Gamsakhurdia won a landslide victory, becoming the first President of the Republic of Georgia. Gamsakhurdia was ousted in a military coup d’etat in January 1992. He continued to function as a president-in-exile until his death in a failed attempt to regain power in December 1993. In the post-coup absence of legitimate power, a position of the Head of State was introduced for Georgia's new leader Eduard Shevardnadze
Eduard Shevardnadze
Eduard Shevardnadze is a former Soviet, and later, Georgian statesman from the height to the end of the Cold War. He served as President of Georgia from 1995 to 2003, and as First Secretary of the Georgian Communist Party , from 1972 to 1985. Shevardnadze was responsible for many top decisions on...
on March 10, 1992. After the adoption of a new Constitution on August 24, 1995, the post of President was restored. Shevardnadze was elected to presidency on November 5, 1995, and reelected on April 9, 2000. He resigned under pressure of mass demonstrations known as Rose Revolution
Rose Revolution
The "Revolution of Roses" was a change of power in Georgia in November 2003, which took place after having widespread protests over the disputed parliamentary elections...
on November 23, 2003. After Nino Burjanadze
Nino Burjanadze
Nino Burjanadze is a Georgian politician and lawyer who served as Chairperson of the Parliament of Georgia from November 2001 to June 2008...
’s brief tenure as an Acting President
Acting president
An Acting President is a person who temporarily fills the role of an organization's or country's president, either when the real president is unavailable or when the post is vacant .-See also:*Acting *Acting President of Pakistan*Acting President of Malta*Acting President of...
, Mikheil Saakashvili
Mikheil Saakashvili
Mikheil Saakashvili is a Georgian politician, the third and current President of Georgia and leader of the United National Movement Party.Involved in the national politics since 1995, Saakashvili became president on 25 January 2004 after President Eduard Shevardnadze resigned in a November 2003...
was elected on January 4, 2004. He did not serve his full first term, but voluntarily resigned to defuse tensions in the aftermath of the 2007 Georgian demonstrations
2007 Georgian demonstrations
The 2007 Georgian demonstrations were a series of anti-government protests in Georgia. The demonstrations peaked on November 2, 2007, when 50,000-100,000 rallied in downtown Tbilisi, capital of Georgia. People protested against the allegedly corrupt government of president Mikheil Saakashvili...
and brought the presidential elections forward from the original date in autumn 2008. He was reelected on January 5, 2008.

For leaders before independence, see List of leaders of Georgia