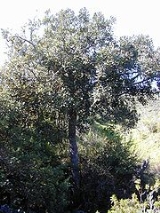 Encyclopedia
Pouteria is a genus
Genus
In biology, a genus is a low-level taxonomic rank used in the biological classification of living and fossil organisms, which is an example of definition by genus and differentia...
of flowering
Flowering plant
The flowering plants , also known as Angiospermae or Magnoliophyta, are the most diverse group of land plants. Angiosperms are seed-producing plants like the gymnosperms and can be distinguished from the gymnosperms by a series of synapomorphies...
tree
Tree
A tree is a perennial woody plant. It is most often defined as a woody plant that has many secondary branches supported clear of the ground on a single main stem or trunk with clear apical dominance. A minimum height specification at maturity is cited by some authors, varying from 3 m to...
s in the gutta-percha
Gutta-percha
Gutta-percha is a genus of tropical trees native to Southeast Asia and northern Australasia, from Taiwan south to the Malay Peninsula and east to the Solomon Islands. The same term is used to refer to an inelastic natural latex produced from the sap of these trees, particularly from the species...
family
Family (biology)
In biological classification, family is* a taxonomic rank. Other well-known ranks are life, domain, kingdom, phylum, class, order, genus, and species, with family fitting between order and genus. As for the other well-known ranks, there is the option of an immediately lower rank, indicated by the...
, Sapotaceae
Sapotaceae
Sapotaceae is a family of flowering plants, belonging to order Ericales. The family includes approximately 800 species of evergreen trees and shrubs in approximately 65 genera . Distribution is pantropical....
. The genus is widespread throughout the tropical regions of the world. It includes the Canistel (P. campechiana), the Mamey Sapote (P. sapota
Mamey sapote
The mamey sapote is a species of tree native to southern Mexico. Today, the tree is cultivated not only in Mexico, but also in Central America, the Caribbean, and South Florida for its fruit, which is commonly eaten in many Latin American countries...
) and the Lúcuma
Lúcuma
The lúcuma is a subtropical fruit native to the Peru's Andean region. Lucuma has been found on ceramics at burial sites of the indigenous people of coastal Peru...
(P. splendens). Commonly, this genus is known as pouteria trees or, in some cases, eggfruits.

Pouteria is related to Manilkara
Manilkara
Manilkara is a genus of trees in the family Sapotaceae. Collectively known as manilkara trees, they occur throughout the tropics. A close relative is the genus Pouteria....
, another genus that produces hard and heavy woods (e.g. Balatá
Balatá
Manilkara bidentata is a species of Manilkara native to a large area of northern South America, Central America and the Caribbean. Common names include balatá, ausubo, massaranduba, and "cow-tree"....
, M. bidentata) much used in heavy or outdoors construction, as well as edible fruit
Fruit
In broad terms, a fruit is a structure of a plant that contains its seeds.The term has different meanings dependent on context. In non-technical usage, such as food preparation, fruit normally means the fleshy seed-associated structures of certain plants that are sweet and edible in the raw state,...
(such as Sapodilla
Sapodilla
Manilkara zapota, commonly known as the sapodilla, is a long-lived, evergreen tree native to southern Mexico, Central America and the Caribbean. An example natural occurrence is in coastal Yucatan in the Petenes mangroves ecoregion, where it is a subdominant plant species...
, M. zapota).

Many species, like Pouteria maclayana have edible fruit
Fruit
In broad terms, a fruit is a structure of a plant that contains its seeds.The term has different meanings dependent on context. In non-technical usage, such as food preparation, fruit normally means the fleshy seed-associated structures of certain plants that are sweet and edible in the raw state,...
s and are important foods seasonally. Some are being commercially collected and sold on local markets or packed in tin cans
Canning
Canning is a method of preserving food in which the food contents are processed and sealed in an airtight container. Canning provides a typical shelf life ranging from one to five years, although under specific circumstances a freeze-dried canned product, such as canned, dried lentils, can last as...
.

Pouteria species yield hard, heavy, resilient woods used as firewood
Firewood
Firewood is any wood-like material that is gathered and used for fuel. Generally, firewood is not highly processed and is in some sort of recognizable log or branch form....
, timber
Timber
Timber may refer to:* Timber, a term common in the United Kingdom and Australia for wood materials * Timber, Oregon, an unincorporated community in the U.S...
, but particularly in outdoor and naval construction, such as dock
Dock (maritime)
A dock is a human-made structure or group of structures involved in the handling of boats or ships, usually on or close to a shore.However, the exact meaning varies among different variants of the English language...
pilings, decking
Deck (ship)
A deck is a permanent covering over a compartment or a hull of a ship. On a boat or ship, the primary deck is the horizontal structure which forms the 'roof' for the hull, which both strengthens the hull and serves as the primary working surface...
s, etc. Some species like abiu (P. caimito), are considered to be shipworm
Shipworm
Shipworms are not worms at all, but rather a group of unusual saltwater clams with very small shells, notorious for boring into wooden structures that are immersed in sea water, such as piers, docks and wooden ships...
resistant; however, this depends on the silica content which may vary from 0-0.9%. The weight by volume (at 12% moisture content) of Pouteria wood can be in excess of 1140 kilograms per cubic metre (71 pounds per cubic feet); thus, the wood sinks in water. The wood of Pouteria species is apt to considerable movement and warping when they dry out. But in its main use, naval construction, this is not a problem, since the wood never gets really dry.

The vessel element
Vessel element
A vessel element is one of the cell types found in xylem, the water conducting tissue of plants. Vessel elements are typically found in the angiosperms but absent from most gymnosperms such as the conifers....
s are relatively small and usually 2-4-seriate; the medullary ray
Medullary ray (botany)
In botany, Medullary rays refer to a characteristic found in woods. In this context the term refers to radial sheets or ribbons extending vertically through the tree across and perpendicular to the growth rings. Also called pith rays or wood rays, these formations of primarily parenchyma cells...
s are fine and close together. Pouteria woods are capable of attaining an excellent polish using fine-grained sandpaper
Sandpaper
Sandpaper, also known as glasspaper, is a heavy paper with abrasive material attached to its surface.Sandpaper is part of the "coated abrasives" family of abrasive products. It is used to remove small amounts of material from surfaces, either to make them smoother , to remove a layer of material...
and possibly some wax. They can sometimes show an attractive figure of dark stripes against a sandy to mid-brown background colour. However, the wood is hardly used for furniture because it is so dense that items made from it would be difficult to transport. Moreover, it is nearly impossible to work using hand tools. Even using power tool
Power tool
A power tool is a tool that is actuated by an additional power source and mechanism other than the solely manual labour used with hand tools. The most common types of power tools use electric motors. Internal combustion engines and compressed air are also commonly used...
s, working these woods presents some problems as well, but given some patience and practical knowledge, these can easily be solved.

What does present a problem is that in order for the silica to be effective against shipworms it needs to dry to some degree in order to harden. When the wood is continually waterlogged this process may take place very slowly or not at all, leaving the wood vulnerable.

Pouteria foliage is used as food by some Lepidoptera
Lepidoptera
Lepidoptera is a large order of insects that includes moths and butterflies . It is one of the most widespread and widely recognizable insect orders in the world, encompassing moths and the three superfamilies of butterflies, skipper butterflies, and moth-butterflies...
caterpillar
Caterpillar
Caterpillars are the larval form of members of the order Lepidoptera . They are mostly herbivorous in food habit, although some species are insectivorous. Caterpillars are voracious feeders and many of them are considered to be pests in agriculture...
s, including those of the dalcerid moth
Dalceridae
Dalceridae is a small family of moths with 84 known species. They are mostly found in the Neotropical region with a few reaching the far south of the Nearctic region.These are generally small or medium-sized moths with very hairy bodies...
Dalcera abrasa which has been recorded on P. ramiflora. The fruits are important food for various animals, such as the Rock-haunting Ringtail Possum
Rock-haunting Ringtail Possum
The Rock-haunting Ringtail Possum , also known as the Rock Ringtail Possum, is a species of Australian possum. It is found in rocky escarpments in the Kimberley, Arnhem Land and Gulf of Carpentaria across Western Australia and Northern Territory and just passing the Queensland border. It is also...
(Petropseudes dahli).

Due to habitat loss and in some cases overexploitation
Overexploitation
Overexploitation, also called overharvesting, refers to harvesting a renewable resource to the point of diminishing returns. Sustained overexploitation can lead to the destruction of the resource...
, many species of Pouteria are threatened. At least about 10 are close to extinction, and one – the Rio de Janeiro Pouteria (P. stenophylla
Pouteria stenophylla
Pouteria stenophylla was a species of plant in the Sapotaceae family. It was endemic to Brazil. It became extinct due to habitat loss.-Source:* Pires O'Brien, J. 1998. . Downloaded on 23 August 2007....
), which grew near Rio de Janeiro
Rio de Janeiro
Rio de Janeiro , commonly referred to simply as Rio, is the capital city of the State of Rio de Janeiro, the second largest city of Brazil, and the third largest metropolitan area and agglomeration in South America, boasting approximately 6.3 million people within the city proper, making it the 6th...
in Brazil
Brazil
Brazil , officially the Federative Republic of Brazil , is the largest country in South America. It is the world's fifth largest country, both by geographical area and by population with over 192 million people...
– is now extinct.

Pouteria is a "wastebasket taxon", and its size is continually being expanded or decreased. The segregate
Segregate (taxonomy)
In taxonomy, a segregate, or a segregate taxon is created when a taxon is split off, from another taxon. This other taxon will be better known, usually bigger, and will continue to exist, even after the segregate taxon has been split off...
Labatia, described by Olof Swartz
Olof Swartz
Olof Peter Swartz was a Swedish botanist and taxonomist. He is best known for his taxonomic work and studies into pteridophytes...
in 1788 and named after the French botanist Jean-Baptiste Labat
Jean-Baptiste Labat
Jean-Baptiste Labat was a French clergyman, botanist, writer, explorer, ethnographer, soldier, engineer, and landowner.-Life:...
, was maintained as a distinct entity until the 1930s, when it was finally synonymized with Pouteria for good. Most segregate genera that were eventually merged with Pouteria again were established by Henri Ernest Baillon
Henri Ernest Baillon
Henri Ernest Baillon was a French botanist and physician. He was born in Calais on November 30, 1827 and died in Paris on July 19, 1895.Baillon spent his professional life as a professor of natural history, and he published numerous works on botany...
and Jean Baptiste Louis Pierre
Jean Baptiste Louis Pierre
Jean Baptiste Louis Pierre , also known as J. B. Louis Pierre, was a French botanist known for his Asian studies....
.

Due to the uncertainty regarding its actual content, the number of synonyms of Pouteria is massive – at least when the genus is defined in the expanded sense:
In addition, the following genera are sometimes included in Pouteria too: