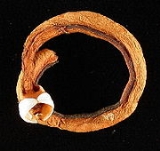 Encyclopedia
Shipworms are not worms at all, but rather a group of unusual saltwater clam
Clam
The word "clam" can be applied to freshwater mussels, and other freshwater bivalves, as well as marine bivalves.In the United States, "clam" can be used in several different ways: one, as a general term covering all bivalve molluscs...
s with very small shells, notorious for boring into (and eventually destroying) wooden structures that are immersed in sea water, such as piers, docks and wooden ships. Sometimes called "termites of the sea", they are marine bivalve molluscs (Eulamellibranchiata) in the family Teredinidae, also often known as Teredo Worms.

When shipworms bore into submerged wood, bacteria (Teredinibacter turnerae strain ATCC 39867 / T7901) in a special organ called the gland of Deshayes
Gérard Paul Deshayes
Gérard Paul Deshayes was a French geologist and conchologist.He was born in Nancy, his father at that time being professor of experimental physics in the École Centrale of the Meurthe département....
allow them to digest cellulose
Cellulose
Cellulose is an organic compound with the formula , a polysaccharide consisting of a linear chain of several hundred to over ten thousand β linked D-glucose units....
. The excavated burrow is usually lined with a calcareous
Calcareous
Calcareous is an adjective meaning mostly or partly composed of calcium carbonate, in other words, containing lime or being chalky. The term is used in a wide variety of scientific disciplines.-In zoology:...
tube. Shipworms have slender worm-like forms, but nonetheless possess the characteristic structures of bivalves. The valves of the shell of shipworms are small separate parts located at the anterior end of the worm, used for excavating the burrow.

The shipworms belong to several genera
Genus
In biology, a genus is a low-level taxonomic rank used in the biological classification of living and fossil organisms, which is an example of definition by genus and differentia...
, of which Teredo is the most commonly mentioned. The best known species is Teredo navalis. Historically, Teredo concentrations in the Caribbean Sea
Caribbean Sea
The Caribbean Sea is a sea of the Atlantic Ocean located in the tropics of the Western hemisphere. It is bounded by Mexico and Central America to the west and southwest, to the north by the Greater Antilles, and to the east by the Lesser Antilles....
have been substantially higher than in most other salt water bodies.

Shipworms greatly damage wooden hulls and marine piling, and have been the subject of much study to find methods to avoid their attacks. Copper sheathing
Copper sheathing
Copper sheathing was the practice of protecting the under-water hull of a ship or boat through the use of copper plates affixed to the outside of the hull. It was pioneered and developed by the Royal Navy during the 18th century.-Development:...
was used on wooden ships in the latter 18th century and afterwards, as a method of preventing damage by "teredo worms". The first historically documented use of copper sheathing were experiments held by the British Royal Navy with HMS Alarm
HMS Alarm (1758)
HMS Alarm was a 32-gun fifth rate Niger-class frigate of the Royal Navy, and was the first Royal Navy ship to bear this name. Copper-sheathed in 1761, she was the first ship in the Royal Navy to have a fully copper-sheathed hull....
, which was coppered in 1761 and thoroughly inspected after a two year cruise. In a letter from the Navy Board to the Admiralty dated 31 August 1763 it was written "that so long as copper plates can be kept upon the bottom, the planks will be thereby entirely secured from the effects of the worm."

In the Netherlands
Netherlands
The Netherlands is a constituent country of the Kingdom of the Netherlands, located mainly in North-West Europe and with several islands in the Caribbean. Mainland Netherlands borders the North Sea to the north and west, Belgium to the south, and Germany to the east, and shares maritime borders...
the shipworm caused a crisis in the 18th century by attacking the timber that faced the sea dikes. After that the dykes had to be faced with stones. Teredo has recently caused several minor collapses along the Hudson River
Hudson River
The Hudson is a river that flows from north to south through eastern New York. The highest official source is at Lake Tear of the Clouds, on the slopes of Mount Marcy in the Adirondack Mountains. The river itself officially begins in Henderson Lake in Newcomb, New York...
waterfront in Hoboken, New Jersey
Hoboken, New Jersey
Hoboken is a city in Hudson County, New Jersey, United States. As of the 2010 United States Census, the city's population was 50,005. The city is part of the New York metropolitan area and contains Hoboken Terminal, a major transportation hub for the region...
, due to damage of underwater pilings.

More recently, the endosymbionts that are found in the gills have been subject to study the bioconversion of cellulose for fuel energy research.

Genera within the family Teridinidae include: 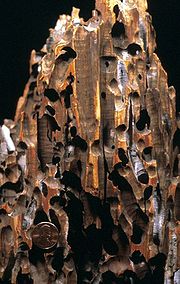 In the early 19th century, the behaviour and anatomy of the shipworm inspired the French engineer
Engineer
An engineer is a professional practitioner of engineering, concerned with applying scientific knowledge, mathematics and ingenuity to develop solutions for technical problems. Engineers design materials, structures, machines and systems while considering the limitations imposed by practicality,...
Marc Brunel
Marc Isambard Brunel
Sir Marc Isambard Brunel, FRS FRSE was a French-born engineer who settled in England. He preferred the name Isambard, but is generally known to history as Marc to avoid confusion with his more famous son Isambard Kingdom Brunel...
. Based on his observations of how the shipworm's valves simultaneously enable it to tunnel through wood and protect it from being crushed by the swelling timber, Brunel designed an ingenious modular iron tunnelling framework—a tunnelling shield
Tunnelling shield
A tunnelling shield is a protective structure used in the excavation of tunnels through soil that is too soft or fluid to remain stable during the time it takes to line the tunnel with a support structure of concrete, cast iron or steel...
—which enabled workers to tunnel successfully through the highly unstable river bed beneath the Thames. The Thames Tunnel
Thames Tunnel
The Thames Tunnel is an underwater tunnel, built beneath the River Thames in London, United Kingdom, connecting Rotherhithe and Wapping. It measures 35 feet wide by 20 feet high and is 1,300 feet long, running at a depth of 75 feet below the river's surface...
was the first successful large tunnel ever built under a navigable river.

In Palawan
Palawan
Palawan is an island province of the Philippines located in the MIMAROPA region or Region 4. Its capital is Puerto Princesa City, and it is the largest province in the country in terms of total area of jurisdiction. The islands of Palawan stretch from Mindoro in the northeast to Borneo in the...
and Aklan
Aklan
Aklan is a province of the Philippines located in the Western Visayas. Its capital is Kalibo. It is located at the northwest portion of Panay Island, bordering Antique Province to the southwest, and Capiz Province to the east...
in the Philippines
Philippines
The Philippines , officially known as the Republic of the Philippines , is a country in Southeast Asia in the western Pacific Ocean. To its north across the Luzon Strait lies Taiwan. West across the South China Sea sits Vietnam...
, the shipworm is called tamilok and is eaten as a delicacy there. It is prepared as kinilaw—that is, raw (cleaned) with vinegar or lime juice, chopped chili pepper
Chili pepper
Chili pepper is the fruit of plants from the genus Capsicum, members of the nightshade family, Solanaceae. The term in British English and in Australia, New Zealand, India, Malaysia and other Asian countries is just chilli without pepper.Chili peppers originated in the Americas...
s and onions, very similar to ceviche
Ceviche
Ceviche is a seafood dish popular in the coastal regions of the Americas, especially Central and South America. The dish is typically made from fresh raw fish marinated in citrus juices such as lemon or lime and spiced with chilli peppers. Additional seasonings such as onion, salt,...
. The taste of the flesh has been compared to a wide variety of foods, from milk
Milk
Milk is a white liquid produced by the mammary glands of mammals. It is the primary source of nutrition for young mammals before they are able to digest other types of food. Early-lactation milk contains colostrum, which carries the mother's antibodies to the baby and can reduce the risk of many...
to oysters.