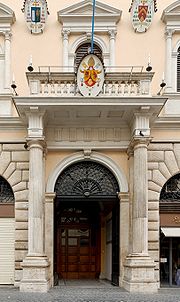 The diplomatic service of the Holy See can be traced back to the First Council of Nicaea
First Council of Nicaea
The First Council of Nicaea was a council of Christian bishops convened in Nicaea in Bithynia by the Roman Emperor Constantine I in AD 325...
when Pope Sylvester I sent legates to represent him during the discussions of the council. The present Academy was created as the Pontifical Academy of Ecclesiastical Nobles in 1701 by Abbot
Abbot
The word abbot, meaning father, is a title given to the head of a monastery in various traditions, including Christianity. The office may also be given as an honorary title to a clergyman who is not actually the head of a monastery...
Pietro Garagni.

Located inside Palazzo Severoli, Piazza della Minerva
Piazza della Minerva
Piazza della Minerva is a piazza in Rome, Italy, near the Pantheon. Its name derives from the existence of a temple built on the site by Pompey dedicated to Minerva Calcidica, whose statue is now in the Vatican Museums.-Features:Facing this piazza are:...
, central Rome
Rome
Rome is the capital of Italy and the country's largest and most populated city and comune, with over 2.7 million residents in . The city is located in the central-western portion of the Italian Peninsula, on the Tiber River within the Lazio region of Italy.Rome's history spans two and a half...
, the Pontifical Ecclesiastical Academy trains Catholic priest
Priest
A priest is a person authorized to perform the sacred rites of a religion, especially as a mediatory agent between humans and deities. They also have the authority or power to administer religious rites; in particular, rites of sacrifice to, and propitiation of, a deity or deities...
s sent by their bishop
Bishop
A bishop is an ordained or consecrated member of the Christian clergy who is generally entrusted with a position of authority and oversight. Within the Catholic Church, Eastern Orthodox, Oriental Orthodox Churches, in the Assyrian Church of the East, in the Independent Catholic Churches, and in the...
from different parts of the world to study ecclesiastical and international diplomacy
Diplomacy
Diplomacy is the art and practice of conducting negotiations between representatives of groups or states...
, particularly in order that the alumni may later be selected to serve in the Diplomatic posts of the Holy See
Holy See
The Holy See is the episcopal jurisdiction of the Catholic Church in Rome, in which its Bishop is commonly known as the Pope. It is the preeminent episcopal see of the Catholic Church, forming the central government of the Church. As such, diplomatically, and in other spheres the Holy See acts and...
—ultimately as a papal nuncio
Nuncio
Nuncio is an ecclesiastical diplomatic title, derived from the ancient Latin word, Nuntius, meaning "envoy." This article addresses this title as well as derived similar titles, all within the structure of the Roman Catholic Church...
, or ambassador. Many leaders of the church have been alumni of the academy, including Pope
Pope
The Pope is the Bishop of Rome, a position that makes him the leader of the worldwide Catholic Church . In the Catholic Church, the Pope is regarded as the successor of Saint Peter, the Apostle...
s Clement XIII
Pope Clement XIII
Pope Clement XIII , born Carlo della Torre di Rezzonico, was Pope from 16 July 1758 to 2 February 1769....
, Leo XII
Pope Leo XII
Pope Leo XII , born Annibale Francesco Clemente Melchiore Girolamo Nicola Sermattei della Genga, was Pope from 1823 to 1829.-Life:...
, Leo XIII
Pope Leo XIII
Pope Leo XIII , born Vincenzo Gioacchino Raffaele Luigi Pecci to an Italian comital family, was the 256th Pope of the Roman Catholic Church, reigning from 1878 to 1903...
, Benedict XV
Pope Benedict XV
Pope Benedict XV , born Giacomo Paolo Giovanni Battista della Chiesa, reigned as Pope from 3 September 1914 to 22 January 1922...
, and Paul VI
Pope Paul VI
Paul VI , born Giovanni Battista Enrico Antonio Maria Montini , reigned as Pope of the Catholic Church from 21 June 1963 until his death on 6 August 1978. Succeeding Pope John XXIII, who had convened the Second Vatican Council, he decided to continue it...
.

Students spend four years at the academy; two years earning a licentiate in canon from a Roman University (such as the Pontifical Gregorian University
Pontifical Gregorian University
The Pontifical Gregorian University is a pontifical university located in Rome, Italy.Heir of the Roman College founded by Saint Ignatius of Loyola over 460 years ago, the Gregorian University was the first university founded by the Jesuits...
), then two years earning a doctrate in canon law
Canon law
Canon law is the body of laws & regulations made or adopted by ecclesiastical authority, for the government of the Christian organization and its members. It is the internal ecclesiastical law governing the Catholic Church , the Eastern and Oriental Orthodox churches, and the Anglican Communion of...
. If the students that have been recruited already have a JCD then their time at the PEA is shortened to two years. The courses are usually in diplomatic history and languages and diplomatic writing. Courses at the PEA are not aimed at being awarded a degree but there is an oral and written exam.

The current President of the academy is Archbishop Beniamino Stella.