Common plastic explosives include Semtex
Semtex
Semtex is a general-purpose plastic explosive containing RDX and PETN. It is used in commercial blasting, demolition, and in certain military applications. Semtex became notoriously popular with terrorists because it was, until recently, extremely difficult to detect, as in the case of Pan Am...
and C-4
C-4 (explosive)
C4 or Composition C4 is a common variety of the plastic explosive known as Composition C.-Composition and manufacture:C4 is made up of explosives, plastic binder, plasticizer and usually marker or odorizing taggant chemicals such as 2,3-dimethyl-2,3-dinitrobutane to help detect the explosive and...
. Plastic explosives are especially suited for explosive demolition
Demolition
Demolition is the tearing-down of buildings and other structures, the opposite of construction. Demolition contrasts with deconstruction, which involves taking a building apart while carefully preserving valuable elements for re-use....
as they can be easily formed into the best shapes for cutting structural members and have a high enough velocity of detonation and density
Density
The mass density or density of a material is defined as its mass per unit volume. The symbol most often used for density is ρ . In some cases , density is also defined as its weight per unit volume; although, this quantity is more properly called specific weight...
for metal cutting work. They are generally not used for ordinary blasting as they tend to be significantly more expensive than other materials that perform just as well in that field. Also, when an explosive is combined with a plasticizer
Plasticizer
Plasticizers or dispersants are additives that increase the plasticity or fluidity of the material to which they are added; these include plastics, cement, concrete, wallboard, and clay. Although the same compounds are often used for both plastics and concretes the desired effects and results are...
, its power is generally lower than when it is pure.

Plastic explosive is commonly used for the demolition of obstacles and fortification
Fortification
Fortifications are military constructions and buildings designed for defence in warfare and military bases. Humans have constructed defensive works for many thousands of years, in a variety of increasingly complex designs...
s by engineer
Engineer
An engineer is a professional practitioner of engineering, concerned with applying scientific knowledge, mathematics and ingenuity to develop solutions for technical problems. Engineers design materials, structures, machines and systems while considering the limitations imposed by practicality,...
s and combat engineers, an early use being the warhead of the British Armoured Vehicle Royal Engineers
Armoured Vehicle Royal Engineers
Armoured Vehicle Royal Engineers is the title given to a series of armoured vehicles operated by the Royal Engineers for the purpose of battlefield engineer support. These vehicles have been either purpose-built or post-production modifications of existing tank-based armoured vehicles...
's (AVRE)'s 'Petard' demolition mortar, used to destroy concrete fortifications encountered during Operation Overlord
Operation Overlord
Operation Overlord was the code name for the Battle of Normandy, the operation that launched the invasion of German-occupied western Europe during World War II by Allied forces. The operation commenced on 6 June 1944 with the Normandy landings...
(D-Day). The original use of Nobel 808 not supplied by the SOE was for sabotage
Sabotage
Sabotage is a deliberate action aimed at weakening another entity through subversion, obstruction, disruption, or destruction. In a workplace setting, sabotage is the conscious withdrawal of efficiency generally directed at causing some change in workplace conditions. One who engages in sabotage is...
of German installations and railways in Occupied Europe. The most common commercial use of plastic explosives is for shock hardening
Shock hardening
Shock hardening is a process used to strengthen metals and alloys, wherein a shock wave produces atomic-scale defects in the material's crystalline structure. As in cold work, these defects interfere with the normal processes by which metallic materials yield , making materials stiffer, but more...
high manganese
Manganese
Manganese is a chemical element, designated by the symbol Mn. It has the atomic number 25. It is found as a free element in nature , and in many minerals...
percentage steel. This material is typically used for train rail components and earth digging implements.

Some terrorist
Terrorism
Terrorism is the systematic use of terror, especially as a means of coercion. In the international community, however, terrorism has no universally agreed, legally binding, criminal law definition...
groups have used plastic explosives. In October 2000, terrorists used C-4 to attack
USS Cole bombing
The USS Cole Bombing, or the USS Cole Incident, was a suicide attack against the United States Navy destroyer on October 12, 2000 while it was harbored and refueled in the Yemeni port of Aden. Seventeen American sailors were killed, and 39 were injured...
the USS Cole
USS Cole (DDG-67)
The second USS Cole is an Arleigh Burke-class Aegis-equipped guided missile destroyer homeported in NS Norfolk, Virginia. The Cole is named in honor of Marine Sergeant Darrell S. Cole, a machine-gunner killed in action on Iwo Jima on 19 February 1945, during World War II...
, killing 17 sailors In 1996, terrorists used C-4 to blow up the Khobar Towers
Khobar Towers bombing
The Khobar Towers bombing was a terrorist attack on part of a housing complex in the city of Khobar, Saudi Arabia, located near the national oil company headquarters of Dhahran. In 1996, Khobar Towers was being used to house foreign military personnel.Al-Qaeda has incorrectly been described by...
U.S. military housing complex in Saudi Arabia. 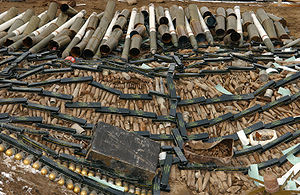 The first plastic explosive was gelignite
Gelignite
Gelignite, also known as blasting gelatin or simply jelly, is an explosive material consisting of collodion-cotton dissolved in either nitroglycerine or nitroglycol and mixed with wood pulp and saltpetre .It was invented in 1875 by Alfred Nobel, who had earlier invented dynamite...
, invented by Alfred Nobel
Alfred Nobel
Alfred Bernhard Nobel was a Swedish chemist, engineer, innovator, and armaments manufacturer. He is the inventor of dynamite. Nobel also owned Bofors, which he had redirected from its previous role as primarily an iron and steel producer to a major manufacturer of cannon and other armaments...
in 1875.

Prior to World War I
World War I
World War I , which was predominantly called the World War or the Great War from its occurrence until 1939, and the First World War or World War I thereafter, was a major war centred in Europe that began on 28 July 1914 and lasted until 11 November 1918...
, the British explosives chemist Oswald Silberrad obtained British and U.S. patents for a series of plastic explosives called "Nitrols", composed of nitrated aromatics
Aromaticity
In organic chemistry, Aromaticity is a chemical property in which a conjugated ring of unsaturated bonds, lone pairs, or empty orbitals exhibit a stabilization stronger than would be expected by the stabilization of conjugation alone. The earliest use of the term was in an article by August...
, collodion
Collodion
Collodion is a flammable, syrupy solution of pyroxylin in ether and alcohol. There are two basic types; flexible and non-flexible. The flexible type is often used as a surgical dressing or to hold dressings in place. When painted on the skin, collodion dries to form a flexible cellulose film...
, and oxidising inorganic salts. The language of the patents indicate that at this time, Silberrad saw no need to explain to "those versed in the art" either what he meant by plasticity nor why it may be advantageous, as he only explains why his plastic explosive is superior to others of that type.

One of the simplest plastic explosives was Nobel's Explosive No. 808, also known as Nobel 808 (often just called Explosive 808 in the British Armed Forces
British Armed Forces
The British Armed Forces are the armed forces of the United Kingdom of Great Britain and Northern Ireland.Also known as Her Majesty's Armed Forces and sometimes legally the Armed Forces of the Crown, the British Armed Forces encompasses three professional uniformed services, the Royal Navy, the...
during the Second World War), developed by the British company Nobel Chemicals Ltd well before World War II. It had the appearance of green plasticine
Plasticine
Plasticine, a brand of modelling clay, is a putty-like modelling material made from calcium salts, petroleum jelly and aliphatic acids. The name is a registered trademark of Flair Leisure Products plc...
with a distinctive smell of almonds. During World War II it was extensively used by the British Special Operations Executive
Special Operations Executive
The Special Operations Executive was a World War II organisation of the United Kingdom. It was officially formed by Prime Minister Winston Churchill and Minister of Economic Warfare Hugh Dalton on 22 July 1940, to conduct guerrilla warfare against the Axis powers and to instruct and aid local...
(SOE) for sabotage missions. It is also the explosive used in HESH anti-tank shells. Captured SOE-supplied Nobel 808 was the explosive used in the failed 20 July plot assassination attempt on Adolf Hitler
Adolf Hitler
Adolf Hitler was an Austrian-born German politician and the leader of the National Socialist German Workers Party , commonly referred to as the Nazi Party). He was Chancellor of Germany from 1933 to 1945, and head of state from 1934 to 1945...
in 1944.

During and after World War II a number of new RDX
RDX
RDX, an initialism for Research Department Explosive, is an explosive nitroamine widely used in military and industrial applications. It was developed as an explosive which was more powerful than TNT, and it saw wide use in WWII. RDX is also known as cyclonite, hexogen , and T4...
-based explosives were developed, including Compositions C, C2, and eventually C3
Composition C
The Composition C family is a family of related US-specified plastic explosives consisting primarily of RDX. All can be moulded by hand for use in demolition work and packed by hand into shaped charge devices. Variants have different proportions and plasticisers and include C-2, C-3, and C-4.The...
. Together with RDX these incorporate various plasticisers to decrease sensitivity and make the composition plastic. The origin of the obsolete term plastique dates back to the Nobel 808 explosive introduced to the U.S. by the British in 1940. The samples of explosive brought to the U.S. by the Tizard Mission
Tizard Mission
The Tizard Mission officially the British Technical and Scientific Mission was a British delegation that visited the United States during the Second World War in order to obtain the industrial resources to exploit the military potential of the research and development work completed by the UK up...
had already been packaged by the SOE ready for dropping to the French Resistance
French Resistance
The French Resistance is the name used to denote the collection of French resistance movements that fought against the Nazi German occupation of France and against the collaborationist Vichy régime during World War II...
and were therefore labelled in French, as Explosif Plastique. It is still referred to by this name in France and also by a few Americans.

C3 was effective but proved to be too brittle in cold weather. In the 1960s it was replaced by C-4, also using RDX but with polyisobutylene and di(2-ethylhexyl)sebacate as the binder and plasticizer.