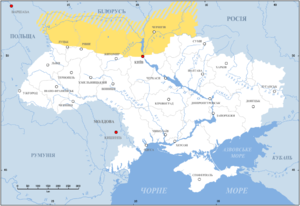 Polesia is one of the largest European swamp
Swamp
A swamp is a wetland with some flooding of large areas of land by shallow bodies of water. A swamp generally has a large number of hammocks, or dry-land protrusions, covered by aquatic vegetation, or vegetation that tolerates periodical inundation. The two main types of swamp are "true" or swamp...
y areas, located in the south-western part of the Eastern-European Lowland, mainly within Belarus
Belarus
Belarus , officially the Republic of Belarus, is a landlocked country in Eastern Europe, bordered clockwise by Russia to the northeast, Ukraine to the south, Poland to the west, and Lithuania and Latvia to the northwest. Its capital is Minsk; other major cities include Brest, Grodno , Gomel ,...
and Ukraine
Ukraine
Ukraine is a country in Eastern Europe. It has an area of 603,628 km², making it the second largest contiguous country on the European continent, after Russia...
but also partly within Poland
Poland
Poland , officially the Republic of Poland , is a country in Central Europe bordered by Germany to the west; the Czech Republic and Slovakia to the south; Ukraine, Belarus and Lithuania to the east; and the Baltic Sea and Kaliningrad Oblast, a Russian exclave, to the north...
and Russia
Russia
Russia or , officially known as both Russia and the Russian Federation , is a country in northern Eurasia. It is a federal semi-presidential republic, comprising 83 federal subjects...
. The swamp areas of Polesia are known as the Pripyat Marshes (after the Pripyat River
Pripyat River
The Pripyat River or Prypiat River is a river in Eastern Europe, approximately long. It flows east through Ukraine, Belarus, and Ukraine again, draining into the Dnieper....
) or Pinsk Marshes
Pinsk Marshes
The Pinsk Marshes or Pripyat Marshes are a vast territory of wetlands along the Pripyat River and its tributaries from Brest, Belarus to Mogilev and Kiev ....
(after the major local city of Pinsk
Pinsk
Pinsk , a town in Belarus, in the Polesia region, traversed by the river Pripyat, at the confluence of the Strumen and Pina rivers. The region was known as the Marsh of Pinsk. It is a fertile agricultural center. It lies south-west of Minsk. The population is about 130,000...
).

The New Latin
New Latin
The term New Latin, or Neo-Latin, is used to describe the Latin language used in original works created between c. 1500 and c. 1900. Among other uses, Latin during this period was employed in scholarly and scientific publications...
name Polesia is from a Slavic
Slavic languages
The Slavic languages , a group of closely related languages of the Slavic peoples and a subgroup of Indo-European languages, have speakers in most of Eastern Europe, in much of the Balkans, in parts of Central Europe, and in the northern part of Asia.-Branches:Scholars traditionally divide Slavic...
root and loosely translates as "woodland
Woodland
Ecologically, a woodland is a low-density forest forming open habitats with plenty of sunlight and limited shade. Woodlands may support an understory of shrubs and herbaceous plants including grasses. Woodland may form a transition to shrubland under drier conditions or during early stages of...
". An inhabitant of Polesia is called Poleszuk
Poleszuk
Poleszuk is the name given to the people who populated the swamps of Polesia.The Poleszuk dialect is close to the Ukrainian, Belarusian and Polish languages...
in Polish; Palyashuk in Belarusian, Polishchuk in the local Ukrainian dialect, and Poleshchuk in Russian.

Polesia is a marshy region lining the Pripyat River
Pripyat River
The Pripyat River or Prypiat River is a river in Eastern Europe, approximately long. It flows east through Ukraine, Belarus, and Ukraine again, draining into the Dnieper....
in Southern Belarus (Brest
Brest, Belarus
Brest , formerly also Brest-on-the-Bug and Brest-Litovsk , is a city in Belarus at the border with Poland opposite the city of Terespol, where the Bug River and Mukhavets rivers meet...
, Pinsk
Pinsk
Pinsk , a town in Belarus, in the Polesia region, traversed by the river Pripyat, at the confluence of the Strumen and Pina rivers. The region was known as the Marsh of Pinsk. It is a fertile agricultural center. It lies south-west of Minsk. The population is about 130,000...
, Kalinkavichy
Kalinkavichy
Kalinkavičy , or Kalinkoviči, is a town in the Homiel Province of south-eastern Belarus. Kalinkavičy is located beside the Pripyat River, opposite the town of Mazyr, and is the site of one of country's most important railway junctions...
, Homel), Northern Ukraine (in the Volyn
Volyn Oblast
Volyn Oblast is an oblast in north-western Ukraine. Its administrative center is Lutsk. Kovel is the westernmost town and the last station in Ukraine of the rail line running from Kiev to Warsaw.-History:...
, Rivne
Rivne Oblast
Rivne Oblast is an oblast of Ukraine. Its administrative center is Rivne. The area of the region is 20,100 km²; its population is 1.2 million...
, Zhytomyr
Zhytomyr Oblast
Zhytomyr Oblast is an oblast of northern Ukraine. The administrative center of the oblast is the city of Zhytomyr.-History:The oblast was created as part of the Ukrainian Soviet Socialist Republic on September 22, 1937....
, Kiev
Kiev Oblast
Kyiv Oblast, sometimes written as Kiev Oblast is an oblast in central Ukraine.The administrative center of the oblast is the city of Kyiv , also being the capital of Ukraine...
, and Chernihiv Oblast
Chernihiv Oblast
Chernihiv Oblast is an oblast of northern Ukraine. The administrative center of the oblast is the city of Chernihiv.-Geography:The total area of the province is around 31,900 km²....
s), and partly in Poland (Lublin
Lublin
Lublin is the ninth largest city in Poland. It is the capital of Lublin Voivodeship with a population of 350,392 . Lublin is also the largest Polish city east of the Vistula river...
) and Russia (Bryansk
Bryansk
Bryansk is a city and the administrative center of Bryansk Oblast, Russia, located southwest of Moscow. Population: -History:The first written mention of Bryansk was in 1146, in the Hypatian Codex, as Debryansk...
). It is a flatland within the watershed
Drainage basin
A drainage basin is an extent or an area of land where surface water from rain and melting snow or ice converges to a single point, usually the exit of the basin, where the waters join another waterbody, such as a river, lake, reservoir, estuary, wetland, sea, or ocean...
s of the Southern Bug
Southern Bug
The Southern Bug, also called Southern Buh), is a river located in Ukraine. The source of the river is in the west of Ukraine, in the Volyn-Podillia Upland, about 145 km from the Polish border, and flows southeasterly into the Bug Estuary through the southern steppes...
and Prypyat rivers. The two rivers are connected by the Dnieper-Bug Canal
Dnieper-Bug Canal
Dnieper–Bug Canal , or the Dneprovsko-Bugsky Canal is the longest inland ship canal in Belarus that connects the Mukhavets River, a tributary of the Bug River, and the Pina River, a tributary of the Pripyat River. Originally it was named Royal Canal , after the Polish king, since he was the...
, built during the reign of Stanisław August Poniatowski, the last king of the Polish-Lithuanian Commonwealth
Polish-Lithuanian Commonwealth
The Polish–Lithuanian Commonwealth was a dualistic state of Poland and Lithuania ruled by a common monarch. It was the largest and one of the most populous countries of 16th- and 17th‑century Europe with some and a multi-ethnic population of 11 million at its peak in the early 17th century...
.

Notable tributaries of the Pripyat are the Horyn (Goryn
Goryn
Goryń may refer to the following places:*Goryń, Kuyavian-Pomeranian Voivodeship *Goryń, Łódź Voivodeship *Goryń, Masovian Voivodeship *Goryń, Warmian-Masurian Voivodeship...
), Stokhod (Stokhod, Stokhid), Styr, Ptsich, Yaselda rivers. The largest towns in the Pripyat basin are Pinsk
Pinsk
Pinsk , a town in Belarus, in the Polesia region, traversed by the river Pripyat, at the confluence of the Strumen and Pina rivers. The region was known as the Marsh of Pinsk. It is a fertile agricultural center. It lies south-west of Minsk. The population is about 130,000...
, Stolin
Stolin
Stolin is a town in the Brest Voblast of Belarus. Nowadays, Stolin is the center of the largest district in Brest voblast. The population of Stolin is 12,500 people . The Belarusian-Ukrainian border is about away, so Stolin is now a border city that hosts many Ukrainians on the market days...
, Davyd-Haradok
Davyd-Haradok
Davyd-Haradok is a city in the southwestern Belarusian voblast of Brest. It has 7,681 inhabitants .-External links:* *...
. Huge marshes were reclaimed from the 1960s to the 1980s for farm
Farm
A farm is an area of land, or, for aquaculture, lake, river or sea, including various structures, devoted primarily to the practice of producing and managing food , fibres and, increasingly, fuel. It is the basic production facility in food production. Farms may be owned and operated by a single...
land. The reclamation is believed to have harmed the environment along the course of the Pripyat.

Polesia has rarely been a separate administrative unit. However, there was a Polesie Voivodeship
Polesie Voivodeship
Polesie Voivodeship was an administrative unit of interwar Poland . It ceased to exist in September 1939, following German and Soviet aggression on Poland .-Population:...
during the Second Polish Republic
Second Polish Republic
The Second Polish Republic, Second Commonwealth of Poland or interwar Poland refers to Poland between the two world wars; a period in Polish history in which Poland was restored as an independent state. Officially known as the Republic of Poland or the Commonwealth of Poland , the Polish state was...
, as well as a Polesia Voblast
Polesia Voblast
Polesia Voblast was an administrative division in Soviet Belarus. It was created on January 15, 1938. It included territories of eastern Polesia and consisted of 15 raions. Center of Polesia Voblast was town of Mozyr....
in Byelorussian SSR
Byelorussian SSR
The Byelorussian Soviet Socialist Republic was one of fifteen constituent republics of the Soviet Union. It was one of the four original founding members of the Soviet Union in 1922, together with the Ukrainian SSR, the Transcaucasian SFSR and the Russian Soviet Federative Socialist Republic...
.

The Polish part of the region includes the Polesie National Park
Polesie National Park
Polesie National Park is a National Park in Lublin Voivodeship, eastern Poland, in the Polish part of the historical region of Polesie. Created in 1990 over an area of 48.13 square kilometres, it covers a number of former peat-bog preserves: Durne Bagno, Jezioro Moszne, Jezioro Długie, Torfowisko...
(Poleski Park Narodowy), established 1990, which covers an area of 97.6 square kilometres (37.7 sq mi). This and a wider area adjoining it (up to the Ukrainian border) make up the UNESCO
UNESCO
The United Nations Educational, Scientific and Cultural Organization is a specialized agency of the United Nations...
-designated West Polesie Biosphere Reserve
Biosphere reserve
The Man and the Biosphere Programme of UNESCO was established in 1971 to promote interdisciplinary approaches to management, research and education in ecosystem conservation and sustainable use of natural resources.-Development:...
, which borders a similar reserve (the Shatskiy Biosphere Reserve) on the Ukrainian side.

The wooden architecture structures in the region were added to the UNESCO
UNESCO
The United Nations Educational, Scientific and Cultural Organization is a specialized agency of the United Nations...
World Heritage Tentative List on January 30, 2004 in the Cultural category.
The source of this article is wikipedia, the free encyclopedia.  The text of this article is licensed under the GFDL.