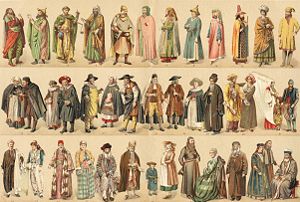 Jenny Mendelsohn, of University of Toronto
University of Toronto
The University of Toronto is a public research university in Toronto, Ontario, Canada, situated on the grounds that surround Queen's Park. It was founded by royal charter in 1827 as King's College, the first institution of higher learning in Upper Canada...
Libraries, in an online guide to major sources of information about Jews and Judaism, writes of this work, "Although published in the early 1900s, this was a work highly regarded for its scholarship. Much of the material is still of value to researchers in Jewish History."
In 2003 Reform
Reform Judaism
Reform Judaism refers to various beliefs, practices and organizations associated with the Reform Jewish movement in North America, the United Kingdom and elsewhere. In general, it maintains that Judaism and Jewish traditions should be modernized and should be compatible with participation in the...
rabbi
Rabbi
In Judaism, a rabbi is a teacher of Torah. This title derives from the Hebrew word רבי , meaning "My Master" , which is the way a student would address a master of Torah...
Joshua L. Segal described it as "a remarkable piece of Jewish scholarship" and added, "For events prior to 1900, it is considered to offer a level of scholarship superior to either of the more recent Jewish Encyclopedias written in English."

The scholarly style of the Jewish Encyclopedia is very much in the mode of Wissenschaft des Judentums
Wissenschaft des Judentums
Wissenschaft des Judentums , refers to a nineteenth-century movement premised on the critical investigation of Jewish literature and culture, including rabbinic literature, using scientific methods to analyze the origins of Jewish traditions.-The Verein für Cultur und Wissenschaft der Juden:The ...
studies, an approach to Jewish scholarship and religion that flourished in 19th-century Germany; indeed, the Encyclopedia may be regarded as the culmination of this movement. In the 20th century, the movement's members dispersed to Jewish Studies
Jewish studies
Jewish studies is an academic discipline centered on the study of Jews and Judaism. Jewish studies is interdisciplinary and combines aspects of history , religious studies, archeology, sociology, languages , political science, area studies, women's studies, and ethnic studies...
departments in the United States
United States
The United States of America is a federal constitutional republic comprising fifty states and a federal district...
and Israel
Israel
The State of Israel is a parliamentary republic located in the Middle East, along the eastern shore of the Mediterranean Sea...
. The scholarly authorities cited in the Encyclopedia—besides the classical and medieval exegetes
Exegesis
Exegesis is a critical explanation or interpretation of a text, especially a religious text. Traditionally the term was used primarily for exegesis of the Bible; however, in contemporary usage it has broadened to mean a critical explanation of any text, and the term "Biblical exegesis" is used...
—are almost uniformly Wissenschaft figures, such as Leopold Zunz
Leopold Zunz
Leopold Zunz was a German Reform rabbi and writer, the founder of what has been termed "Jewish Studies" or "Judaic Studies" , the critical investigation of Jewish literature, hymnology and ritual...
, Moritz Steinschneider
Moritz Steinschneider
Moritz Steinschneider was a Bohemian bibliographer and Orientalist. He received his early instruction in Hebrew from his father, Jacob Steinschneider , who was not only an expert Talmudist, but was also well versed in secular science...
, Solomon Schechter
Solomon Schechter
Solomon Schechter was a Moldavian-born Romanian and English rabbi, academic scholar, and educator, most famous for his roles as founder and President of the United Synagogue of America, President of the Jewish Theological Seminary of America, and architect of the American Conservative Jewish...
, Wilhelm Bacher
Wilhelm Bacher
Wilhelm Bacher was a Jewish Hungarian scholar, rabbi, Orientalist and linguist, born in Liptó-Szent-Miklós, Hungary to the Hebrew writer Simon Bacher. Wilhelm was himself an incredibly prolific writer, authoring or co-authoring approximately 750 works in an unfortunately short life...
, J.L. Rapoport
Samuel Judah Löb Rapoport
Solomon Judah Löb Rapoport , was a Galician rabbi and Jewish scholar. He was born in Lemberg, Kingdom of Galicia and Lodomeria, Austria. He married the daughter of the famed Ketoz hachosen http://en.wikipedia.org/wiki/Aryeh_Leib_Heller, and was instrumental in publishing the work Avnie Miluim of...
, David Zvi Hoffman
David Zvi Hoffman
David Zvi Hoffmann , was an Orthodox Rabbi and Torah Scholar. Born in Verbó in 1843, he attended various Yeshivas in his native town before he entered the college at Pressburg, from which he graduated in 1865...
, Heinrich Graetz
Heinrich Graetz
Heinrich Graetz was amongst the first historians to write a comprehensive history of the Jewish people from a Jewish perspective....
, etc. This particular scholarly style can be seen in the Jewish Encyclopedia's almost obsessive attention to manuscript discovery, manuscript editing and publication, manuscript comparison, manuscript dating, and so on; these endeavors were among the foremost interests of Wissenschaft scholarship.

The Jewish Encyclopedia is an English language
English language
English is a West Germanic language that arose in the Anglo-Saxon kingdoms of England and spread into what was to become south-east Scotland under the influence of the Anglian medieval kingdom of Northumbria...
work, but the vast majority of the encyclopedia's contemporary sources are German language
German language
German is a West Germanic language, related to and classified alongside English and Dutch. With an estimated 90 – 98 million native speakers, German is one of the world's major languages and is the most widely-spoken first language in the European Union....
sources, since this was the mother tongue of the Wissenschaft scholars and the lingua franca of scholarship in general in that period. Of the works cited which are not German—usually the more classical works—the large part are either Hebrew or Arabic
Arabic language
Arabic is a name applied to the descendants of the Classical Arabic language of the 6th century AD, used most prominently in the Quran, the Islamic Holy Book...
. The only heavily cited English-language source of contemporary scholarship is Solomon Schechter's publications in the Jewish Quarterly Review
Jewish Quarterly Review
The Jewish Quarterly Review is an peer-reviewed academic journal which focuses on Jewish studies. It is published quarterly for the Herbert D. Katz Center for Advanced Judaic Studies at the University of Pennsylvania by the University of Pennsylvania Press. The current editors are Elliott Horowitz...
. The significance of the work's publication in English rather than German or Hebrew is captured by Harry Wolfson writing in 1926 :
The editors and authors of the Jewish Encyclopedia proved prescient in their choice of language, since within that same span of 25 years, English rose to become the dominant language of academic Jewish scholarship and among Jews worldwide. Wolfson continues that "if a Jewish Encyclopedia in a modern language were planned for the first time [i.e., in 1926], the choice would undoubtedly have fallen upon English."

The unedited text of the original can be found at the Jewish Encyclopedia website. The site offers both JPEG
JPEG
In computing, JPEG . The degree of compression can be adjusted, allowing a selectable tradeoff between storage size and image quality. JPEG typically achieves 10:1 compression with little perceptible loss in image quality....
facsimiles of the original articles and Unicode
Unicode
Unicode is a computing industry standard for the consistent encoding, representation and handling of text expressed in most of the world's writing systems...
transcriptions of all texts.

The search capability is somewhat handicapped by the fact that the search mechanism fails to take into account the decision to maintain all diacritical marks in the transliterated
Transliteration
Transliteration is a subset of the science of hermeneutics. It is a form of translation, and is the practice of converting a text from one script into another...
Hebrew
Hebrew language
Hebrew is a Semitic language of the Afroasiatic language family. Culturally, is it considered by Jews and other religious groups as the language of the Jewish people, though other Jewish languages had originated among diaspora Jews, and the Hebrew language is also used by non-Jewish groups, such...
and Aramaic
Aramaic language
Aramaic is a group of languages belonging to the Afroasiatic language phylum. The name of the language is based on the name of Aram, an ancient region in central Syria. Within this family, Aramaic belongs to the Semitic family, and more specifically, is a part of the Northwest Semitic subfamily,...
from the 1901–1906 text, which used a large number of diacriticals not in common use today. Thus, for example, to successfully search for "Halizah
Halizah
Under the Biblical system of levirate marriage known as Yibbum, Halizah is the ceremony by which a widow and her husband's brother could avoid the duty to marry after the husband's death....
" (the ceremony by which the widow of a brother who has died childless released her brother-in-law from the obligation of marrying her), one would have to know that they have transliterated this as "Ḥaliẓah". The alphabetic index ignores diacriticals so it can be more useful when searching for an article whose title is known.

Another problem is that sometimes an article's hypertext link to another article will link to the wrong article. For example, in the article for Moritz CANTOR, the link to Georg CANTOR links instead to the synagogue official CANTOR. Even when such errors are pointed out, they are not corrected.

The scholarly apparatus of citation is thorough, but can be a bit daunting to contemporary users. Books that might have been widely known among scholars of Judaism at the time the encyclopedia was written (but which are quite obscure to a lay reader today) are referred to by author and title, but with no publication information and often without indication of the language in which they were written. A list of abbreviations used in the encyclopedia is provided (See Listing of Abbreviations).

The Jewish Encyclopedia was heavily used as a source by the 16-volume Jewish Encyclopedia in Russian
Russian language
Russian is a Slavic language used primarily in Russia, Belarus, Uzbekistan, Kazakhstan, Tajikistan and Kyrgyzstan. It is an unofficial but widely spoken language in Ukraine, Moldova, Latvia, Turkmenistan and Estonia and, to a lesser extent, the other countries that were once constituent republics...
, published by Brockhaus and Efron in Saint Petersburg
Saint Petersburg
Saint Petersburg is a city and a federal subject of Russia located on the Neva River at the head of the Gulf of Finland on the Baltic Sea...
between 1906 and 1913.