Encyclopedia
Pierre Le Gloan French
France
The French Republic , The French Republic , The French Republic , (commonly known as France , is a unitary semi-presidential republic in Western Europe with several overseas territories and islands located on other continents and in the Indian, Pacific, and Atlantic oceans. Metropolitan France...
pilot (flying ace
Flying ace
A flying ace or fighter ace is a military aviator credited with shooting down several enemy aircraft during aerial combat. The actual number of aerial victories required to officially qualify as an "ace" has varied, but is usually considered to be five or more...
) of World War II
World War II
World War II, or the Second World War , was a global conflict lasting from 1939 to 1945, involving most of the world's nations—including all of the great powers—eventually forming two opposing military alliances: the Allies and the Axis...
.

He was born in Brittany
Brittany
Brittany is a cultural and administrative region in the north-west of France. Previously a kingdom and then a duchy, Brittany was united to the Kingdom of France in 1532 as a province. Brittany has also been referred to as Less, Lesser or Little Britain...
, France. At the age of eighteen he joined the French Air Force. At the outbreak of the war he served in the GC III/6 fighter squadron, flying the Morane-Saulnier MS.406. Along with his wingman, he shot down his first German Do 17P
Dornier Do 17
The Dornier Do 17, sometimes referred to as the Fliegender Bleistift , was a World War II German light bomber produced by Claudius Dornier's company, Dornier Flugzeugwerke...
reconnaissance bomber on November 23, 1939. At the beginning of the Battle of France
Battle of France
In the Second World War, the Battle of France was the German invasion of France and the Low Countries, beginning on 10 May 1940, which ended the Phoney War. The battle consisted of two main operations. In the first, Fall Gelb , German armoured units pushed through the Ardennes, to cut off and...
in 1940 he shot down 3 German bombers. 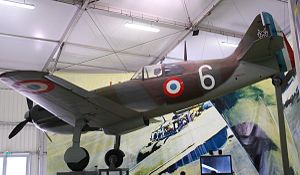 On June 1, 1940 his squadron was moved towards southern France, to Le Luc airfield and re-armed with the newest Dewoitine D.520
Dewoitine D.520
The Dewoitine D.520 was a French fighter aircraft that entered service in early 1940, shortly after the opening of World War II. Unlike the Morane-Saulnier M.S.406, which was at that time the Armée de l'Airs most numerous fighter, the Dewoitine D.520 came close to being a match for the latest...
fighters. After Italy
Italy
Italy , officially the Italian Republic languages]] under the European Charter for Regional or Minority Languages. In each of these, Italy's official name is as follows:;;;;;;;;), is a unitary parliamentary republic in South-Central Europe. To the north it borders France, Switzerland, Austria and...
declared war on France and the Italian air force started bombing raids, Le Gloan shot down two Fiat BR.20
Fiat BR.20
The Fiat BR.20 Cicogna was a low-wing twin-engine medium bomber produced from mid-1930s until the end of World War II by the Turin firm. When it entered service in 1936 it was the first all-metal Italian bomber and it was regarded as one of the most modern medium bomber of the world...
bombers on June 13, flying in pair. On June 15 Le Gloan, along with another pilot, attacked a group of twelve Italian Fiat CR.42
Fiat CR.42
The Fiat CR.42 Falco was a single-seat sesquiplane fighter which served primarily in Italy's Regia Aeronautica before and during World War II. The aircraft was produced by the Turin firm, and entered service, in smaller numbers, with the air forces of Belgium, Sweden and Hungary...
fighters, and shot down three of them, while Cpt. Assolent shot down another. While returning to the airfield, Le Gloan shot down another CR.42 and another BR.20 bomber. For this outstanding achievement of destroying 5 aircraft in one flight, he was promoted to 2nd Lieutenant.

Due to the military situation of France, on June 20, GC III/6 squadron was withdrawn to Algiers
Algiers
' is the capital and largest city of Algeria. According to the 1998 census, the population of the city proper was 1,519,570 and that of the urban agglomeration was 2,135,630. In 2009, the population was about 3,500,000...
in the French colony of Algeria
Algeria
Algeria , officially the People's Democratic Republic of Algeria , also formally referred to as the Democratic and Popular Republic of Algeria, is a country in the Maghreb region of Northwest Africa with Algiers as its capital.In terms of land area, it is the largest country in Africa and the Arab...
. After the armistice between France and Germany
Armistice with France (Second Compiègne)
The Second Armistice at Compiègne was signed at 18:50 on 22 June 1940 near Compiègne, in the department of Oise, between Nazi Germany and France...
, and the subsequent British attacks on the French navy, French forces in North Africa, including Le Gloan's unit, became subordinated to the Vichy government
Vichy France
Vichy France, Vichy Regime, or Vichy Government, are common terms used to describe the government of France that collaborated with the Axis powers from July 1940 to August 1944. This government succeeded the Third Republic and preceded the Provisional Government of the French Republic...
. In May 1941 GC III/6 was moved to the French colony of Syria
Syria
Syria , officially the Syrian Arab Republic , is a country in Western Asia, bordering Lebanon and the Mediterranean Sea to the West, Turkey to the north, Iraq to the east, Jordan to the south, and Israel to the southwest....
. In June, Allied forces, including some Free French units, attacked Syria and Lebanon
Syria-Lebanon campaign
The Syria–Lebanon campaign, also known as Operation Exporter, was the Allied invasion of Vichy French-controlled Syria and Lebanon, in June–July 1941, during World War II. Time Magazine referred to the fighting as a "mixed show" while it was taking place and the campaign remains little known, even...
. In subsequent combat, on June 8, 1941, Le Gloan shot down his first British fighter (Hawker Hurricane
Hawker Hurricane
The Hawker Hurricane is a British single-seat fighter aircraft that was designed and predominantly built by Hawker Aircraft Ltd for the Royal Air Force...
). By July 5, he had shot down 6 Hurricanes and 1 Gloster Gladiator
Gloster Gladiator
The Gloster Gladiator was a British-built biplane fighter. It was used by the Royal Air Force and the Royal Navy and was exported to a number of other air forces during the late 1930s. It was the RAF's last biplane fighter aircraft and was rendered obsolete by newer monoplane designs even as it...
. Later the weakened GC III/6 was withdrawn back to Algiers.

During the allied invasion of North Africa in November 1942, (Operation Torch
Operation Torch
Operation Torch was the British-American invasion of French North Africa in World War II during the North African Campaign, started on 8 November 1942....
), French fighter squadrons based in Algiers, unlike those in Oran or Casablanca, did not oppose the Allied landings. Soon all the French forces in North Africa had sided with the Allies. In May 1943, Le Gloan's unit, then renamed GC 3/6 Roussillon, was re-armed with new P-39 Airacobra fighters from the United States. In August, Le Gloan took the command of the 3rd escadrille (flight) of the squadron. The unit's primary task at the time were offshore patrols.

On September 11, 1943, Pierre Le Gloan flew on patrol with another pilot. Over the sea, smoke started to come out of Le Gloan's engine. He returned towards the shore, but the engine stopped. He tried to make a belly landing on the shore, but, probably forgetting that his Airacobra still had an underbelly fuel tank attached (which were not used on earlier French fighters), the fuel in his plane exploded while he was trying to land, killing him instantly.

During his complicated combat career, Pierre Le Gloan shot down 18 aircraft (4 German, 7 Italian and 7 British), which gave him the 4th position among the French flying ace
Flying ace
A flying ace or fighter ace is a military aviator credited with shooting down several enemy aircraft during aerial combat. The actual number of aerial victories required to officially qualify as an "ace" has varied, but is usually considered to be five or more...
s of the war.
The source of this article is wikipedia, the free encyclopedia.  The text of this article is licensed under the GFDL.