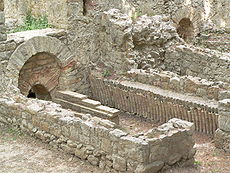 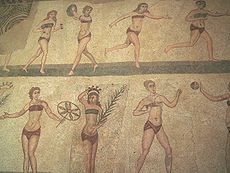 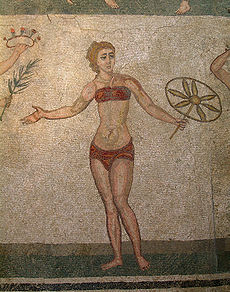 Villa Romana del Casale (Sicilian
Sicilian language
Sicilian is a Romance language. Its dialects make up the Extreme-Southern Italian language group, which are spoken on the island of Sicily and its satellite islands; in southern and central Calabria ; in the southern parts of Apulia, the Salento ; and Campania, on the Italian mainland, where it is...
: Villa Rumana dû Casali) is a Roman villa
Roman villa
A Roman villa is a villa that was built or lived in during the Roman republic and the Roman Empire. A villa was originally a Roman country house built for the upper class...
built in the first quarter of the 4th century and located about 5 km outside the town of Piazza Armerina
Piazza Armerina
Piazza Armerina is an Italian comune in the province of Enna of the autonomous island region of Sicily.-History:...
, Sicily
Sicily
Sicily is a region of Italy, and is the largest island in the Mediterranean Sea. Along with the surrounding minor islands, it constitutes an autonomous region of Italy, the Regione Autonoma Siciliana Sicily has a rich and unique culture, especially with regard to the arts, music, literature,...
, southern Italy
Italy
Italy , officially the Italian Republic languages]] under the European Charter for Regional or Minority Languages. In each of these, Italy's official name is as follows:;;;;;;;;), is a unitary parliamentary republic in South-Central Europe. To the north it borders France, Switzerland, Austria and...
. Containing the richest, largest and most complex collection of Roman
Roman Empire
The Roman Empire was the post-Republican period of the ancient Roman civilization, characterised by an autocratic form of government and large territorial holdings in Europe and around the Mediterranean....
mosaic
Mosaic
Mosaic is the art of creating images with an assemblage of small pieces of colored glass, stone, or other materials. It may be a technique of decorative art, an aspect of interior decoration, or of cultural and spiritual significance as in a cathedral...
s in the world, it is one of 44 UNESCO
UNESCO
The United Nations Educational, Scientific and Cultural Organization is a specialized agency of the United Nations...
World Heritage Site
World Heritage Site
A UNESCO World Heritage Site is a place that is listed by the UNESCO as of special cultural or physical significance...
s in Italy..

The Villa
Villa
A villa was originally an ancient Roman upper-class country house. Since its origins in the Roman villa, the idea and function of a villa have evolved considerably. After the fall of the Roman Republic, villas became small farming compounds, which were increasingly fortified in Late Antiquity,...
was constructed (on the remains of an older villa) in the first quarter of the 4th century AD, probably as the center of a huge latifundium (agricultural estate) covering the surrounding area. How long the villa kept this role is not known, maybe for less than 150 years. The complex remained inhabited and a village grew around it, named Platia (derived from the word palatium (palace). The villa was damaged and perhaps destroyed during the domination of the Vandals and the Visigoth
Visigoth
The Visigoths were one of two main branches of the Goths, the Ostrogoths being the other. These tribes were among the Germans who spread through the late Roman Empire during the Migration Period...
s. The outbuildings remained in use, at least in part, during the Byzantine
Byzantium
Byzantium was an ancient Greek city, founded by Greek colonists from Megara in 667 BC and named after their king Byzas . The name Byzantium is a Latinization of the original name Byzantion...
and Arab
Arab
Arab people, also known as Arabs , are a panethnicity primarily living in the Arab world, which is located in Western Asia and North Africa. They are identified as such on one or more of genealogical, linguistic, or cultural grounds, with tribal affiliations, and intra-tribal relationships playing...
periods. The site was abandoned in the 12th century AD when a landslide
Landslide
A landslide or landslip is a geological phenomenon which includes a wide range of ground movement, such as rockfalls, deep failure of slopes and shallow debris flows, which can occur in offshore, coastal and onshore environments...
covered the villa. Survivors moved to the current location of Piazza Armerina
Piazza Armerina
Piazza Armerina is an Italian comune in the province of Enna of the autonomous island region of Sicily.-History:...
.

The villa was almost entirely forgotten, although some of the tallest parts of the remains were always above ground. The area was cultivated for crops. Early in the 19th century, pieces of mosaic
Mosaic
Mosaic is the art of creating images with an assemblage of small pieces of colored glass, stone, or other materials. It may be a technique of decorative art, an aspect of interior decoration, or of cultural and spiritual significance as in a cathedral...
s and some columns were found. The first official archaeological
Archaeology
Archaeology, or archeology , is the study of human society, primarily through the recovery and analysis of the material culture and environmental data that they have left behind, which includes artifacts, architecture, biofacts and cultural landscapes...
excavations were carried out later in that century.

The first professional excavations were made by Paolo Orsi
Paolo Orsi
Paolo Orsi was an Italian archaeologist and classicist.-Life:Orsi was born in Rovereto, then part of the Austro-Hungarian Empire and now in the province of Trento in Italy. After studying at a gymnasium in Rovereto, Orsi moved to Vienna to study ancient history and archaeology...
in 1929, followed by the work of Giuseppe Cultrera in 1935-39. The last major excavations took place in the period 1950-60. They were led by Gino Vinicio Gentili
Gino Vinicio Gentili
Gino Vinicio Gentili was an Italian archaeologist.-Biography:He earned his degree in Fine Arts and Letters at the University of Rome La Sapienza and graduated in Archaeology at the Italian School of Archaeology in Rome...
, after which a cover was built over the mosaics. In the 1970s Andrea Carandini
Andrea Carandini
Count Andrea Carandini is an Italian archaeologist specialising in ancient Rome. Among his many excavations is the villa of Settefinestre....
carried out a few localized excavations at the site.

In late antiquity the Romans partitioned most of the Sicilian hinterland into huge agricultural estates called "latifundia" (sing. "latifundium"). The size of the villa and the amount and quality of its artwork indicate that it was the center of such a latifundium. The owner was probably a member of senatorial class if not of the imperial family itself, i.e., the absolute upper class of the Roman Empire
Roman Empire
The Roman Empire was the post-Republican period of the ancient Roman civilization, characterised by an autocratic form of government and large territorial holdings in Europe and around the Mediterranean....
.

The villa appeared to have served several purposes. It contained some rooms that were clearly residential, others that certainly had official purposes, and a number of rooms of as yet unknown intended use. They were definitely not built for commercial or production uses. The villa would probably have been the permanent or semi-permanent residence of the owner; it would have been where the owner, in his role as patron, received his local clients; and it would have functioned as the administrative center of the latifundium.

Only the manorial portions of the complex have yet been excavated. The ancillary structures: housing for slaves, workshops, stables, etc., have not been located.


The latifundium and the villa

The overall plan of the villa was dictated by several factors: older constructions on the site, the slight slope on which it was built, and the path of the sun and prevailing winds. The higher ground to the east is occupied by the Great Basilica
Basilica
The Latin word basilica , was originally used to describe a Roman public building, usually located in the forum of a Roman town. Public basilicas began to appear in Hellenistic cities in the 2nd century BC.The term was also applied to buildings used for religious purposes...
, the private apartments, and the Corridor of the Great Hunt; the middle ground by the Peristyle
Peristyle
In Hellenistic Greek and Roman architecture a peristyle is a columned porch or open colonnade in a building surrounding a court that may contain an internal garden. Tetrastoon is another name for this feature...
, guest rooms, the entrance area, the Elliptical Peristyle, and the triclinium; while the lower ground to the west is dedicated to the thermal bath
Thermal bath
A thermal bath is a warm body of water. It is often referred to as a spa, which is traditionally used to mean a place where the water is believed to have special health-giving properties, though note that many spas offer cold water or mineral water treatments.A thermal bath may be part of a...
s.

The whole complex is somewhat unusual, as it is organized along three major axes; the primary axis is the (slightly bent) line that passes from the atrium, tablinum
Tablinum
In Roman architecture, a tablinum was a room generally situated on one side of the atrium and opposite to the entrance; it opened in the rear on to the peristyle, with either a large window or only an anteroom or curtain...
, peristyle and the great basilica (coinciding with the path visitors would follow). The thermal baths and the elliptical peristyle with the triclinium
Triclinium
A triclinium is a formal dining room in a Roman building. The word is adopted from the Greek τρικλίνιον, triklinion, from τρι-, tri-, "three", and κλίνη, klinē, a sort of "couch" or rather chaise longue...
are centered on separate axes. In spite of the different orientations of the various parts of the villa, they all form a single structure, built simultaneously. There is no indication that the villa was constructed in several stages.

Little is known about the earlier villa, but it appears to have been just a large country residence. It was probably built around the beginning of the second century.

In 1959-60, Gentili excavated a mosaic on the floor of the room dubbed the "Chamber of the Ten Maidens" (Sala delle Dieci Ragazze in Italian). Informally called "the bikini girls", the maidens appear in a mosaic artwork which scholars named Coronation of the Winner. The young women perform sports including weight-lifting, discus
Discus
Discus, "disk" in Latin, may refer to:* Discus , a progressive rock band from Indonesia* Discus , a fictional character from the Marvel Comics Universe and enemy of Luke Cage* Discus , a freshwater fish popular with aquarium keepers...
throwing, running and ball-games. A woman in a toga
Toga
The toga, a distinctive garment of Ancient Rome, was a cloth of perhaps 20 ft in length which was wrapped around the body and was generally worn over a tunic. The toga was made of wool, and the tunic under it often was made of linen. After the 2nd century BC, the toga was a garment worn...
is depicted with a crown in her hand; one of the maidens holds a palm
Arecaceae
Arecaceae or Palmae , are a family of flowering plants, the only family in the monocot order Arecales. There are roughly 202 currently known genera with around 2600 species, most of which are restricted to tropical, subtropical, and warm temperate climates...
frond..

Another well-preserved mosaic shows a hunt, with hunters using dogs and capturing a variety of game.

Lots of pictures from the villa