The physical characteristics of shark
Shark
Sharks are a type of fish with a full cartilaginous skeleton and a highly streamlined body. The earliest known sharks date from more than 420 million years ago....
s are different from those of bony and many other kinds of fish, but the large number of species and the diversity of shark habitats means that there are many variations on the "typical" shark body.

Like other fish, sharks extract oxygen from seawater as it passes over their gills. Some sharks have a modified slit called a spiracle
Spiracle
Spiracles are openings on the surface of some animals that usually lead to respiratory systems.-Vertebrates:The spiracle is a small hole behind each eye that opens to the mouth in some fishes. In the primitive jawless fish the first gill opening immediately behind the mouth is essentially similar...
located just behind the eye
Eye
Eyes are organs that detect light and convert it into electro-chemical impulses in neurons. The simplest photoreceptors in conscious vision connect light to movement...
, which is used in respiration. Due to their size and the nature of their metabolism
Metabolism
Metabolism is the set of chemical reactions that happen in the cells of living organisms to sustain life. These processes allow organisms to grow and reproduce, maintain their structures, and respond to their environments. Metabolism is usually divided into two categories...
, sharks have a higher demand for oxygen than most fish and they can not rely on ambient water currents to provide an adequate supply of oxygenated water. If a shark were to stop swimming, the water circulation would drop below the level necessary for respiration and the animal could suffocate. The process of ensuring an adequate flow of the gills by forward movement is known as ram ventilation. Some sharks, such as the blacktip reef shark
Blacktip reef shark
The blacktip reef shark is a species of requiem shark, family Carcharhinidae, easily identified by the prominent black tips on its fins...
, Carcharhinus melanopterus, and nurse shark
Nurse shark
The nurse shark, Ginglymostoma cirratum, sometimes referred to as the Nur Shark is a shark in the nurse sharks family, the only member of its genus Ginglymostoma...
, Ginglymostoma cirratum, can pump water over their gills as they rest. There are also recorded instances, as in certain caves along the Yucatan
Yucatán
Yucatán officially Estado Libre y Soberano de Yucatán is one of the 31 states which, with the Federal District, comprise the 32 Federal Entities of Mexico. It is divided in 106 municipalities and its capital city is Mérida....
coast, where sharks rest on the cave floors and allow the fresh water outflow to pass over them. The outflow is strong enough to still allow for respiration; it is believed that the reason for this behaviour is that the fresh water helps remove parasites. 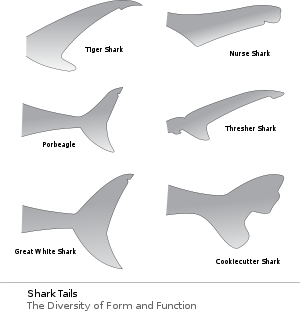 The tails (caudal fins) of sharks vary considerably between species and are adapted to the lifestyle of the shark. The tail provides thrust and so speed and acceleration is dependent on tail shape. All sharks have a dorsal fin

Some typical shark tail shapes are discussed below:

Tiger shark - The tiger shark
Tiger shark
The tiger sharks, Galeocerdo cuvier, is a species of requiem shark and the only member of the genus Galeocerdo. Commonly known as sea tigers, tiger sharks are relatively large macropredators, capable of attaining a length of over . It is found in many tropical and temperate waters, and is...
s tail is pronouncedly epicercal (the upper lobe is longer and heavier than the lower lobe). Movement is controlled by swinging the body from side to side. The large upper lobe delivers the maximum amount of power for slow cruising or sudden bursts of speed. The tiger shark has a varied diet, and because of this it must be able to twist and turn in the water easily when hunting turtle
Turtle
Turtles are reptiles of the order Testudines , characterised by a special bony or cartilaginous shell developed from their ribs that acts as a shield...
s, fish
Fish
Fish are a paraphyletic group of organisms that consist of all gill-bearing aquatic vertebrate animals that lack limbs with digits. Included in this definition are the living hagfish, lampreys, and cartilaginous and bony fish, as well as various extinct related groups...
, stingray
Stingray
The stingrays are a group of rays, which are cartilaginous fishes related to sharks. They are classified in the suborder Myliobatoidei of the order Myliobatiformes, and consist of eight families: Hexatrygonidae , Plesiobatidae , Urolophidae , Urotrygonidae , Dasyatidae , Potamotrygonidae The...
s, and other sharks. Sand tigers are fairly large, stocky sharks with blunt snouts and large, unserrated teeth. Their skin ranges from a sandy-brown to grey-brown colour and they have dark spots, which fade as they mature.

Also Known as: Carcharias taurus
These sharks use their sharp teeth to catch small fishes, squid, crabs and lobster.

Habitat: Sand tiger sharks frequent habitats from 6 to 600 feet deep, including
the surf zone, coral and rocky reefs, and the ocean floor.
The surface layer of the ocean is known as the Epipelagic Zone or The Sunlight Zone and extends from the surface to 200 meters (656 feet). It is also known as the sunlight zone because this is where most of the visible light exists. With the light come heat. This heat is responsible for the wide range of temperatures that occur in this zone.
Sand tigers inhabit the Atlantic, Pacific and Indian Ocean and are sometimes encountered in the Mediterranean

Predators: Young sand tiger sharks may be preyed on by larger sharks, but
adults have virtually no predators other than humans.

Relatives: There are more than 400 species of sharks, and only a few are dangerous
to humans. Sharks are closely related to skates and rays.

Family life: Baby sand tiger sharks develop within eggs that are carried and hatch in their mother’s uterus. The largest hatchling in each uterus eats the unhatched eggs and smaller embryos. As a result, each female gives birth to just two offspring, one for each uterus. The pups are born after 8 to 9 months, and then take about 4 to 6 years to reach breeding age. Shark populations recover slowly from overfishing, partly due to this slow growth rate.
Nurse shark - The nurse shark is common in shallow waters around the tropical coasts of America and Africa, and is nocturnal. Its prey consists mainly of invertebrates such as crabs, lobsters, sea urchins and octopuses. This causes the sharks to spend most of their time on the seabed. As a result high acceleration is not necessary and the lower lobe has almost completely disappeared. They swim with an eel-like motion, using broad sweeps of their elongated tails to cruise slowly.

Porbeagle - The porbeagle
Porbeagle
The porbeagle is a species of mackerel shark in the family Lamnidae, distributed widely in the cold and temperate marine waters of the North Atlantic and Southern Hemisphere. In the North Pacific, its ecological equivalent is the closely related salmon shark...
is a heavily built pelagic shark, closely related to the mako
Mako
-Biology:*Isurus, the mako shark genus, consisting of two living and several fossil species:**Shortfin mako shark, Isurus oxyrinchus, the more common mako**Longfin mako shark, Isurus paucus, the rarer mako-Places:*Mako, Ethiopia, a town in Ethiopia...
and great white
Great white shark
The great white shark, scientific name Carcharodon carcharias, also known as the great white, white pointer, white shark, or white death, is a large lamniform shark found in coastal surface waters in all major oceans. It is known for its size, with the largest individuals known to have approached...
, which hunts on schooling fishes such as mackerel
Mackerel
Mackerel is a common name applied to a number of different species of fish, mostly, but not exclusively, from the family Scombridae. They may be found in all tropical and temperate seas. Most live offshore in the oceanic environment but a few, like the Spanish mackerel , enter bays and can be...
and herring
Herring
Herring is an oily fish of the genus Clupea, found in the shallow, temperate waters of the North Pacific and the North Atlantic oceans, including the Baltic Sea. Three species of Clupea are recognized. The main taxa, the Atlantic herring and the Pacific herring may each be divided into subspecies...
. The tail is used for propulsion rather than having to swing their body from side to side. The large lower lobe provides greater speed to help them keep pace with their fast swimming prey, and their lateral keels may reduce drag making for more efficient hunting.

Thresher shark - The thresher
Thresher shark
Thresher sharks are large lamniform sharks of the family Alopiidae. Found in all temperate and tropical oceans of the world, the family contains three species all within the genus Alopias.-Taxonomy:...
is found in tropical and temperate waters around the world and feed on fish and squid, which they are believed to herd, then stun with the powerful and elongated upper lobe. The three species of thresher are active and strong-swimming sharks - the evolution of the highly elongated tail (which may be half of their total length) has not been at the expense of speed or agility.

Great white shark - The great white
Great white shark
The great white shark, scientific name Carcharodon carcharias, also known as the great white, white pointer, white shark, or white death, is a large lamniform shark found in coastal surface waters in all major oceans. It is known for its size, with the largest individuals known to have approached...
is primarily a coastal and offshore species, but can be found far from land. Its body and tail have a shape similar to that of tuna. Its upper and lower lobes are of almost equal size. This provides for both slow cruising and fast chasing speeds.

Cookiecutter shark - The cookiecutter shark
Cookiecutter shark
The cookiecutter shark , also called the cigar shark, is a species of small dogfish shark in the family Dalatiidae. This shark occurs in warm, oceanic waters worldwide, particularly near islands, and has been recorded from as deep as . It migrates vertically up to every day, approaching the...
hunts squid
Squid
Squid are cephalopods of the order Teuthida, which comprises around 300 species. Like all other cephalopods, squid have a distinct head, bilateral symmetry, a mantle, and arms. Squid, like cuttlefish, have eight arms arranged in pairs and two, usually longer, tentacles...
and crustacean
Crustacean
Crustaceans form a very large group of arthropods, usually treated as a subphylum, which includes such familiar animals as crabs, lobsters, crayfish, shrimp, krill and barnacles. The 50,000 described species range in size from Stygotantulus stocki at , to the Japanese spider crab with a leg span...
s, but will attach itself to larger fish or dolphins with its strong suction lips. Using its scoop-shaped lower jaw it will then cut out a conical plug of flesh. Its tail has broad lower and upper lobes of similar shape which are luminescent and may help to lure prey towards the shark.

Unlike bony fish, the sharks have a complex dermal corset made of flexible collagenous fibres and arranged as a helical network surrounding their body. This works as an outer skeleton, providing attachment for their swimming muscles and thus saving energy. A similar arrangement of collagen fibres has been discovered in dolphin
Dolphin
Dolphins are marine mammals that are closely related to whales and porpoises. There are almost forty species of dolphin in 17 genera. They vary in size from and , up to and . They are found worldwide, mostly in the shallower seas of the continental shelves, and are carnivores, mostly eating...
s and squid
Squid
Squid are cephalopods of the order Teuthida, which comprises around 300 species. Like all other cephalopods, squid have a distinct head, bilateral symmetry, a mantle, and arms. Squid, like cuttlefish, have eight arms arranged in pairs and two, usually longer, tentacles...
. Their dermal teeth give them hydrodynamic advantages as they reduce turbulence when swimming.
The source of this article is wikipedia, the free encyclopedia.  The text of this article is licensed under the GFDL.