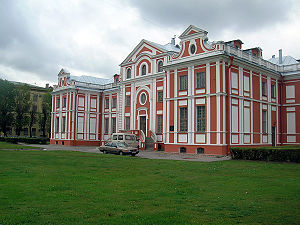 Petrine Baroque is a name applied by art historians to a style of Baroque architecture
Baroque architecture
Baroque architecture is a term used to describe the building style of the Baroque era, begun in late sixteenth century Italy, that took the Roman vocabulary of Renaissance architecture and used it in a new rhetorical and theatrical fashion, often to express the triumph of the Catholic Church and...
and decoration favoured by Peter the Great and employed to design buildings in the newly-founded Russian capital, Saint Petersburg
Saint Petersburg
Saint Petersburg is a city and a federal subject of Russia located on the Neva River at the head of the Gulf of Finland on the Baltic Sea...
, under this monarch and his immediate successors.

Unlike contemporaneous Naryshkin Baroque
Naryshkin Baroque
Naryshkin Baroque, also called Moscow Baroque, or Muscovite Baroque, is the name given to a particular style of Baroque architecture and decoration which was fashionable in Moscow from the turn of the 17th into the early 18th centuries.-Style:...
, favoured in Moscow
Moscow
Moscow is the capital, the most populous city, and the most populous federal subject of Russia. The city is a major political, economic, cultural, scientific, religious, financial, educational, and transportation centre of Russia and the continent...
, the Petrine Baroque represented a drastic rupture with Byzantine traditions that had dominated Russian architecture
Russian architecture
Russian architecture follows a tradition whose roots were established in the Eastern Slavic state of Kievan Rus'. After the fall of Kiev, Russian architectural history continued in the principalities of Vladimir-Suzdal, Novgorod, the succeeding states of the Tsardom of Russia, the Russian Empire,...
for almost a millennium. Its chief practitioners - Domenico Trezzini
Domenico Trezzini
Domenico Trezzini was a Swiss Italian architect who elaborated the Petrine Baroque style of Russian architecture.Domenico was born in Astano, near Lugano, in the Italian-speaking Ticino . He probably studied in Rome...
, Andreas Schlüter
Andreas Schlüter
Andreas Schlüter was a German baroque sculptor and architect associated with the Petrine Baroque style of architecture and decoration.-Biography:...
, and Mikhail Zemtsov
Mikhail Zemtsov
Mikhail Grigorievich Zemtsov was a Russian architect who practiced a sober, restrained Petrine Baroque style, which he learned from his peer Domenico Tresini...
- drew inspiration from a rather modest Dutch, Danish, and Swedish architecture of the time.

Extant examples of the style in St Petersburg are the Peter and Paul Cathedral
Peter and Paul Cathedral
The Peter and Paul Cathedral is a Russian Orthodox cathedral located inside the Peter and Paul Fortress in St. Petersburg, Russia. It is the first and oldest landmark in St. Petersburg, built between 1712 and 1733 on Zayachy Island along the Neva River. Both the cathedral and the fortress were...
(Trezzini), the Twelve Colleges (Trezzini), the Kunstkamera
Kunstkamera
The Kunstkamera was the first museum in Russia. Established by Peter the Great and completed in 1727, the Kunstkammer Building hosts the Peter the Great Museum of Anthropology and Ethnography, with a collection of almost 2,000,000 items...
(Zemtsov), Kikin Hall (Schlüter) and Menshikov Palace
Menshikov Palace
The Menshikov Palace is a Petrine Baroque edifice in Saint Petersburg, situated on Universitetskaya Embankment of the Bolshaya Neva on Vasilyevsky Island. It was the first stone building in the city...
(Giovanni Fontana)

The Petrine Baroque structures outside St Petersburg are scarce; they include the Menshikov Tower
Menshikov Tower
Menshikov Tower , the Church of Archangel Gabriel is a Baroque Russian Orthodox Church in Basmanny District of Moscow, within the Boulevard Ring. The church was initially built in 1707 to order of Alexander Menshikov by Ivan Zarudny assisted by Domenico Trezzini, a team of Italian-Swiss craftsmen...
in Moscow
Moscow
Moscow is the capital, the most populous city, and the most populous federal subject of Russia. The city is a major political, economic, cultural, scientific, religious, financial, educational, and transportation centre of Russia and the continent...
and the Kadriorg Palace
Kadriorg Palace
Catherinethal is a Petrine Baroque palace of Catherine I of Russia in Tallinn, Estonia. It was built after the Great Northern War to Nicola Michetti's designs by Gaetano Chiaveri and Mikhail Zemtsov. In the 20th century the Estonian version of the name, Kadriorg, gained currency and came to be...
in Tallinn
Tallinn
Tallinn is the capital and largest city of Estonia. It occupies an area of with a population of 414,940. It is situated on the northern coast of the country, on the banks of the Gulf of Finland, south of Helsinki, east of Stockholm and west of Saint Petersburg. Tallinn's Old Town is in the list...
.