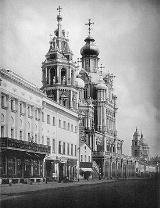 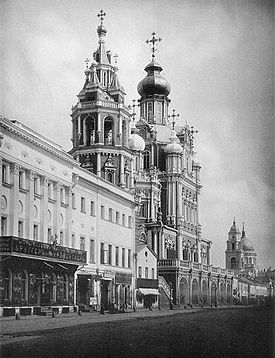 Naryshkin Baroque, also called Moscow Baroque, or Muscovite Baroque, is the name given to a particular style
Architectural style
Architectural styles classify architecture in terms of the use of form, techniques, materials, time period, region and other stylistic influences. It overlaps with, and emerges from the study of the evolution and history of architecture...
of Baroque architecture
Baroque architecture
Baroque architecture is a term used to describe the building style of the Baroque era, begun in late sixteenth century Italy, that took the Roman vocabulary of Renaissance architecture and used it in a new rhetorical and theatrical fashion, often to express the triumph of the Catholic Church and...
and decoration which was fashionable in Moscow
Moscow
Moscow is the capital, the most populous city, and the most populous federal subject of Russia. The city is a major political, economic, cultural, scientific, religious, financial, educational, and transportation centre of Russia and the continent...
from the turn of the 17th into the early 18th centuries.

Naryshkin baroque is essentially a fusion of traditional Russian architecture
Russian architecture
Russian architecture follows a tradition whose roots were established in the Eastern Slavic state of Kievan Rus'. After the fall of Kiev, Russian architectural history continued in the principalities of Vladimir-Suzdal, Novgorod, the succeeding states of the Tsardom of Russia, the Russian Empire,...
with baroque
Baroque
The Baroque is a period and the style that used exaggerated motion and clear, easily interpreted detail to produce drama, tension, exuberance, and grandeur in sculpture, painting, literature, dance, and music...
elements imported from Central Europe
Central Europe
Central Europe or alternatively Middle Europe is a region of the European continent lying between the variously defined areas of Eastern and Western Europe...
via Ukrainian baroque
Ukrainian Baroque
Ukrainian Baroque or Cossack Baroque is an architectural style that emerged in Ukraine during the Hetmanate era, in the 17th and 18th centuries....
. It is in contrast to the more radical approach of Petrine baroque
Petrine Baroque
Petrine Baroque is a name applied by art historians to a style of Baroque architecture and decoration favoured by Peter the Great and employed to design buildings in the newly-founded Russian capital, Saint Petersburg, under this monarch and his immediate successors.Unlike contemporaneous Naryshkin...
, exemplified by Cathedral of Ss. Peter and Paul
Peter and Paul Cathedral
The Peter and Paul Cathedral is a Russian Orthodox cathedral located inside the Peter and Paul Fortress in St. Petersburg, Russia. It is the first and oldest landmark in St. Petersburg, built between 1712 and 1733 on Zayachy Island along the Neva River. Both the cathedral and the fortress were...
in St. Petersburg and the Menshikov tower
Menshikov Tower
Menshikov Tower , the Church of Archangel Gabriel is a Baroque Russian Orthodox Church in Basmanny District of Moscow, within the Boulevard Ring. The church was initially built in 1707 to order of Alexander Menshikov by Ivan Zarudny assisted by Domenico Trezzini, a team of Italian-Swiss craftsmen...
in Moscow
Moscow
Moscow is the capital, the most populous city, and the most populous federal subject of Russia. The city is a major political, economic, cultural, scientific, religious, financial, educational, and transportation centre of Russia and the continent...
.

The first baroque churches were built in the estates of the Naryshkin
Naryshkin
Naryshkin is a Russian surname and may refer to:* Members of the Naryshkin family* Sergey Naryshkin , a politician* Two men of the name Kirill Naryshkin...
family of Moscow boyar
Boyar
A boyar, or bolyar , was a member of the highest rank of the feudal Moscovian, Kievan Rus'ian, Bulgarian, Wallachian, and Moldavian aristocracies, second only to the ruling princes , from the 10th century through the 17th century....
s. It was the family of Natalia Naryshkina, Peter the Great
Peter I of Russia
Peter the Great, Peter I or Pyotr Alexeyevich Romanov Dates indicated by the letters "O.S." are Old Style. All other dates in this article are New Style. ruled the Tsardom of Russia and later the Russian Empire from until his death, jointly ruling before 1696 with his half-brother, Ivan V...
's mother. Most notable in this category of small suburban churches were the Intercession in Fili
Church of the Intercession at Fili
The Church of the Intercession at Fili is a Naryshkin baroque church commissioned by the boyar Lev Naryshkin in his suburban estate Fili; the territory has belonged to City of Moscow since 1935...
(1693-96), the Sign in Dubrovitsy (1690-97), and the Saviour in Ubory (1694-97). They were built in red brick
Brick
A brick is a block of ceramic material used in masonry construction, usually laid using various kinds of mortar. It has been regarded as one of the longest lasting and strongest building materials used throughout history.-History:...
with profuse detailed decoration in white stone. The belfry
Bell tower
A bell tower is a tower which contains one or more bells, or which is designed to hold bells, even if it has none. In the European tradition, such a tower most commonly serves as part of a church and contains church bells. When attached to a city hall or other civic building, especially in...
was not any more placed beside the church as was common in the 17th century, but on the facade
Facade
A facade or façade is generally one exterior side of a building, usually, but not always, the front. The word comes from the French language, literally meaning "frontage" or "face"....
itself, usually surmounting the octagonal central church and producing daring vertical compositions.

As the style gradually spread around Russia
Russia
Russia or , officially known as both Russia and the Russian Federation , is a country in northern Eurasia. It is a federal semi-presidential republic, comprising 83 federal subjects...
, many monasteries were remodeled after the latest fashion. The most delightful of these were the Novodevichy Convent
Novodevichy Convent
Novodevichy Convent, also known as Bogoroditse-Smolensky Monastery is probably the best-known cloister of Moscow. Its name, sometimes translated as the New Maidens' Monastery, was devised to differ from an ancient maidens' convent within the Moscow Kremlin. Unlike other Moscow cloisters, it has...
and the Donskoy Monastery
Donskoy Monastery
Donskoy Monastery is a major monastery in Moscow, founded in 1591 in commemoration of Moscow's deliverance from an imminent threat of Khan Kazy-Girey’s invasion...
in Moscow, as well as Krutitsy
Krutitsy
Krutitsy Metochion , full name: Krutitsy Patriarchal Metochion is an operating ecclesiastical estate of Russian Orthodox Church, located in Tagansky District of Moscow, Russia, 3 kilometers south-east from the Kremlin. The name Krutitsy , i.e. steep river banks, originally meant the hills...
metochion
Metochion
In Eastern Orthodoxy, a metochion is an ecclesiastical embassy church, usually from one autocephalous or autonomous church to another. The term is also used to refer to a parish representation of a monastery or a patriarch....
and Solotcha Cloister near Riazan. Civic architecture also sought to conform to the baroque aesthetics, e.g., the Sukharev Tower
Sukharev Tower
The Sukharev Tower was one of the best known landmarks and symbols of Moscow until its destruction by the Soviet authorities in 1934. The tower was built in the Moscow baroque style at the intersection of the Garden Ring with the Sretenka street in 1692-1695.Tsar Peter the Great ordered the...
in Moscow
Moscow
Moscow is the capital, the most populous city, and the most populous federal subject of Russia. The city is a major political, economic, cultural, scientific, religious, financial, educational, and transportation centre of Russia and the continent...
and there is also a neo-form of this style like the Principal Medicine Store
State Historical Museum
The State Historical Museum of Russia is a museum of Russian history wedged between Red Square and Manege Square in Moscow. Its exhibitions range from relics of the prehistoric tribes inhabiting present-day Russia, through priceless artworks acquired by members of the Romanov dynasty...
on Red Square
Red Square
Red Square is a city square in Moscow, Russia. The square separates the Kremlin, the former royal citadel and currently the official residence of the President of Russia, from a historic merchant quarter known as Kitai-gorod...
. The most important architects associated with the Naryshkin Baroque were Yakov Bukhvostov
Yakov Bukhvostov
Yakov Grigoryevich Bukhvostov was a Russian architect, associated with the Naryshkin Baroque style. It has been documented that he constructed a number of buildings, in and around Moscow and one in Ryazan, of red brick with rich external white-stone decoration.-Career:The biography of Bukhvostov...
and Peter Potapov.