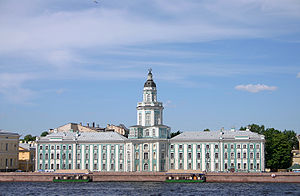 The Kunstkamera was the first museum in Russia
Russia
Russia or , officially known as both Russia and the Russian Federation , is a country in northern Eurasia. It is a federal semi-presidential republic, comprising 83 federal subjects...
. Established by Peter the Great
Peter I of Russia
Peter the Great, Peter I or Pyotr Alexeyevich Romanov Dates indicated by the letters "O.S." are Old Style. All other dates in this article are New Style. ruled the Tsardom of Russia and later the Russian Empire from until his death, jointly ruling before 1696 with his half-brother, Ivan V...
and completed in 1727, the Kunstkammer Building hosts the Peter the Great Museum of Anthropology and Ethnography, with a collection of almost 2,000,000 items. It is located on the Universitetskaya Embankment
Universitetskaya Embankment
Universitetskaya Embankment is a 1.2 km long embankment on the right bank of the Bolshaya Neva, on Vasilievsky Island in Saint Petersburg, Russia. Starting at the Spit of Vasilievsky Island, it spans between Palace Bridge and Blagoveshchensky Bridge....
in Saint Petersburg
Saint Petersburg
Saint Petersburg is a city and a federal subject of Russia located on the Neva River at the head of the Gulf of Finland on the Baltic Sea...
, facing the Winter Palace
Winter Palace
The Winter Palace in Saint Petersburg, Russia, was, from 1732 to 1917, the official residence of the Russian monarchs. Situated between the Palace Embankment and the Palace Square, adjacent to the site of Peter the Great's original Winter Palace, the present and fourth Winter Palace was built and...
.

The Kunstkamera was established by Peter the Great on the Neva River
Neva River
The Neva is a river in northwestern Russia flowing from Lake Ladoga through the western part of Leningrad Oblast to the Neva Bay of the Gulf of Finland. Despite its modest length , it is the third largest river in Europe in terms of average discharge .The Neva is the only river flowing from Lake...
front. The turreted Petrine Baroque
Petrine Baroque
Petrine Baroque is a name applied by art historians to a style of Baroque architecture and decoration favoured by Peter the Great and employed to design buildings in the newly-founded Russian capital, Saint Petersburg, under this monarch and his immediate successors.Unlike contemporaneous Naryshkin...
building of the Kunstkamera designed by Georg Johann Mattarnovy
Georg Johann Mattarnovy
Georg Johann Mattarnovi was a German Baroque architect and sculptor, notable for his work in Saint Petersburg.The birthplace of Mattarnovi is unknown, but most probably it was Prussia. His year of birth is also unknown. He was a sculptor, and a disciple and assistant of German architect Andreas...
was completed by 1727. The foundation stone for the Kunstkammer was laid in 1719.

Peter's museum was a cabinet of curiosities
Cabinet of curiosities
A cabinet of curiosities was an encyclopedic collection in Renaissance Europe of types of objects whose categorical boundaries were yet to be defined. They were also known by various names such as Cabinet of Wonder, and in German Kunstkammer or Wunderkammer...
dedicated to preserving "natural and human curiosities and rarities", a very typical type of collection in the period. The tsar's personal collection, originally stored in the Summer Palace
Summer Palace of Peter the Great
The Summer Palace is a diminutive residence of Peter the Great that was built in 1710-14 in his new capital, St. Petersburg, on the bank of the Fontanka River, in what is now the Summer Garden. The design was by Domenico Trezzini...
, features a large assortment of human and animal fetus
Fetus
A fetus is a developing mammal or other viviparous vertebrate after the embryonic stage and before birth.In humans, the fetal stage of prenatal development starts at the beginning of the 11th week in gestational age, which is the 9th week after fertilization.-Etymology and spelling variations:The...
es with anatomical deficiencies, which Peter had seen in 1697 visiting Frederick Ruysch and Levinus Vincent
Levinus Vincent
Levinus Vincent was a rich Dutch damask merchant of the Anabaptist faith. He collected naturalia and artificialia -...
. The underlying idea of their kunstkammers was to acquire full knowledge of the world. The Dutch word "konst-kamer" seems to be introduced by the surgeon Stephanus Blankaart in 1680.

The Kunstkamera of Peter the Great is often seen as a haphazard collection of incoherent rarities, but it seems they were collected systematically subject to a well defined plan. Peter's main interest was in "naturalia", rather than the so-called "artificialia". Peter encouraged research of deformities, all along trying to debunk the superstitious
Superstition
Superstition is a belief in supernatural causality: that one event leads to the cause of another without any process in the physical world linking the two events....
fear of monsters. He issued an ukase
Ukase
A ukase , in Imperial Russia, was a proclamation of the tsar, government, or a religious leader that had the force of law...
ordering malformed, still-born infants to be sent from all over the country to the imperial collection. He subsequently had them put on show in the Kunstkamera as examples of accidents of nature.

In 1716 Peter established the mineral cabinet of Kunstkamera, depositing there a collection of 1195 minerals which he had bought from Gotvald, a Danzig
Gdansk
Gdańsk is a Polish city on the Baltic coast, at the centre of the country's fourth-largest metropolitan area.The city lies on the southern edge of Gdańsk Bay , in a conurbation with the city of Gdynia, spa town of Sopot, and suburban communities, which together form a metropolitan area called the...
doctor. The collection was enriched with Russian minerals. It was a predecessor of the Fersman Mineralogical Museum
Fersman Mineralogical Museum
Fersman Mineralogical Museum is one of the largest mineral museums of the world. Its collections include more than 135,000 items. Among them natural crystals, geodes, druzes and other kinds of mineral treasures. The museum was named after Alexander Fersman....
, now based in Moscow.

Many items were bought in Amsterdam from pharmacologist Albertus Seba
Albertus Seba
Albertus Seba was a Dutch pharmacist, zoologist and collector.-Career:Born in East-Frisia, Seba moved to Amsterdam as an apprentice and opened around 1700 a pharmacy near the harbour. Seba asked sailors and ship surgeons to bring exotic plants and animal products he could use for preparing drugs...
(1716) and anatomist Frederik Ruysch
Frederik Ruysch
Frederik Ruysch was a Dutch botanist and anatomist, remembered for his developments in anatomical preservation and the creation of dioramas or scenes incorporating human parts...
(1717) and formed the basis for the Academy of Sciences
Academy of Sciences
An Academy of Sciences is a national academy or another learned society dedicated to sciences.In non-English speaking countries, the range of academic fields of the members of a national Academy of Science often includes fields which would not normally be classed as "science" in English...
. The Kunstkamera was specially built to house these two extensive collections. A third acquisition came from Jacob de Wilde, a collector of gems and scientific instruments. Head-physician to the czar, Robert Erskine
Robert Erskine
Colonel Robert Erskine was a Scottish inventor and later an American officer in the Continental Army during the American Revolutionary War....
, and his secretary Johann Daniel Schumacher were responsible for the acquisition.


Museum of Anthropology and Ethnography

In the 1830s, the Kunstkamera collections were dispersed to newly established imperial museums, the most important being the Peter the Great Museum of Anthropology
Anthropology
Anthropology is the study of humanity. It has origins in the humanities, the natural sciences, and the social sciences. The term "anthropology" is from the Greek anthrōpos , "man", understood to mean mankind or humanity, and -logia , "discourse" or "study", and was first used in 1501 by German...
and Ethnography
Ethnography
Ethnography is a qualitative method aimed to learn and understand cultural phenomena which reflect the knowledge and system of meanings guiding the life of a cultural group...
, established in 1879. It has a collection approaching 2,000,000 items and has been known as the Peter the Great Museum since 1903 (in order to distinguish the older museum from the Russian Museum of Ethnography
Russian Museum of Ethnography
The Russian Museum of Ethnography is a museum in St. Petersburg that houses a collection of about 500,000 items relating to the ethnography, or cultural anthropology, of peoples of the former Russian Empire and the Soviet Union.The museum was set up in 1902 as the ethnographic department of the...
).

Originally there were separate museums for anthropology and ethnography, but on 5 December 1878 it was decided to merge them into a single museum with Leopold Schrenk being appointed on November 10th, 1879. It was not until 1887 that the museum was finally provided with its own exhibition premises attached to Kunstkamera in Tamozhennyi pereulok. On 23 September, 1889, the first exhibition of the unified Museum was opened.

One of the most gruesome exhibits is the head of Willem Mons
Willem Mons
Willem Mons was the brother of Peter the Great's long-time mistress Anna Mons, who later served as private secretary to his wife Catherine....
, brother of Anna Mons
Anna Mons
Anna Mons was a German commonner who almost succeeded in marrying Tsar Peter the Great.- Biography :In 1691, during one of his visits to the German Quarter, young Peter I of Russia became enamoured of Anna Mons, the daughter of Dutch wine merchant Johann Mon. It is generally thought he was from...
. In 1747 some objects were lost in a fire. The museum houses 78 watercolours by the Peru
Peru
Peru , officially the Republic of Peru , is a country in western South America. It is bordered on the north by Ecuador and Colombia, on the east by Brazil, on the southeast by Bolivia, on the south by Chile, and on the west by the Pacific Ocean....
vian artist Pancho Fierro, the largest collection outside Peru. These were brought back by Schrenk following his visit there in 1854.