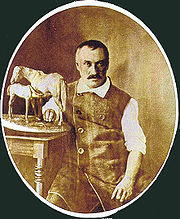 Baron Peter Clodt von Jürgensburg, known in Russian
Russian language
Russian is a Slavic language used primarily in Russia, Belarus, Uzbekistan, Kazakhstan, Tajikistan and Kyrgyzstan. It is an unofficial but widely spoken language in Ukraine, Moldova, Latvia, Turkmenistan and Estonia and, to a lesser extent, the other countries that were once constituent republics...
as Pyotr Karlovich Klodt , was a favourite sculptor of Nicholas I of Russia
Nicholas I of Russia
Nicholas I , was the Emperor of Russia from 1825 until 1855, known as one of the most reactionary of the Russian monarchs. On the eve of his death, the Russian Empire reached its historical zenith spanning over 20 million square kilometers...
.

Klodt's most famous group of horse sculptures, the Horse Tamers, was installed at the Anichkov Bridge
Anichkov Bridge
The Anichkov Bridge is the first and most famous bridge across the Fontanka River in Saint Petersburg, Russia. The current bridge, built in 1841-42 and reconstructed in 1906-08, combines a simple form with some spectacular decorations...
in 1851. He was also responsible for the bronze statue of Ivan Krylov
Ivan Krylov
Ivan Andreyevich Krylov is Russia's best known fabulist. While many of his earlier fables were loosely based on Aesop and Jean de La Fontaine, later fables were original work, often satirizing the incompetent bureaucracy that was stifling social progress in his time.-Life:Ivan Krylov was born in...
in the Summer Garden
Summer Garden
The Summer Garden occupies an island between the Fontanka, Moika, and the Swan Canal in Saint Petersburg and shares its name with the adjacent Summer Palace of Peter the Great.-Original:...
(1848-55). It was the first monument to a poet erected in the Russian Empire
Russian Empire
The Russian Empire was a state that existed from 1721 until the Russian Revolution of 1917. It was the successor to the Tsardom of Russia and the predecessor of the Soviet Union...
. 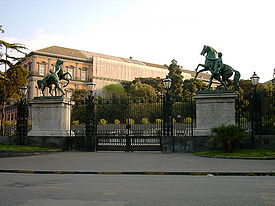 Klodt collaborated with Vasily Demut-Malinovsky
Vasily Demut-Malinovsky
Vasily Ivanovich Demuth-Malinovsky was a Russian sculptor whose works represent the quintessence of the Empire style....
on the statue of Saint Vladimir in Kiev
Kiev
Kiev or Kyiv is the capital and the largest city of Ukraine, located in the north central part of the country on the Dnieper River. The population as of the 2001 census was 2,611,300. However, higher numbers have been cited in the press....
and the statuary for the Narva Triumphal Gate
Narva Triumphal Gate
The Narva Triumphal Arch was erected in the vast Narva Square , Saint Petersburg, in 1814 to commemorate the Russian victory over Napoleon. The wooden structure was constructed on the Narva highway with the purpose of greeting the soldiers who were returning from abroad after their victory over...
. He also sculpted a quadriga
Quadriga
A quadriga is a car or chariot drawn by four horses abreast . It was raced in the Ancient Olympic Games and other contests. It is represented in profile as the chariot of gods and heroes on Greek vases and in bas-relief. The quadriga was adopted in ancient Roman chariot racing...
above the portico of the Bolshoi Theatre
Bolshoi Theatre
The Bolshoi Theatre is a historic theatre in Moscow, Russia, designed by architect Joseph Bové, which holds performances of ballet and opera. The Bolshoi Ballet and Bolshoi Opera are amongst the oldest and most renowned ballet and opera companies in the world...
in Moscow.

Klodt died in his estate in Finland
Finland
Finland , officially the Republic of Finland, is a Nordic country situated in the Fennoscandian region of Northern Europe. It is bordered by Sweden in the west, Norway in the north and Russia in the east, while Estonia lies to its south across the Gulf of Finland.Around 5.4 million people reside...
on 20 November 1867. His son and nephew Mikhail
Mikhail Konstantinovich Clodt
Mikhail Konstantinovich Clodt baron von Jürgensburg was a Russian realistic painter.Mikhail Clodt was born to the artistic family of barons Clodt von Jürgensburg, his father Konstantin Clodt was the first Russian wood engraver, his uncle Peter Clodt von Jürgensburg was a famous Russian sculptor.He...
continued the artistic traditions of the family and became notable painters of the Peredvizhniki
Peredvizhniki
Peredvizhniki , often called The Wanderers or The Itinerants in English, were a group of Russian realist artists who in protest at academic restrictions formed an artists' cooperative; it evolved into the Society for Travelling Art Exhibitions in 1870.- History :In 1863 a group of fourteen students...
school.