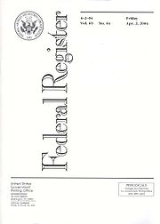 There are no copyright
Copyright
Copyright is a legal concept, enacted by most governments, giving the creator of an original work exclusive rights to it, usually for a limited time...
restrictions on the Federal Register: as a work of the U.S.

Can an individual propose an amendment to a federal regulation? If so, what is the procedure?
More
x