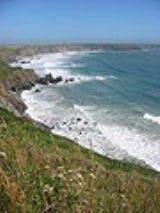 Encyclopedia
Pembrokeshire Coast National Park is a national park
National parks of England and Wales
The national parks of England and Wales are areas of relatively undeveloped and scenic landscape that are designated under the National Parks and Access to the Countryside Act 1949...
along the Pembrokeshire
Pembrokeshire
Pembrokeshire is a county in the south west of Wales. It borders Carmarthenshire to the east and Ceredigion to the north east. The county town is Haverfordwest where Pembrokeshire County Council is headquartered....
coast in West Wales
West Wales
West Wales is the western area of Wales.Some definitions of West Wales include only Pembrokeshire, Ceredigion and Carmarthenshire, an area which historically comprised the Welsh principality of Deheubarth., an area called "South West Wales" in the Nomenclature of Territorial Units for Statistics....
.

It was established as a National Park in 1952, and is the only one in the United Kingdom
United Kingdom
The United Kingdom of Great Britain and Northern IrelandIn the United Kingdom and Dependencies, other languages have been officially recognised as legitimate autochthonous languages under the European Charter for Regional or Minority Languages...
to have been designated primarily because of its spectacular coastline. It is one of three National Parks in Wales
Wales
Wales is a country that is part of the United Kingdom and the island of Great Britain, bordered by England to its east and the Atlantic Ocean and Irish Sea to its west. It has a population of three million, and a total area of 20,779 km²...
, the others being the Brecon Beacons
Brecon Beacons
The Brecon Beacons is a mountain range in South Wales. In a narrow sense, the name refers to the range of popular peaks south of Brecon, including South Wales' highest mountain, Pen y Fan, and which together form the central section of the Brecon Beacons National Park...
(Bannau Brycheiniog) and Snowdonia
Snowdonia
Snowdonia is a region in north Wales and a national park of in area. It was the first to be designated of the three National Parks in Wales, in 1951.-Name and extent:...
(Eryri).

The National Park has a varied landscape of rugged cliff
Cliff
In geography and geology, a cliff is a significant vertical, or near vertical, rock exposure. Cliffs are formed as erosion landforms due to the processes of erosion and weathering that produce them. Cliffs are common on coasts, in mountainous areas, escarpments and along rivers. Cliffs are usually...
s, sandy beach
Beach
A beach is a geological landform along the shoreline of an ocean, sea, lake or river. It usually consists of loose particles which are often composed of rock, such as sand, gravel, shingle, pebbles or cobblestones...
es, wooded estuaries and wild inland hill
Hill
A hill is a landform that extends above the surrounding terrain. Hills often have a distinct summit, although in areas with scarp/dip topography a hill may refer to a particular section of flat terrain without a massive summit A hill is a landform that extends above the surrounding terrain. Hills...
s, covering a total area of 629 km² (242.9 sq mi). It falls into four distinct sections. Running clockwise around the coast, these are the south Pembrokeshire coast, including Caldey Island
Caldey Island
Caldey Island lies south of Tenby in Pembrokeshire, Wales.The island is home to a small village, but is best known for its monastery. Caldey Island is separated from the mainland by the Caldey Sound which is 1 km to 2 km wide between Caldey Island and the coast of Pembrokeshire...
; the Daugleddau estuary; the St Bride's Bay
St Bride's Bay
St Brides Bay is a rocky bay inlet in western Pembrokeshire, West Wales.Either Skomer Island or the mainland extremity of Wooltack Point at the western end of the Marloes Peninsula marks the southern limit of the bay whilst its northern limit is marked by Ramsey Island off St Davids Head...
coast, including the coastal islands; and the Preseli Hills
Preseli Hills
The Preseli Hills or Preseli Mountains are a range of hills in north Pembrokeshire, West Wales...
. However, not all of the park is coastal, and there are even forests and marshes on the edges of the park. 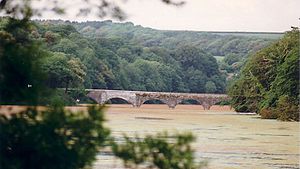 The Park is managed by Pembrokeshire Coast National Park Authority, which has around 130 staff and a committee of 18 members. The Authority's purposes are to conserve the National Park, encourage the public to enjoy and understand it, and to foster the social and economic well-being of the communities within its boundaries. The Authority manages the entire length of the Pembrokeshire Coast Path
Pembrokeshire Coast Path
The Pembrokeshire Coast Path is a National Trail in southwest Wales. It was established in 1970, and is 186 miles long, mostly at cliff-top level, with 35,000 feet of ascent and descent. The northern end is at Poppit Sands, near St...
National Trail. Its offices are in Pembroke Dock
Pembroke Dock
Pembroke Dock is a town in Pembrokeshire, south-west Wales, lying north of Pembroke on the River Cleddau. Originally a small fishing village known as Paterchurch, the town was greatly expanded from 1814 onwards following the construction of a Royal Naval Dockyard...
Brecon Beacons
Brecon Beacons
The Brecon Beacons is a mountain range in South Wales. In a narrow sense, the name refers to the range of popular peaks south of Brecon, including South Wales' highest mountain, Pen y Fan, and which together form the central section of the Brecon Beacons National Park...