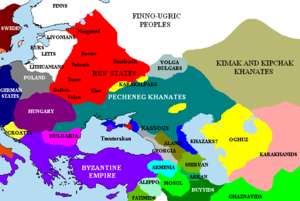 The Pechenegs or Patzinaks were a semi-nomadic
Nomad
Nomadic people , commonly known as itinerants in modern-day contexts, are communities of people who move from one place to another, rather than settling permanently in one location. There are an estimated 30-40 million nomads in the world. Many cultures have traditionally been nomadic, but...
Turkic
Turkic peoples
The Turkic peoples are peoples residing in northern, central and western Asia, southern Siberia and northwestern China and parts of eastern Europe. They speak languages belonging to the Turkic language family. They share, to varying degrees, certain cultural traits and historical backgrounds...
people of the Central Asia
Central Asia
Central Asia is a core region of the Asian continent from the Caspian Sea in the west, China in the east, Afghanistan in the south, and Russia in the north...
n steppes speaking the Pecheneg language
Pecheneg language
Pecheneg language is the extinct Turkic language spoken by the Pechenegs in Eastern Europe.It is most likely a member of the Oghuz branch of the Turkic family, but the poor documentation to it and the absence of any descendant languages of Pecheneg has prevented linguists from making a definite...
which belonged to the Turkic language family
Turkic languages
The Turkic languages constitute a language family of at least thirty five languages, spoken by Turkic peoples across a vast area from Eastern Europe and the Mediterranean to Siberia and Western China, and are considered to be part of the proposed Altaic language family.Turkic languages are spoken...
.

In Mahmud Kashgari
Mahmud Kashgari
Mahmud ibn Hussayn ibn Muhammad al-Kashgari was an 11th century Turkic scholar and lexicographer of Turkic languages from Kashgar.His father, Hussayn, was the mayor of Barsgan and related to the Qara-Khanid ruling dynasty...
's 11th-century work Dīwānu Lughati t-Turk , the name Beçenek is given two meanings. The first is "a Turkish nation living around the country of the Rum
Rome
Rome is the capital of Italy and the country's largest and most populated city and comune, with over 2.7 million residents in . The city is located in the central-western portion of the Italian Peninsula, on the Tiber River within the Lazio region of Italy.Rome's history spans two and a half...
", where Rum was the Turkish word for the Eastern Roman Empire or Byzantine Empire
Byzantine Empire
The Byzantine Empire was the Eastern Roman Empire during the periods of Late Antiquity and the Middle Ages, centred on the capital of Constantinople. Known simply as the Roman Empire or Romania to its inhabitants and neighbours, the Empire was the direct continuation of the Ancient Roman State...
. Kashgari's second definition of Beçenek is "a branch of Oghuz Turks
Oghuz Turks
The Turkomen also known as Oghuz Turks were a historical Turkic tribal confederation in Central Asia during the early medieval Turkic expansion....
"; he subsequently described the Oghuz as being formed of 22 branches, of which the 19th branch was named Beçenek. Max Vasmer
Max Vasmer
Max Vasmer was a Russian-born German linguist who studied problems of etymology of Indo-European, Finno-Ugric and Turkic languages and worked on history of Slavic, Baltic, Iranian, and Finno-Ugric peoples....
derives this name from the Turkic word for "brother-in-law, relative" ( and ). According to Kashgari, Pechenegs are one of Üçok tribes of the Oghuz.

Whatever the truth of this, the Pechenegs emerge in the historical records only in the 8th and 9th centuries, inhabiting the region between the lower Volga, the Don and the Ural Mountains
Ural Mountains
The Ural Mountains , or simply the Urals, are a mountain range that runs approximately from north to south through western Russia, from the coast of the Arctic Ocean to the Ural River and northwestern Kazakhstan. Their eastern side is usually considered the natural boundary between Europe and Asia...
. By the 9th and 10th centuries, they controlled much of the steppes of southwestern Eurasia
Eurasia
Eurasia is a continent or supercontinent comprising the traditional continents of Europe and Asia ; covering about 52,990,000 km2 or about 10.6% of the Earth's surface located primarily in the eastern and northern hemispheres...
and the Crimea
Crimea
Crimea , or the Autonomous Republic of Crimea , is a sub-national unit, an autonomous republic, of Ukraine. It is located on the northern coast of the Black Sea, occupying a peninsula of the same name...
n Peninsula. Although an important factor in the region at the time, like most nomadic tribes their concept of statecraft failed to go beyond random attacks on neighbours and spells as mercenaries for other powers.

According to Constantine Porphyrogenitus
Constantine VII
Constantine VII Porphyrogennetos or Porphyrogenitus, "the Purple-born" was the fourth Emperor of the Macedonian dynasty of the Byzantine Empire, reigning from 913 to 959...
, writing in c. 950, Patzinakia, the Pecheneg realm, stretched west as far as the Siret River
Siret River
The Siret or Sireth is a river that rises from the Carpathians in the Northern Bukovina region of Ukraine, and flows southward into Romania for 470 km before it joins the Danube...
(or even the Eastern Carpathian Mountains
Carpathian Mountains
The Carpathian Mountains or Carpathians are a range of mountains forming an arc roughly long across Central and Eastern Europe, making them the second-longest mountain range in Europe...
), and was four days distant from "Tourkias" (i.e. Hungary
Hungary
Hungary , officially the Republic of Hungary , is a landlocked country in Central Europe. It is situated in the Carpathian Basin and is bordered by Slovakia to the north, Ukraine and Romania to the east, Serbia and Croatia to the south, Slovenia to the southwest and Austria to the west. The...
).

In the 9th century, the Byzantines
Byzantine Empire
The Byzantine Empire was the Eastern Roman Empire during the periods of Late Antiquity and the Middle Ages, centred on the capital of Constantinople. Known simply as the Roman Empire or Romania to its inhabitants and neighbours, the Empire was the direct continuation of the Ancient Roman State...
became allied with the Pechenegs, using them to fend off other, more dangerous tribes such as the Rus
Rus' (people)
The Rus' were a group of Varangians . According to the Primary Chronicle of Rus, compiled in about 1113 AD, the Rus had relocated from the Baltic region , first to Northeastern Europe, creating an early polity which finally came under the leadership of Rurik...
and the Magyars.

The Uzes, another Turkic
Turkic peoples
The Turkic peoples are peoples residing in northern, central and western Asia, southern Siberia and northwestern China and parts of eastern Europe. They speak languages belonging to the Turkic language family. They share, to varying degrees, certain cultural traits and historical backgrounds...
steppe people, eventually expelled the Pechenegs from their homeland; in the process, they also seized most of their livestock and other goods. An alliance of the Oghuz
Oghuz Turks
The Turkomen also known as Oghuz Turks were a historical Turkic tribal confederation in Central Asia during the early medieval Turkic expansion....
, Kimeks and Karluks was also pressing the Pechenegs, but another group, the Samanid
Samanid
The Samani dynasty , also known as the Samanid Empire, or simply Samanids was a Persian state and empire in Central Asia and Greater Iran, named after its founder Saman Khuda, who converted to Sunni Islam despite being from Zoroastrian theocratic nobility...
s, defeated that alliance. Driven further west by the Khazars
Khazars
The Khazars were semi-nomadic Turkic people who established one of the largest polities of medieval Eurasia, with the capital of Atil and territory comprising much of modern-day European Russia, western Kazakhstan, eastern Ukraine, Azerbaijan, large portions of the northern Caucasus , parts of...
and Cumans by 889, the Pechenegs in turn drove the Magyars west of the Dnieper River by 892.

Bulgarian
Bulgarians
The Bulgarians are a South Slavic nation and ethnic group native to Bulgaria and neighbouring regions. Emigration has resulted in immigrant communities in a number of other countries.-History and ethnogenesis:...
Tsar Simeon I employed the Pechenegs to help fend off the Magyars. The Pechenegs were so successful that they drove out the Magyars remaining in Etelköz and the Pontic steppes, forcing them westward up the lower Danube
Danube
The Danube is a river in the Central Europe and the Europe's second longest river after the Volga. It is classified as an international waterway....
, Transdanubia
Transdanubia
Transdanubia is a traditional region of Hungary.-Traditional interpretation:The borders of Transdanubia are the Danube river , the Drava and Mura rivers and the foothills of the Alps roughly along the border between Hungary and Austria .Transdanubia comprises the counties of Győr-Moson-Sopron,...
and towards the Pannonian plain, where they later founded a Hungarian state
Kingdom of Hungary
The Kingdom of Hungary comprised present-day Hungary, Slovakia and Croatia , Transylvania , Carpatho Ruthenia , Vojvodina , Burgenland , and other smaller territories surrounding present-day Hungary's borders...
. 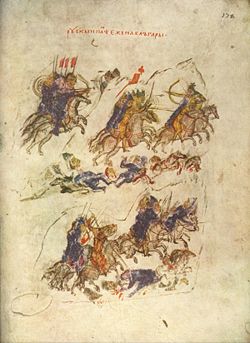 After centuries of fighting involving all their neighbours—the Byzantine Empire, Bulgaria
Bulgaria
Bulgaria , officially the Republic of Bulgaria , is a parliamentary democracy within a unitary constitutional republic in Southeast Europe. The country borders Romania to the north, Serbia and Macedonia to the west, Greece and Turkey to the south, as well as the Black Sea to the east...
, Kievan Rus, Khazaria and the Magyars—the Pechenegs were annihilated as an independent force at the Battle of Levounion
Battle of Levounion
The Battle of Levounion was the first decisive Byzantine victory of the Komnenian restoration. On April 29, 1091, an invading force of Pechenegs was heavily defeated by the combined forces of the Byzantine Empire under Alexios I Komnenos and his Cuman allies....
by a combined Byzantine and Cuman army under Byzantine Emperor Alexios I Komnenos
Alexios I Komnenos
Alexios I Komnenos, Latinized as Alexius I Comnenus , was Byzantine emperor from 1081 to 1118, and although he was not the founder of the Komnenian dynasty, it was during his reign that the Komnenos family came to full power. The title 'Nobilissimus' was given to senior army commanders,...
in 1091. Attacked again in 1094 by the Cumans, many Pechenegs were slain or absorbed. They were again defeated by the Byzantines at the Battle of Beroia
Battle of Beroia
The Battle of Beroia was fought between the Pechenegs and Emperor John II Komnenos of the Byzantine Empire in the year 1122 in what is now Bulgaria, and resulted in the disappearance of the Pecheneg people as an independent force....
in 1122, on the territory of modern day Bulgaria. For some time, significant communities of Pechenegs still remained in the Kingdom of Hungary. With time Pechenegs lost their national identity and were fully assimilated mostly with Magyars and Bulgarians
Bulgarians
The Bulgarians are a South Slavic nation and ethnic group native to Bulgaria and neighbouring regions. Emigration has resulted in immigrant communities in a number of other countries.-History and ethnogenesis:...
.

In the 12th century, according to Byzantine historian John Kinnamos
John Kinnamos
Joannes Kinnamos or John Cinnamus was a Greek historian. He was imperial secretary to Emperor Manuel I , whom he accompanied on his campaigns in Europe and Asia Minor...
, the Pechenegs fought as mercenaries for the Byzantine Emperor Manuel I Comnenus in southern Italy against the Norman
Normans
The Normans were the people who gave their name to Normandy, a region in northern France. They were descended from Norse Viking conquerors of the territory and the native population of Frankish and Gallo-Roman stock...
king of Sicily William the Bad
William I of Sicily
William I , called the Bad or the Wicked, was the second king of Sicily, ruling from his father's death in 1154 to his own...
. A group was present at the battle of Andria
Andria, Italy
Andria is a city and comune in Apulia . It is an agricultural and service center, producing wine, olives and almonds...
in 1155.