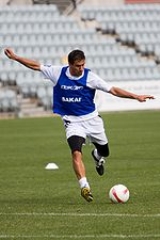 Encyclopedia
Paul Agostino is an retired Australian football (soccer) player who played as a striker. He played the majority of his club football outside Australia, most notably with 1860 Munich
TSV 1860 München
Turn- und Sportverein München von 1860, commonly known as TSV 1860 München or 1860 Munich, is a German sports club based in Munich, Bavaria. The club's football team plays in the Second Bundesliga, after relegation from the Bundesliga following the 2003–04 season...
in Germany
Germany
Germany , officially the Federal Republic of Germany , is a federal parliamentary republic in Europe. The country consists of 16 states while the capital and largest city is Berlin. Germany covers an area of 357,021 km2 and has a largely temperate seasonal climate...
for ten years. Agostino attended Findon High School in his hometown of Adelaide
Adelaide
Adelaide is the capital city of South Australia and the fifth-largest city in Australia. Adelaide has an estimated population of more than 1.2 million...
.

Having started his club career at Salisbury United
Salisbury United
Salisbury United Football Club are a football club from Salisbury, South Australia. Salisbury play in the FFSA South Australian State League. Their home ground is at Steve Jarvis Park.-History:...
, the South Australian striker burst on to the national scene in 1991 in his first season at senior level with West Adelaide SC
West Adelaide SC
West Adelaide Soccer Club is an Australian football club from Adelaide, Australia. Currently it plays in the FFSA State League Competition. It participated in the National Soccer League from the 1977 season until the end of the 1998/99 season, except for the periods 1987-89 and 1990-91. It was...
in the old and now defunct NSL
National Soccer League
The National Soccer League is the former national association football competition in Australasia, overseen by Soccer Australia and later the Australian Soccer Association. The NSL spanned 28 seasons from its inception in 1977, until its demise in 2004...
. It was at this time that "Aga" was picked in the Australian World Youth Championships squad – a squad which contained the likes of Paul Okon
Paul Okon
Paul Okon is a former Australian football player who retired after playing with Australian side Newcastle United Jets....
and Mark Bosnich
Mark Bosnich
Mark Bosnich is a retired Australian football player and football pundit. He represented Australia 17 times and played for English Premier League clubs Aston Villa, Manchester United and Chelsea.-Manchester United :...
during one of Australia's 'Golden Generations' – which made the semi-finals of that competition.

Agostino left for Europe in 1992 and headed for Switzerland
Switzerland
Switzerland name of one of the Swiss cantons. ; ; ; or ), in its full name the Swiss Confederation , is a federal republic consisting of 26 cantons, with Bern as the seat of the federal authorities. The country is situated in Western Europe,Or Central Europe depending on the definition....
, where he signed with Young Boys
BSC Young Boys
Berner Sport Club Young Boys 1898 is a Swiss sporting club based in the capital city of Bern. The name is often abbreviated to YB . Abroad, YB is often referred to as Young Boys Bern. The club's colors are yellow and black....
. Agostino stayed in Bern for two seasons which was invaluable in enabling him to adapt to European life and football. It was in Switzerland that he learnt to speak German which would later help his move to Germany in 1997. He then had a short stint with Yverdon before making the move to England. Agostino signed with Bristol City in 1995 and it was in his second season with Bristol City that he began to score more regularly, bagging 16 goals in the old Division 1 (the second-tier of English club football).

After two productive seasons in Bristol
Bristol
Bristol is a city, unitary authority area and ceremonial county in South West England, with an estimated population of 433,100 for the unitary authority in 2009, and a surrounding Larger Urban Zone with an estimated 1,070,000 residents in 2007...
, Agostino's growing reputation caught the eye of German Bundesliga
2. Fußball-Bundesliga
- Changes in division set-up :* Number of clubs: currently 18. From 1974 to 1981 there were two conferences, each of 20 teams. In 1981–91 it had 20...
side 1860 München. He was signed by the club in 1997 at the age of 22. Agostino stayed with the Munich
Munich
Munich The city's motto is "" . Before 2006, it was "Weltstadt mit Herz" . Its native name, , is derived from the Old High German Munichen, meaning "by the monks' place". The city's name derives from the monks of the Benedictine order who founded the city; hence the monk depicted on the city's coat...
club for a full decade, enduring spells both in and out of the side. Agostino played at the highest level while in Munich, representing 1860 in both the Champions League
UEFA Champions League
The UEFA Champions League, known simply the Champions League and originally known as the European Champion Clubs' Cup or European Cup, is an annual international club football competition organised by the Union of European Football Associations since 1955 for the top football clubs in Europe. It...
and the UEFA Cup. He enjoyed his best form for 1860 in the 2000–01 season, scoring 12 goals for the light blues, while Agostino regularly featured in the first team from 1999 to 2002. He fell down the pecking order at 1860 after this and typically played only a handful of games each season until it was revealed the he would be leaving the club on amicable terms at the end of the Second Bundesliga 2006–07 season.

It was announced in February 2007 that A-League
A-League
The A-League is the top Australasian professional football league. Run by Australian governing body Football Federation Australia , it was founded in 2004 following the folding of the National Soccer League and staged its inaugural season in 2005–06. It is sponsored by Hyundai Motor Company...
team Adelaide United
Adelaide United FC
Adelaide United Football Club is a professional football club based in Adelaide, South Australia, Australia. It currently participates in the A-League as the sole team from the state of South Australia. Adelaide is one of the most successful clubs in the A-League. The club's home ground is...
had agreed on a two-year contract with Agostino which saw the striker return to his home city for the first time in fifteen years.

Although never prolific in his goal-scoring, Agostino maintained around a one-goal-every-four-games ratio throughout his career. The obvious exception is his national-team record, where he averaged almost a goal every other game.

His injury-prone record did endear him to the A-League public, with many questioning the value for money that Adelaide are getting from their 'marquee' player. It was announced on Tuesday 30 December 2008 that Agostino would retire at the end of the 2008–09 season.

Agostino was a regular member of Socceroos squads during the 1990s and played for Australia twenty times at senior international level scoring nine goals.


1 – included A-League
A-League
The A-League is the top Australasian professional football league. Run by Australian governing body Football Federation Australia , it was founded in 2004 following the folding of the National Soccer League and staged its inaugural season in 2005–06. It is sponsored by Hyundai Motor Company...
final series statistics
2 – includes Club World Cup
FIFA Club World Cup
The FIFA Club World Cup is a football competition between the champion clubs from all six continental confederations.The first FIFA Club World Championship took place in Brazil in January 2000...
statistics; UEFA Cup statistics; UEFA Intertoto Cup
UEFA Intertoto Cup
The UEFA Intertoto Cup, also abbreviated as UI Cup and originally called the International Football Cup, was a summer football competition for European clubs that had not qualified for one of the two major UEFA competitions, the Champions League and the UEFA Cup. The competition was discontinued...
statistics; Asian Champions League
AFC Champions League
The AFC Champions League is the premier Asian club football competition hosted annually by Asian Football Confederation . The tournament is contested among the top thirty-two clubs from the top 10 Asian leagues, two of which must qualify through the playoffs...
statistics (included in season commencing after group stages).