Encyclopedia
The (English
English language
English is a West Germanic language that arose in the Anglo-Saxon kingdoms of England and spread into what was to become south-east Scotland under the influence of the Anglian medieval kingdom of Northumbria...
: National Center for Space Studies) is the French government space agency (administratively, a "public administration with industrial and commercial purpose"). Established under President Charles de Gaulle
Charles de Gaulle
Charles André Joseph Marie de Gaulle was a French general and statesman who led the Free French Forces during World War II. He later founded the French Fifth Republic in 1958 and served as its first President from 1959 to 1969....
in 1961, its headquarters are located in central Paris
Paris
Paris is the capital and largest city in France, situated on the river Seine, in northern France, at the heart of the Île-de-France region...
and it is under the supervision of the French Ministries of Defence
Minister of Defence (France)
The Minister of Defense and Veterans Affairs is the French government cabinet member charged with running the military of France....
and Research. It operates out of the Guiana Space Centre, but also has payloads launched from space centres operated by other countries. CNES formerly was responsible for the training of French astronauts, but the last active CNES astronauts transferred to the European Space Agency
European Space Agency
The European Space Agency , established in 1975, is an intergovernmental organisation dedicated to the exploration of space, currently with 18 member states...
in 2001.

France was the third space power to achieve access to space, sharing technologies with Europe to develop the Ariane launcher family. Commercial competition in space is fierce, so launch services must be tailored to space operators’ needs. The new versions of Ariane 5
Ariane 5
Ariane 5 is, as a part of Ariane rocket family, an expendable launch system used to deliver payloads into geostationary transfer orbit or low Earth orbit . Ariane 5 rockets are manufactured under the authority of the European Space Agency and the Centre National d'Etudes Spatiales...
can launch large satellites or perform dual launches while the Vega
Vega (launcher)
Vega is an expendable launch system being developed for Arianespace jointly by the Italian Space Agency and the European Space Agency. Development began in 1998 and the first launch, which will take place from the Guiana Space Centre, is planned for early 2012...
and Soyuz-2 are small and medium-lift launchers.

CNES and its partners in Europe—through the Global Monitoring for Environment and Security initiative (GMES)—and around the world have put in place satellites dedicated to observing the land, oceans and atmosphere, as well as to hazard and crisis management.

The best-known are the SPOT satellites
SPOT (satellites)
SPOT is a high-resolution, optical imaging Earth observation satellite system operating from space. It is run by Spot Image based in Toulouse, France...
flying the Vegetation instrument, the Topex/Poseidon and Jason-1 oceanography satellites, the Argos system, Envisat and—in the near future—Jason-2 and the Pleiades satellites
Pleiades satellites
The Pléiades constellation is composed of two very-high-resolution optical Earth-imaging satellites. Pléiades 1 and Pléiades 2 will provide coverage of Earth’s surface with a repeat cycle of 26 days ....
.

CNES is taking part in the Galileo
Galileo positioning system
Galileo is a global navigation satellite system currently being built by the European Union and European Space Agency . The €20 billion project is named after the famous Italian astronomer Galileo Galilei...
navigation programme alongside the European Union and ESA, and—in a wider international context—in the Cospas-Sarsat search-and-rescue system.

In addition to Spot and the future Pleiades satellites, CNES is working for the defence community as prime contractor for the Helios satellites.

GMES
GMES
Global Monitoring for Environment and Security is a joint initiative of the European Commission and European Space Agency, which aims at achieving an autonomous and operational Earth observation capacity....
—a joint initiative involving the EU, ESA and national space agencies—pools space resources to monitor the environment and protect populations, but it also encompasses satellite support for armed forces and for European organisations on humanitarian or peacekeeping missions.

France’s contribution to the International Space Station is giving French scientists the opportunity to perform original experiments in microgravity. The CNES is currently studying formation flying, a technique whereby several satellites fly components of a much heavier and complex instrument in a tightly controlled configuration.
CNES is collaborating with other space agencies in a number of projects. Orbital telescopes such as INTEGRAL
INTEGRAL
The European Space Agency's INTErnational Gamma-Ray Astrophysics Laboratory is an operational Earth satellite, launched in 2002 for detecting some of the most energetic radiation that comes from space. It is the most sensitive gamma ray observatory ever launched.INTEGRAL is an ESA mission in...
, XMM-Newton
XMM-Newton
The XMM-Newton is an orbiting X-ray observatory launched by ESA in December 1999 on a Ariane 5 rocket...
and COROT
Corot
Corot may refer to:* Jean-Baptiste-Camille Corot, French landscape painter * COROT, a space mission with the dual aims of finding extrasolar planets and performing asteroseismology* COROT-7, a dwarf star in the Monoceros constellation...
, and space probes like Mars Express
Mars Express
Mars Express is a space exploration mission being conducted by the European Space Agency . The Mars Express mission is exploring the planet Mars, and is the first planetary mission attempted by the agency. "Express" originally referred to the speed and efficiency with which the spacecraft was...
, Venus Express
Venus Express
Venus Express is the first Venus exploration mission of the European Space Agency. Launched in November 2005, it arrived at Venus in April 2006 and has been continuously sending back science data from its polar orbit around Venus. Equipped with seven science instruments, the main objective of the...
, Cassini-Huygens
Cassini-Huygens
Cassini–Huygens is a joint NASA/ESA/ASI spacecraft mission studying the planet Saturn and its many natural satellites since 2004. Launched in 1997 after nearly two decades of gestation, it includes a Saturn orbiter and an atmospheric probe/lander for the moon Titan, although it has also returned...
and Rosetta
Rosetta (spacecraft)
Rosetta is a robotic spacecraft of the European Space Agency on a mission to study the comet 67P/Churyumov–Gerasimenko. Rosetta consists of two main elements: the Rosetta space probe and the Philae lander. The spacecraft was launched on 2 March 2004 on an Ariane 5 rocket and will reach the comet by...
, operated by the European space agency are revolutionizing our knowledge of the Universe
Universe
The Universe is commonly defined as the totality of everything that exists, including all matter and energy, the planets, stars, galaxies, and the contents of intergalactic space. Definitions and usage vary and similar terms include the cosmos, the world and nature...
and our Solar System
Solar System
The Solar System consists of the Sun and the astronomical objects gravitationally bound in orbit around it, all of which formed from the collapse of a giant molecular cloud approximately 4.6 billion years ago. The vast majority of the system's mass is in the Sun...
. Recent satellites such as Demeter
Demeter (satellite)
DEMETER is a French micro-satellite operated by CNES devoted to the investigation of the ionospheric disturbances due to seismic and volcanic activity. It was launched on June 29, 2004 on a quasi Sun-synchronous circular orbit with an inclination of about 98.23° and an altitude of about 710 km...
(earthquakes). Joint missions with NASA
NASA
The National Aeronautics and Space Administration is the agency of the United States government that is responsible for the nation's civilian space program and for aeronautics and aerospace research...
result in PARASOL and CALIPSO
CALIPSO
CALIPSO is a joint NASA and CNES environmental satellite, built in the Cannes Mandelieu Space Center, which was launched atop a Delta II rocket on April 28, 2006. Its name stands for Cloud-Aerosol Lidar and Infrared Pathfinder Satellite Observations...
(radiation budget) satellites. Megha-Tropiques Mission
Megha-Tropiques Mission
Megha-Tropiques is a satellite mission to study the water cycle in the tropical atmosphere in the context of climate change A collaborative effort between Indian Space Research Organisation and French Centre National d’Etudes Spatiales , Megha-Tropiques was successfully deployed into orbit by...
is a planned collaborative mission with the Indian Space Agency (ISRO) designed to study the water cycle and radiation dynamics, and assist observation from other satellite platforms. CNES plays a major role in the construction and operation of the Soil Moisture and Ocean Salinity satellite
Soil Moisture and Ocean Salinity satellite
The Soil Moisture and Ocean Salinity Satellite is a part of ESA's Living Planet Programme intended to provide new insights into Earth's water cycle and climate...
.

In December 2006, CNES announced that it would publish its UFO archive online by late January or mid-February. Most of the 6,000 reports have been filed by the public and airline professionals. Jacques Arnould, an official for the French Space Agency, said that the data had accumulated over a 30 year period and that they were often reported to the Gendarmerie
Gendarmerie
A gendarmerie or gendarmery is a military force charged with police duties among civilian populations. Members of such a force are typically called "gendarmes". The Shorter Oxford English Dictionary describes a gendarme as "a soldier who is employed on police duties" and a "gendarmery, -erie" as...
.

In the last 2 decades of the 20th century, France was the only country with officially paid UFO investigators, employed by CNES's UFO section GEPAN, later known as SEPRA and now as GEIPAN
GEIPAN
GEIPAN , formerly known as GEPAN and SEPRA , is a unit of the French Space Agency CNES whose brief is to investigate unidentified aerospace phenomena and make its findings available to the public....
.

On March 22, 2007, CNES released its UFO files to the public through its website. The 100,000 pages of witness testimony, photographs, film footage and audiotapes are an accumulation of over than 1,600 sightings since 1954 and will include all future UFO reports obtained by the agency, through its GEIPAN
GEIPAN
GEIPAN , formerly known as GEPAN and SEPRA , is a unit of the French Space Agency CNES whose brief is to investigate unidentified aerospace phenomena and make its findings available to the public....
unit.

The French skeptics have heavily criticized the quality of the work done by the GEPAN, and show a lot of flaws in their methodologies. See (in French): 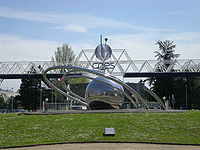