A directed graph
Graph (mathematics)
In mathematics, a graph is an abstract representation of a set of objects where some pairs of the objects are connected by links. The interconnected objects are represented by mathematical abstractions called vertices, and the links that connect some pairs of vertices are called edges...
or digraph is a pair

It differs from an ordinary or undirected graph, in that the latter is defined in terms of unordered pairs of vertices, which are usually called edges.

Sometimes a digraph is called a simple digraph to distinguish it from a directed multigraph, in which the arcs constitute a multiset
Multiset
In mathematics, the notion of multiset is a generalization of the notion of set in which members are allowed to appear more than once...
, rather than a set, of ordered pairs of vertices. Also, in a simple digraph loops are disallowed. (A loop is an arc that pairs a vertex to itself.) On the other hand, some texts allow loops, multiple arcs, or both in a digraph.

is considered to be directed from

is called the head and

is called the tail of the arc;

is said to be a direct successor of

is said to be a direct predecessor of

. If a path
Path (graph theory)
In graph theory, a path in a graph is a sequence of vertices such that from each of its vertices there is an edge to the next vertex in the sequence. A path may be infinite, but a finite path always has a first vertex, called its start vertex, and a last vertex, called its end vertex. Both of them...
made up of one or more successive arcs leads from

is said to be a successor of

is said to be a predecessor of

. The arc is called the arc inverted.

are vertices, a simple directed graph allows both

as edges, while only one is permitted in an oriented graph.

The adjacency matrix
Adjacency matrix
In mathematics and computer science, an adjacency matrix is a means of representing which vertices of a graph are adjacent to which other vertices...
of a digraph (with loops and multiple arcs) is the integer-valued matrix
Matrix (mathematics)
In mathematics, a matrix is a rectangular array of numbers, symbols, or expressions. The individual items in a matrix are called its elements or entries. An example of a matrix with six elements isMatrices of the same size can be added or subtracted element by element...
with rows and columns corresponding to the digraph nodes, where a nondiagonal entry

is the number of arcs from node i to node j, and the diagonal entry

is the number of loops at node i. The adjacency matrix for a digraph is unique up to the permutations of rows and columns.

The indegree is denoted

is called a source, as it is the origin of each of its incident edges. Similarly, a vertex with

is called a sink.

The degree sum formula states that, for a directed graph,

If for every node ,

, the graph is called a balanced digraph. 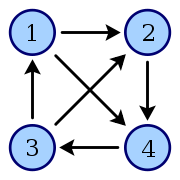 A tournament  is an oriented graph obtained by choosing a direction for each edge in an undirected complete graph
Complete graph
In the mathematical field of graph theory, a complete graph is a simple undirected graph in which every pair of distinct vertices is connected by a unique edge.-Properties:...
.

In the theory of Lie group
Lie group
In mathematics, a Lie group is a group which is also a differentiable manifold, with the property that the group operations are compatible with the smooth structure...
s, a quiver
Quiver (mathematics)
In mathematics, a quiver is a directed graph where loops and multiple arrows between two vertices are allowed, i.e. a multidigraph. They are commonly used in representation theory: a representation, V, of a quiver assigns a vector space V to each vertex x of the quiver and a linear map V to each...
Q is a directed graph serving as the domain of, and thus characterizing the shape of, a representation V defined as a functor
Functor
In category theory, a branch of mathematics, a functor is a special type of mapping between categories. Functors can be thought of as homomorphisms between categories, or morphisms when in the category of small categories....
, specifically an object of the functor category
Functor category
In category theory, a branch of mathematics, the functors between two given categories form a category, where the objects are the functors and the morphisms are natural transformations between the functors...
FinVctKF(Q) where F(Q) is the free category on Q consisting of paths in Q and FinVctK is the category of finite dimensional vector space
Vector space
A vector space is a mathematical structure formed by a collection of vectors: objects that may be added together and multiplied by numbers, called scalars in this context. Scalars are often taken to be real numbers, but one may also consider vector spaces with scalar multiplication by complex...
s over a field K. Representations of a quiver label its vertices with vector spaces and its edges (and hence paths) compatibly with linear transformations between them, and transform via natural transformations.
The source of this article is wikipedia, the free encyclopedia.  The text of this article is licensed under the GFDL.