A paten, or diskos, is a small plate, usually made of silver or gold, used to hold Eucharist
Eucharist
The Eucharist , also called Holy Communion, the Sacrament of the Altar, the Blessed Sacrament, the Lord's Supper, and other names, is a Christian sacrament or ordinance...
ic bread which is to be consecrated. It is generally used during the service itself, while the reserved hosts
Reserved sacrament
During the Liturgy of the Eucharist, the second part of the Mass, the elements of bread and wine are considered, in some branches of Christian practice, to have been transubstantiated into the veritable Body and Blood of Jesus Christ...
are stored in the Tabernacle
Church tabernacle
A tabernacle is the fixed, locked box in which, in some Christian churches, the Eucharist is "reserved" . A less obvious container, set into the wall, is called an aumbry....
in a ciborium.

Within the Latin-Rite, the paten is typically either a simple saucer-like plate or a low bowl. A smaller style paten will often have a depression that allows it to securely sit on top of the chalice
Chalice (cup)
A chalice is a goblet or footed cup intended to hold a drink. In general religious terms, it is intended for drinking during a ceremony.-Christian:...
.

In more traditional denominations or parishes, altar servers may also use a small paten, usually attached to a short pole, which is placed under the chin of those receiving the Eucharist
Eucharist
The Eucharist , also called Holy Communion, the Sacrament of the Altar, the Blessed Sacrament, the Lord's Supper, and other names, is a Christian sacrament or ordinance...
on the tongue; thus if the host accidentally falls, it would land on the paten rather than the floor.

"[Like the chalice, the paten]...should be made from solid materials which are considered suitable in each region. The conference of bishops will be the judge in this matter. Materials which do not break or deteriorate easily are to be given preference."

It is clear that patens and chalices do not have to be made of precious metal. Although this does not appear to rule out a material such as crystal, it would be considered unsuitable, whereas something such as ebony would be thought appropriate, and the use of a paten large enough for all is commended.

It is also used among Lutherans.

In the Eastern Orthodox
Eastern Orthodox Church
The Orthodox Church, officially called the Orthodox Catholic Church and commonly referred to as the Eastern Orthodox Church, is the second largest Christian denomination in the world, with an estimated 300 million adherents mainly in the countries of Belarus, Bulgaria, Cyprus, Georgia, Greece,...
and Greek-Catholic Churches, the Paten is called a diskos and is elevated by a stand (or "foot") permanently attached underneath. The diskos is usually more ornate than its Latin-Rite counterpart, and must always be made of gold or at least be gold-plated. The diskos may be engraved with an icon
Icon
An icon is a religious work of art, most commonly a painting, from Eastern Christianity and in certain Eastern Catholic churches...
of Jesus
Jesus
Jesus of Nazareth , commonly referred to as Jesus Christ or simply as Jesus or Christ, is the central figure of Christianity...
Christ
Christ
Christ is the English term for the Greek meaning "the anointed one". It is a translation of the Hebrew , usually transliterated into English as Messiah or Mashiach...
, the Nativity of Christ, a cross
Cross
A cross is a geometrical figure consisting of two lines or bars perpendicular to each other, dividing one or two of the lines in half. The lines usually run vertically and horizontally; if they run obliquely, the design is technically termed a saltire, although the arms of a saltire need not meet...
, or more frequently, an icon of the Theotokos
Theotokos
Theotokos is the Greek title of Mary, the mother of Jesus used especially in the Eastern Orthodox, Oriental Orthodox, and Eastern Catholic Churches. Its literal English translations include God-bearer and the one who gives birth to God. Less literal translations include Mother of God...
.

For Christians of the East the diskos symbolises the Virgin Mary, who received Christ into her womb, and gave him birth; and also the Tomb of Christ which received his body after the Crucifixion, and from which he resurrected.

During the Divine Liturgy
Divine Liturgy
Divine Liturgy is the common term for the Eucharistic service of the Byzantine tradition of Christian liturgy. As such, it is used in the Eastern Orthodox and Eastern Catholic Churches. Armenian Christians, both of the Armenian Apostolic Church and of the Armenian Catholic Church, use the same term...
it is not only the Lamb (Host) that is placed on the diskos, but also particles to commemorate the Theotokos, the Saints, the living and the departed. Thus, on the diskos is represented the entire Church: the Church Militant and the Church Triumphant, arrayed around Christ. At the Great Entrance the deacon carries the Diskos, holding the foot of the diskos at his forehead. He then kneels at the side of the Holy Table
Altar
An altar is any structure upon which offerings such as sacrifices are made for religious purposes. Altars are usually found at shrines, and they can be located in temples, churches and other places of worship...
, and the priest takes the diskos from him and places it on the Antimension
Antimension
The Antimins, , is one of the most important furnishings of the altar in many Eastern Christian liturgical traditions. It is a rectangular piece of cloth, either linen or silk, typically decorated with representations of the Descent of Christ from the Cross, the four Evangelists, and inscriptions...
. During the Anaphora
Anaphora (liturgy)
The Anaphora is the most solemn part of the Divine liturgy, Mass, or other Christian Communion rite where the offerings of bread and wine are consecrated as the body and blood of Christ. This is the usual name for this part of the Liturgy in Eastern Christianity, but it is more often called the...
, only the Lamb is consecrated.

At Holy Communion, the clergy partake of their portions of the Lamb directly from the diskos, but for the Communion of the faithful, the remainder of the Lamb is cut into small portions and placed in the chalice, from which the priest distributes Communion using the spoon. After Communion, the Deacon holds the diskos above the holy chalice and recites hymns of the Resurrection. Then he wipes the remaining particles (for the saints, living and departed) into the chalices saying the words:

"Wash away, O Lord, the sins of all those here commemorated, by Thy precious Blood, through the prayers of all Thy saints."

Sometimes, when a bishop celebrates the Liturgy, a smaller diskos is prepared for him with a small prosphoron
Prosphora
A prosphoron is a small loaf of leavened bread used in Orthodox Christian and Greek Catholic liturgies. The plural form is prosphora...
from which he takes particles to commemorate the living and the departed before the Great Entrance.

During the Consecration of a Church, a diskos is used to hold the relics of the saints which will be sealed in the Holy Table and antimension by the bishop.

When a priest is ordained
Ordination
In general religious use, ordination is the process by which individuals are consecrated, that is, set apart as clergy to perform various religious rites and ceremonies. The process and ceremonies of ordination itself varies by religion and denomination. One who is in preparation for, or who is...
, a portion of the Lamb will be placed on a small diskos and given to him, as a sign of the Sacred Mysteries
Sacrament
A sacrament is a sacred rite recognized as of particular importance and significance. There are various views on the existence and meaning of such rites.-General definitions and terms:...
which are being entrusted to his care.

In the Russian tradition, there is a special service of blessing used to sanctify a diskos before its first use at Liturgy. The diskos may be blessed separately or together in a set with the other sacred vessels. The blessing is normally done immediately before beginning of the Liturgy of Preparation, after which the priest carries the diskos into the danctuary and begins the service, using the newly-blessed vessel in that Liturgy.

Up until the first time a diskos is used in the Divine Liturgy it is considered to be an ordinary vessel, and may be touched by anyone. However, after having been used in the Divine Liturgy, a diskos may be touched only by a deacon, priest or bishop. A subdeacon
Subdeacon
-Subdeacons in the Orthodox Church:A subdeacon or hypodeacon is the highest of the minor orders of clergy in the Orthodox Church. This order is higher than the reader and lower than the deacon.-Canonical Discipline:...
may touch the sacred vessels, but only if they are securely wrapped in cloth.

When not in use, the chalice, diskos, and all the sacred vessels should remain on the Table of Oblation
Prothesis (altar)
The Prothesis is the place in the sanctuary in which the Liturgy of Preparation takes place in the Eastern Orthodox and Greek-Catholic Churches....
(prothesis), wrapped in their cloth bags—either sitting on top and covered with a cloth, or stored securely in a cabinet built into the prothesis.

In the usage of the Coptic Orthodox Church, the diskos usually has a flat bottom with no foot. Additionally, it has a raised edge, forming a relatively high rim, preventing particles of the offered elements from falling to the floor. 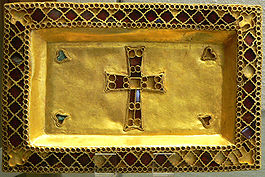