Pastrami (Romanian
Romanian language
Romanian Romanian Romanian (or Daco-Romanian; obsolete spellings Rumanian, Roumanian; self-designation: română, limba română ("the Romanian language") or românește (lit. "in Romanian") is a Romance language spoken by around 24 to 28 million people, primarily in Romania and Moldova...
: pastramă, Yiddish: פּאַסטראָמע pastróme), is a popular delicatessen
Delicatessen
Delicatessen is a term meaning "delicacies" or "fine foods". The word entered English via German,with the old German spelling , plural of Delikatesse "delicacy", ultimately from Latin delicatus....
meat usually made from beef and, traditionally in Romania, also from pork
Pork
Pork is the culinary name for meat from the domestic pig , which is eaten in many countries. It is one of the most commonly consumed meats worldwide, with evidence of pig husbandry dating back to 5000 BC....
and mutton. In Israel, "Pastrama" is the term used for sliced chicken and turkey. Like corned beef
Corned beef
Corned beef is a type of salt-cured beef products present in many beef-eating cultures. The English term is used interchangeably in modernity to refer to three distinct types of cured beef:...
, pastrami was originally created as a way to preserve meat before modern refrigeration
Refrigeration
Refrigeration is a process in which work is done to move heat from one location to another. This work is traditionally done by mechanical work, but can also be done by magnetism, laser or other means...
. For pastrami, the raw meat is brine
Brine
Brine is water, saturated or nearly saturated with salt .Brine is used to preserve vegetables, fruit, fish, and meat, in a process known as brining . Brine is also commonly used to age Halloumi and Feta cheeses, or for pickling foodstuffs, as a means of preserving them...
d, partly dried, seasoned with various herbs and spices, then smoked and steamed. In the United States, although beef navels are the traditional cut of meat for making pastrami, it is now common to see pastrami made from beef brisket
Brisket
Brisket is a cut of meat from the breast or lower chest of beef or veal. The beef brisket is one of the eight beef primal cuts. The brisket muscles include the superficial and deep pectorals. As cattle do not have collar bones, these muscles support about 60% of the body weight of standing/moving...
, beef round and turkey
Turkey (bird)
A turkey is a large bird in the genus Meleagris. One species, Meleagris gallopavo, commonly known as the Wild Turkey, is native to the forests of North America. The domestic turkey is a descendant of this species...
.

Both the dish and the word pastrami originate from the Romanian delicacy pastramă, from which the Yiddish language borrowed it.

According to Romanian sources, the word pastramă itself comes from the Turkish word pastırma
Pastirma
Pastirma or bastirma is a highly seasoned, air-dried cured beef in the cuisines of the former Ottoman countries.-Etymology:The name bastirma is from . bastırma is the gerund of the verb bastırmak , which means "to depress, restrain"...
(pressed meat), a similar but different specialty (air-dried, unsmoked cured meat).

According to other sources, the Romanian term is itself etymologically rooted in the Romanian a păstra, which means "to keep" or "to preserve".

The Romanian specialty was introduced to the United States in a wave of Romanian Jewish
History of the Jews in Romania
The history of Jews in Romania concerns the Jews of Romania and of Romanian origins, from their first mention on what is nowadays Romanian territory....
immigration from Bessarabia
Bessarabia
Bessarabia is a historical term for the geographic region in Eastern Europe bounded by the Dniester River on the east and the Prut River on the west....
and Romania
Romania
Romania is a country located at the crossroads of Central and Southeastern Europe, on the Lower Danube, within and outside the Carpathian arch, bordering on the Black Sea...
in the second half of the 19th century, via the . Early references in English used the spelling "pastrama", closer to the Romanian original. The modified "pastrami" spelling likely was introduced to sound related to the Italian salami
Salami
Salami is cured sausage, fermented and air-dried meat, originating from one of a variety of animals. Historically, salami has been popular among Southern European peasants because it can be stored at room temperature for periods of up to 10 years, supplementing a possibly meager or inconsistent...
.

Although New York's Sussman Volk is generally credited with producing the first pastrami sandwich in 1887, that claim is disputed by the founders of Katz's Deli
Katz's Deli
Katz's Delicatessen, also known as simply Katz's of New York City, is a kosher-style delicatessen restaurant located at 205 E...
in New York, which was founded in 1888. Volk, a kosher butcher, claimed he got the recipe from a Romanian friend in exchange for storing the friend's luggage while the friend returned to Romania. According to his descendant, Patricia Volk, Volk prepared pastrami according to the recipe and served it on sandwiches out of his butcher shop. The sandwich was so popular that Volk converted the butcher shop into a restaurant to sell pastrami sandwiches.

Romanian Jews immigrated to New York as early as 1872. Among Jewish Romanians, goose
Goose
The word goose is the English name for a group of waterfowl, belonging to the family Anatidae. This family also includes swans, most of which are larger than true geese, and ducks, which are smaller....
breasts were commonly made into pastrami because they were inexpensive. Beef navels were cheaper than goose meat in America, so the Romanian Jews in America adapted their recipe and began to make the cheaper beef pastrami.

Making foods to sell out of push carts in the Lower East Side
Lower East Side
The Lower East Side, LES, is a neighborhood in the southeastern part of the New York City borough of Manhattan. It is roughly bounded by Allen Street, East Houston Street, Essex Street, Canal Street, Eldridge Street, East Broadway, and Grand Street....
of New York was one of the most popular occupations for immigrant Jews in the latter half of the 19th century. Because sandwiches were a hugely popular foodstuff in New York, it is possible Romanian Jewish immigrants were making and selling pastrami sandwiches from push carts on the streets of New York at least a decade before Sussman Volk converted his butcher shop into a restaurant.

Traditional New York pastrami is made from the navel end of the brisket
Brisket
Brisket is a cut of meat from the breast or lower chest of beef or veal. The beef brisket is one of the eight beef primal cuts. The brisket muscles include the superficial and deep pectorals. As cattle do not have collar bones, these muscles support about 60% of the body weight of standing/moving...
. It is cured in brine, coated with a mix of spices such as garlic
Garlic
Allium sativum, commonly known as garlic, is a species in the onion genus, Allium. Its close relatives include the onion, shallot, leek, chive, and rakkyo. Dating back over 6,000 years, garlic is native to central Asia, and has long been a staple in the Mediterranean region, as well as a frequent...
, coriander
Coriander
Coriander is an annual herb in the family Apiaceae. Coriander is native to southern Europe and North Africa to southwestern Asia. It is a soft, hairless plant growing to tall. The leaves are variable in shape, broadly lobed at the base of the plant, and slender and feathery higher on the...
, black pepper
Black pepper
Black pepper is a flowering vine in the family Piperaceae, cultivated for its fruit, which is usually dried and used as a spice and seasoning. The fruit, known as a peppercorn when dried, is approximately in diameter, dark red when fully mature, and, like all drupes, contains a single seed...
, paprika
Paprika
Paprika is a spice made from the grinding of dried fruits of Capsicum annuum . In many European languages, the word paprika refers to bell peppers themselves. The seasoning is used in many cuisines to add color and flavor to dishes. Paprika can range from mild to hot...
, cloves, allspice
Allspice
Allspice, also called Jamaica pepper, pepper, myrtle pepper, pimenta, or newspice, is a spice that is the dried unripe fruit of Pimenta dioica , a mid-canopy tree native to the Greater Antilles, southern Mexico, and Central America, now cultivated in many warm parts of the world...
, and mustard seed
Mustard seed
Mustard seeds are the small round seeds of various mustard plants. The seeds are usually about 1 or 2 mm in diameter. Mustard seeds may be colored from yellowish white to black. They are important spices in many regional foods. The seeds can come from three different plants: black mustard , brown...
, and then smoked. Finally, the meat is steamed until the connective tissues within the meat break down into gelatin.
In North America, pastrami is typically sliced and served generously hot on rye bread
Rye bread
Rye bread is a type of bread made with various percentages of flour from rye grain. It can be light or dark in color, depending on the type of flour used and the addition of coloring agents, and is typically denser than bread made from wheat flour...
, a classic New York deli
Delicatessen
Delicatessen is a term meaning "delicacies" or "fine foods". The word entered English via German,with the old German spelling , plural of Delikatesse "delicacy", ultimately from Latin delicatus....
sandwich (pastrami on rye), sometimes accompanied by coleslaw
Coleslaw
Coleslaw, sometimes simply called slaw in some American dialects, is a salad consisting primarily of shredded raw cabbage. It may also include shredded carrots and other ingredients such as fruits and vegetables, apples, onions, green onions, peppers and various spices.-History:The term "coleslaw"...
and Russian dressing
Russian dressing
Russian dressing is a salad dressing invented in the United States in the late 19th century or early 20th century. Typically piquant, it is today characteristically made of a blend of mayonnaise and ketchup complemented with such additional ingredients as horseradish, pimentos, chives and...
. Pastrami and coleslaw are also combined in a Rachel sandwich, a variation of the popular Reuben sandwich
Reuben sandwich
The Reuben sandwich is a hot sandwich of layered meat, sauerkraut and Swiss cheese, with a dressing. These are grilled between slices of rye bread. The meat is either corned beef or pastrami, and the dressing is either Russian or Thousand Island dressing...
that traditionally uses corned beef and sauerkraut
Sauerkraut
Sauerkraut , directly translated from German: "sour cabbage", is finely shredded cabbage that has been fermented by various lactic acid bacteria, including Leuconostoc, Lactobacillus, and Pediococcus. It has a long shelf-life and a distinctive sour flavor, both of which result from the lactic acid...
.

At fast food stands in Los Angeles, pastrami is typically served hot on a French roll. Typically, the meat is served sliced very thin with some of the brine wetting the meat. Traditional accompaniments in Southern California include yellow mustard and pickles. Also popular in Southern California is a hamburger topped with pastrami, lettuce, tomato, onions, mustard, ketchup, and thousand island dressing, known as the Colossal Burger. Classic pastrami sandwiches are usually composed of hot pastrami right out of the steamer, sliced and layered on double-baked Jewish-style rye bread. 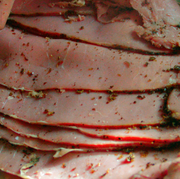 Greek immigrants to Salt Lake City in the early 1960s introduced a hamburger topped with pastrami and a special sauce. The pastrami burger has remained a staple of local burger chains in Utah; the most famous are served at Crown Burger.

In New York City, the delicatessen Barney Greengrass
Barney Greengrass
Barney Greengrass is a restaurant and appetizing store on the Upper West Side of Manhattan that was started in 1908. They specialize in sturgeon, Nova Scotia salmon, and whitefish. They were the winner of the 2006 James Beard Foundation Award for Excellence....
sells "pastrami salmon," which is essentially a piece of salmon coated in cracked peppercorns and smoked.
The source of this article is wikipedia, the free encyclopedia.  The text of this article is licensed under the GFDL.