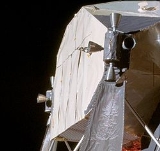 Encyclopedia
A reaction control system (RCS) is a subsystem of a spacecraft
Spacecraft
A spacecraft or spaceship is a craft or machine designed for spaceflight. Spacecraft are used for a variety of purposes, including communications, earth observation, meteorology, navigation, planetary exploration and transportation of humans and cargo....
whose purpose is attitude control and steering
Steering
Steering is the term applied to the collection of components, linkages, etc. which will allow a vessel or vehicle to follow the desired course...
by the use of thrusters
Spacecraft propulsion
Spacecraft propulsion is any method used to accelerate spacecraft and artificial satellites. There are many different methods. Each method has drawbacks and advantages, and spacecraft propulsion is an active area of research. However, most spacecraft today are propelled by forcing a gas from the...
. An RCS system is capable of providing small amounts of thrust
Thrust
Thrust is a reaction force described quantitatively by Newton's second and third laws. When a system expels or accelerates mass in one direction the accelerated mass will cause a force of equal magnitude but opposite direction on that system....
in any desired direction or combination of directions. An RCS is also capable of providing torque
Torque
Torque, moment or moment of force , is the tendency of a force to rotate an object about an axis, fulcrum, or pivot. Just as a force is a push or a pull, a torque can be thought of as a twist....
to allow control of rotation
Rotation
A rotation is a circular movement of an object around a center of rotation. A three-dimensional object rotates always around an imaginary line called a rotation axis. If the axis is within the body, and passes through its center of mass the body is said to rotate upon itself, or spin. A rotation...
(roll, pitch, and yaw
Aircraft principal axes
An aircraft in flight is free to rotate in three dimensions: pitch, nose up or down about an axis running from wing to wing), yaw, nose left or right about an axis running up and down; and roll, rotation about an axis running from nose to tail. The axes are alternatively designated as lateral,...
). This is in contrast to a spacecraft's main engine, which is only capable of providing thrust in one direction, but is much more powerful.


Because spacecraft only contain a finite amount of fuel
Fuel
Fuel is any material that stores energy that can later be extracted to perform mechanical work in a controlled manner. Most fuels used by humans undergo combustion, a redox reaction in which a combustible substance releases energy after it ignites and reacts with the oxygen in the air...
and there is little chance to refill them, some alternative reaction control systems have been developed so that fuel can be conserved. For stationkeeping, some spacecraft (particularly those in geosynchronous orbit
Geosynchronous orbit
A geosynchronous orbit is an orbit around the Earth with an orbital period that matches the Earth's sidereal rotation period...
) use high-specific impulse
Specific impulse
Specific impulse is a way to describe the efficiency of rocket and jet engines. It represents the derivative of the impulse with respect to amount of propellant used, i.e., the thrust divided by the amount of propellant used per unit time. If the "amount" of propellant is given in terms of mass ,...
engines such as arcjets, ion thruster
Ion thruster
An ion thruster is a form of electric propulsion used for spacecraft propulsion that creates thrust by accelerating ions. Ion thrusters are categorized by how they accelerate the ions, using either electrostatic or electromagnetic force. Electrostatic ion thrusters use the Coulomb force and...
s, or Hall effect thruster
Hall effect thruster
In spacecraft propulsion, a Hall thruster is a type of ion thruster in which the propellant is accelerated by an electric field. Hall thrusters trap electrons in a magnetic field and then use the electrons to ionize propellant, efficiently accelerate the ions to produce thrust, and neutralize the...
s. To control orientation, a few spacecraft use momentum wheel
Momentum wheel
A reaction wheel is a type of flywheel used primarily by spacecraft for attitude control without using fuel for rockets or other reaction devices....
s which spin to control rotational rates on the vehicle.


Location of thrusters on space capsules 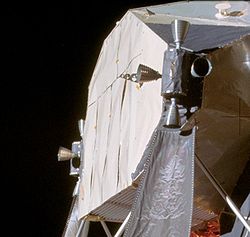 Two Apollo spacecraft
Apollo spacecraft
The Apollo spacecraft was composed of five combined parts designed to accomplish the American Apollo program's goal of landing astronauts on the Moon by the end of the 1960s and returning them safely to Earth...
(the Service Module and the Lunar Module) had translation
Translation (physics)
In physics, translation is movement that changes the position of an object, as opposed to rotation. For example, according to Whittaker:...
thrusters grouped into external blocks of four, which served to translate and orient the spacecraft. Other designs used separate sets of thrusters for these two tasks. The Apollo thrusters were configured to allow "coupled" RCS firings (where thrusters on opposite sides of the spacecraft fired together), which allowed adjusting the vehicle attitude without affecting the critical accuracy of their orbital, trans-lunar and trans-earth trajectories.

The Mercury
Project Mercury
In January 1960 NASA awarded Western Electric Company a contract for the Mercury tracking network. The value of the contract was over $33 million. Also in January, McDonnell delivered the first production-type Mercury spacecraft, less than a year after award of the formal contract. On February 12,...
and Gemini
Project Gemini
Project Gemini was the second human spaceflight program of NASA, the civilian space agency of the United States government. Project Gemini was conducted between projects Mercury and Apollo, with ten manned flights occurring in 1965 and 1966....
spacecraft each had groupings of two nozzles inserted into their forward compartments, with slots cut out from which the exhaust could escape. These thrusters were used for orientation, not translation. (Indeed, the Mercury spacecraft had no separate capacity for translation at all.) Similarly, the command modules of both the Apollo and Soyuz spacecraft have their re-entry RCS thrusters ungrouped.

Gemini, due to its relatively low mass, was able to change its orbit using its thrusters, and did not require an engine (unlike its heavier descendants).

A pair of translation thrusters are located at the rear of both the Gemini and Soyuz spacecraft; the counter-acting thrusters are similarly paired in the middle of each spacecraft (near the center of mass) pointing outwards and forward. These act in pairs to prevent the spacecraft from rotating. The thrusters for the lateral directions are mounted close to the center of mass of each of these spacecraft as well, but Gemini has only one engine for each of the directions while Soyuz again uses a pair.

None of these engines is intended for orientation. For that purpose, both Gemini and Soyuz have engines at the extreme rear of the spacecraft. Here Soyuz uses engines only one-tenth the power of the others.

Finally, Soyuz has a thruster at the rear of the spacecraft that points parallel to each solar panel. This thruster is used for orientation, but has the unique application of keeping the spacecraft's solar panels pointing towards the sun. Without this thruster, a computer system would have to keep the panels properly aligned, wasting electricity. The spin is dampened by a counterpart thruster on the other side.


Location of thrusters on spaceplanes 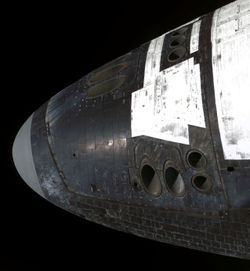 The suborbital X-15 and a companion training aero-spacecraft, the NF-104 AST
Lockheed NF-104A
The Lockheed NF-104A was an American mixed power, high-performance, supersonic aerospace trainer that served as a low cost astronaut training vehicle for the X-15 and projected X-20 Dyna-Soar programs....
, both intended to travel to an altitude that rendered their aerodynamic control surfaces unusable, established a convention for locations for thrusters on winged vehicles not intended to dock in space; that is, those that only have attitude control thrusters. Those for pitch and yaw are located in the nose, forward of the cockpit, and replace a standard radar system. Those for roll are located at the wingtips. The X-20, which would have gone into orbit, continued this pattern.

Unlike these, the Space Shuttle
Space Shuttle
The Space Shuttle was a manned orbital rocket and spacecraft system operated by NASA on 135 missions from 1981 to 2011. The system combined rocket launch, orbital spacecraft, and re-entry spaceplane with modular add-ons...
has many more thrusters, as it is required to carry out docking maneuvers in orbit. Shuttle thrusters are grouped in the nose of the vehicle and on each of the two aft Orbital Maneuvering System pods. No nozzles interrupt the heat shield on the underside of the craft, instead, the nose RCS nozzles which control positive pitch are mounted on the side of the vehicle, and are canted downward. The downward-facing negative pitch thrusters are located in the OMS pods mounted in the tail/afterbody.