Encyclopedia
Park Kultury is a Moscow Metro
Moscow Metro
The Moscow Metro is a rapid transit system serving Moscow and the neighbouring town of Krasnogorsk. Opened in 1935 with one line and 13 stations, it was the first underground railway system in the Soviet Union. As of 2011, the Moscow Metro has 182 stations and its route length is . The system is...
station in the Khamovniki District, Central Administrative Okrug, Moscow
Moscow
Moscow is the capital, the most populous city, and the most populous federal subject of Russia. The city is a major political, economic, cultural, scientific, religious, financial, educational, and transportation centre of Russia and the continent...
. It is on the Sokolnicheskaya Line
Sokolnicheskaya Line
The Sokolnicheskaya Line is the first line of the Moscow Metro, dating back to 1935 when the system opened. Presently the line has 19 stations with a total of of track...
, between Frunzenskaya and Kropotkinskaya
Kropotkinskaya
Kropotkinskaya is a station on the Sokolnicheskaya Line of the Moscow Metro. One of the better-known Metro stations, it was designed by Alexey Dushkin and Ya...
stations. Named after the nearby Maxim Gorky Park of Culture and Leisure
Gorky Park (Moscow)
Gorky Central Park of Culture and Leisure is an amusement park in Moscow, named after Maxim Gorky.-History:...
located across the Moskva River
Moskva River
The Moskva River is a river that flows through the Moscow and Smolensk Oblasts in Russia, and is a tributary of the Oka River.-Etymology:...
, the station opened along the first stage of the metro on 15 May 1935.

The construction of the station began in the spring of 1933. From the very start it was clear that construction of this final station would not be an easy task. Being only several hundred metres from the bank of the Moskva River, the soil was particularly damp with the level of subterranean waters being higher than the future ceiling of the station.

Even more important was the fact that the station is situated under the Crimean Square (Krymskaya Ploshchad) of the Sadovoye Koltso's intersection with the southwestern Ostozhenka Street/Komsomolsky Avenue and thus being an important traffic hub.
Before the pit of the station was excavated along its future perimeter, metallic casts reinforced by solid logs with caulked slits between them were forced into the ground, and abyssal water lowering was employed as the pit was slowly excavated to its required depth. All of this was necessary to prevent the flooding of the pit, which would also fraught with subsidence and even destruction of nearby houses. As soon as this was completed a wooden bridge was erected at street level to prevent traffic disruption. Most of the construction was carried out at night. The station was completed in eleven months during which time 100,000 cubic metres of soil was removed from the pit and replaced with 25,000 cubic metres of concrete. 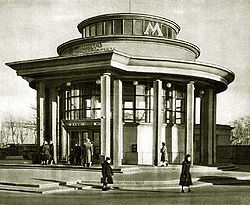 The station is a bilevel pillar-trispan with four footbridges above the platforms. Architects Krutikov and Popov chose a decoration inspired by ancient Greek elements. Along the platform two rows of 22 pilars are faced with Crimean marble Kadykovka and are topped with moulded сapitals. Along the walls a set of dark rose-coloured mosaic pilasters, repeat the step of the pillars (every seven metres) blending very well with the porcelain tiles that the rest of the wall area is faced with. Also, a dark brown mosaic socle runs below the platform level along both walls. A total of 1500 and 200 square metres of marble and porcelain tiles respectively were used in the decorations

The footbridges, which lead to the vestibules, are separately decorated with red metaloplastic tiles and moulded white balustrade with marbled railings. The walls of the corridors leading to the vestbules are reveted with white uralian koelga marble. 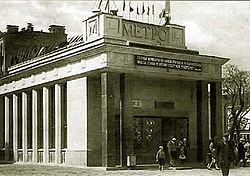 The station originally had two vestibules, one of which, a distinctive rotunda building still stands on the corner between Ostozhenka street and Novokrymskiy side-street. The second vestibule used to stand on the corner of Komsmolskiy Avenue and Sadovoye Koltso. The ticket hall was faced with brown ural ufaley marble and had four welded octagonal columns faced with white koelga marble. The ticket offices themselves were built out of polished oak. This vestibule was pulled down in 1949 when a newer, larger vestibule was erected in its place and the old corridors were integrated into it. The vestibule also offers a transfer to the Koltsevaya Line
Koltsevaya Line
The Koltsevaya Line , , is a railway line of the Moscow Metro. The line was built in 1950-1954 encircling the central Moscow, and became crucial to the transfer patterns of passengers....
which was opened in 1950. 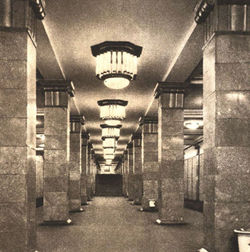 This station is one of the few surviving of the first stage that remained more or less unchanged since opening (compared with Lubyanka
Lubyanka (Metro)
Lubyanka is a station on the Sokolnicheskaya Line of the Moscow Metro, located under Lubyanka Square. It opened in 1935 as part of the first stage of the Metro.-History:...
or Chistiye Prudy), except for resurfacing the platform with granite (instead of original asphalt) and lighting. The latter consisted of very beautiful chandeliers in the central span and semi-circular lamps made of milk-white glass in side naves. However, with the introduction of luminescent lamps, the chandeliers and the lamps in the naves completely removed. However, the new lighting instruments managed to organically fit in with the architectural composition and do not appear out of place like on Kievskaya which had an analogous makeover.

When the station opened in 1935, it was also the terminus of the Frunze Branch of the first stage (and from 1938 - of Kirovsko-Frunzenskaya Line). Although the plans did call for the station to have a four-track reversal siding, this was not finished until 1937, and a temporary piston junction was instead installed before the platform to allow reversal of the trains. The station ceased to be the terminus in 1957 upon the extension of the Frunzenskiy radius southwestward to Sportivnaya
Sportivnaya
Sportivnaya is a Moscow Metro station on the Sokolnicheskaya Line in Moscow, Russia. Named for the nearby Luzhniki sports complex, it opened in 1957. The architects were Nadezhda Bykova, I. Gokhar-Kharmandaryan, Ivan Taranov, and B. Cherepanov. Sportivnaya has white marble pylons with green marble...
.

When the station was opened, it had quite a long name: Tsentralnyi Park Kultury i Otdykha imeni Gorkovo (The Maxim Gorky
Maxim Gorky
Alexei Maximovich Peshkov , primarily known as Maxim Gorky , was a Russian and Soviet author, a founder of the Socialist Realism literary method and a political activist.-Early years:...
Central Park of Culture and Leisure). However, even on schematics it was abbreviated as TsPKiO and only in voice announcements called in the full name. In 1980, with the coming of the Olympic games
Olympic Games
The Olympic Games is a major international event featuring summer and winter sports, in which thousands of athletes participate in a variety of competitions. The Olympic Games have come to be regarded as the world’s foremost sports competition where more than 200 nations participate...
in Moscow, the name was shortened to avoid the would-be lengthy trilingual station callings, although some signs still bear the original long version of the name.

The station is used by 107,700 people daily, mainly passengers changing to and from Park Kultury on the Ring Line
Park Kultury-Koltsevaya
Park Kultury is a Moscow Metro station in the Khamovniki District, Central Administrative Okrug, Moscow. It is on the Koltsevaya Line, between Oktyabrskaya and Kiyevskaya stations. Park Kultury opened on 1 January 1950.-Design:...
, and only 9,650 entering and leaving the Metro system at this station.

On March 29, 2010, the station (along with Lubyanka
Lubyanka (Metro)
Lubyanka is a station on the Sokolnicheskaya Line of the Moscow Metro, located under Lubyanka Square. It opened in 1935 as part of the first stage of the Metro.-History:...
) was subject to a terrorist attack, resulting in 40 casualties
The source of this article is wikipedia, the free encyclopedia.  The text of this article is licensed under the GFDL.