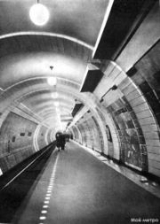 Encyclopedia
Lubyanka is a station on the Sokolnicheskaya Line
Sokolnicheskaya Line
The Sokolnicheskaya Line is the first line of the Moscow Metro, dating back to 1935 when the system opened. Presently the line has 19 stations with a total of of track...
of the Moscow Metro
Moscow Metro
The Moscow Metro is a rapid transit system serving Moscow and the neighbouring town of Krasnogorsk. Opened in 1935 with one line and 13 stations, it was the first underground railway system in the Soviet Union. As of 2011, the Moscow Metro has 182 stations and its route length is . The system is...
, located under Lubyanka Square
Lubyanka Square
Lubyanka Square in Moscow is about north east of Red Square. The name is first mentioned in 1480, when Ivan III settled many Novgorodians in the area. They built the church of St Sophia, modelled after St Sophia Cathedral in Novgorod, and called the area Lubyanka after the Lubyanitsy district of...
. It opened in 1935 as part of the first stage of the Metro.

Construction work on the station began in December 1933, and the engineers were faced with extremely difficult soil conditions from the outset. The area under Lubyanka square is made of Jurassic
Jurassic
The Jurassic is a geologic period and system that extends from about Mya to  Mya, that is, from the end of the Triassic to the beginning of the Cretaceous. The Jurassic constitutes the middle period of the Mesozoic era, also known as the age of reptiles. The start of the period is marked by...
clay
Clay
Clay is a general term including many combinations of one or more clay minerals with traces of metal oxides and organic matter. Geologic clay deposits are mostly composed of phyllosilicate minerals containing variable amounts of water trapped in the mineral structure.- Formation :Clay minerals...
, beneath which are layers of quicksand
Quicksand
Quicksand is a colloid hydrogel consisting of fine granular matter , clay, and water.Water circulation underground can focus in an area with the optimal mixture of fine sands and other materials such as clay. The water moves up and then down slowly in a convection-like manner throughout a column...
and Carboniferous
Carboniferous
The Carboniferous is a geologic period and system that extends from the end of the Devonian Period, about 359.2 ± 2.5 Mya , to the beginning of the Permian Period, about 299.0 ± 0.8 Mya . The name is derived from the Latin word for coal, carbo. Carboniferous means "coal-bearing"...
clay. The Metro station was planned to rest on top of the Carboniferous clay, which was thought to be firm enough to support its weight. It was quickly discovered, however, that the clay was much softer than anticipated due to the proximity of an underground channel of the Neglinnaya River
Neglinnaya River
The Neglinnaya River , also known as Neglimna, Neglinna, Neglinka , is a 7.5-km long underground river in the central part of Moscow and a tributary of the Moskva River. It flows in the tunnels under Samotechnaya Street, Tsvetnoy Boulevard, Neglinnaya Street and Alexander Garden and Zaryadye...
and also tended to swell greatly when exposed to air. This meant that the tunnels had to be built one section at a time, very quickly, in order to allow the concrete
Concrete
Concrete is a composite construction material, composed of cement and other cementitious materials such as fly ash and slag cement, aggregate , water and chemical admixtures.The word concrete comes from the Latin word...
to set before the pressure exerted by the expanding clay increased to the point where the wooden forms could no longer contain it.

Nikolai Ladovsky
Nikolai Ladovsky
Nikolai Alexandrovich Ladovsky was a Russian avant-garde architect and educator, leader of the rationalist movement in 1920s architecture, an approach emphasizing human perception of space and shape...
's initial design had to be significantly modified in order to cope with these problems. In order to minimize the amount of excavation required, the planned full-length central hall was abandoned in favour of a short passage at the end of the station connecting the two platform tubes, similar to many London Underground
London Underground
The London Underground is a rapid transit system serving a large part of Greater London and some parts of Buckinghamshire, Hertfordshire and Essex in England...
stations. This simplified the construction of the station while still allowing the planned hall to be built in the future.

Even after the design change, the station's construction was plagued by difficulties. Quicksand from between the two layers of clay began to seep into the construction site almost immediately, and due to the unexpected softness of the Carboniferous clay the station began to slowly sink. Nevertheless, the builders of the station were able to surmount these problems and Lubyanka was opened as planned on May 15, 1935. The heroic efforts of the Metro builders are memorialized in a sculptural composition in the vestibule on Nikolskaya street.

The construction of the northern half of the central hall was simplified by using the new technique of soil freezing, but this could not be used on the southern half. Workers were forced to go back to the original method of quickly building one tunnel segment at a time before the expansion of the clay could crush them. Once the central hall was finished passages to the platforms were blown through using explosives. In 1972 the station was finally reopened.

The reconstruction of the station was an engineering triumph, but it was much less impressive aesthetically with blocky white marble
Marble
Marble is a metamorphic rock composed of recrystallized carbonate minerals, most commonly calcite or dolomite.Geologists use the term "marble" to refer to metamorphosed limestone; however stonemasons use the term more broadly to encompass unmetamorphosed limestone.Marble is commonly used for...
pylons
Pylon station
The pylon station is a type of deep underground subway station. The basic distinguishing characteristic of the pylon station is the manner of division of the central hall from the station tunnels...
and white tiled walls replacing the strikingly patterned dark marble used in the old station. Though the old section of the central hall still exists, the overall effect has been lost. The architects of the expansion were Nina Aleshina and A.F. Strelkov. In 1975, escalator
Escalator
An escalator is a moving staircase – a conveyor transport device for carrying people between floors of a building. The device consists of a motor-driven chain of individual, linked steps that move up or down on tracks, allowing the step treads to remain horizontal.Escalators are used around the...
s were added in the centre of the platform for the transfer to the new Kuznetsky Most station.

Lubyanka has two vestibules each located at the opposite end of the station. The original one is built into the ground floor of a building on the south side of Lubyanka Square, opposite the infamous KGB headquarters
Lubyanka (KGB)
The Lubyanka is the popular name for the headquarters of the KGB and affiliated prison on Lubyanka Square in Moscow. It is a large building with a facade of yellow brick, designed by Alexander V...
. The later vestibule is connected to a network of underground pathways at the north end of the square. An average of 40,800 passengers enter the station through the vestibules each day, with a much larger number using the transfer.

The station was originally named Dzerzhinskaya after Dzerzhinsky Square, but it was changed on 5 November 1990 after the square's original name, Lubyanka, was restored. There is still a bust of Felix Dzerzhinsky in the station vestibule.

On 29 March 2010 a bomb was reported to have gone off at the Lubyanka station, on the Sokolnicheskaya (Сокольническая), during rush hour, at 7:56 AM local time. Early reports suggest that 40 people have been killed, 14 of whom were in the second train carriage where the explosion is believed to have taken place.