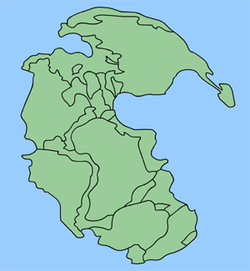 Panthalassa also known as the Panthalassic Ocean, was the vast global ocean
Ocean
An ocean is a major body of saline water, and a principal component of the hydrosphere. Approximately 71% of the Earth's surface is covered by ocean, a continuous body of water that is customarily divided into several principal oceans and smaller seas.More than half of this area is over 3,000...
that surrounded the supercontinent
Supercontinent
In geology, a supercontinent is a landmass comprising more than one continental core, or craton. The assembly of cratons and accreted terranes that form Eurasia qualifies as a supercontinent today.-History:...
Pangaea
Pangaea
Pangaea, Pangæa, or Pangea is hypothesized as a supercontinent that existed during the Paleozoic and Mesozoic eras about 250 million years ago, before the component continents were separated into their current configuration....
, during the late Paleozoic
Paleozoic
The Paleozoic era is the earliest of three geologic eras of the Phanerozoic eon, spanning from roughly...
and the early Mesozoic
Mesozoic
The Mesozoic era is an interval of geological time from about 250 million years ago to about 65 million years ago. It is often referred to as the age of reptiles because reptiles, namely dinosaurs, were the dominant terrestrial and marine vertebrates of the time...
years. It included the Pacific Ocean
Pacific Ocean
The Pacific Ocean is the largest of the Earth's oceanic divisions. It extends from the Arctic in the north to the Southern Ocean in the south, bounded by Asia and Australia in the west, and the Americas in the east.At 165.2 million square kilometres in area, this largest division of the World...
to the west and north and the Tethys Ocean
Tethys Ocean
The Tethys Ocean was an ocean that existed between the continents of Gondwana and Laurasia during the Mesozoic era before the opening of the Indian Ocean.-Modern theory:...
to the southeast. It became the Pacific Ocean, following the closing of the Tethys basin and the breakup of Pangaea, which created the Atlantic
Atlantic Ocean
The Atlantic Ocean is the second-largest of the world's oceanic divisions. With a total area of about , it covers approximately 20% of the Earth's surface and about 26% of its water surface area...
, Arctic
Arctic Ocean
The Arctic Ocean, located in the Northern Hemisphere and mostly in the Arctic north polar region, is the smallest and shallowest of the world's five major oceanic divisions...
, and Indian Ocean
Indian Ocean
The Indian Ocean is the third largest of the world's oceanic divisions, covering approximately 20% of the water on the Earth's surface. It is bounded on the north by the Indian Subcontinent and Arabian Peninsula ; on the west by eastern Africa; on the east by Indochina, the Sunda Islands, and...
basins. The Panthalassic is often called the Paleo-Pacific ("old Pacific") because the Pacific Ocean evolved from it.

In the map
Map
A map is a visual representation of an area—a symbolic depiction highlighting relationships between elements of that space such as objects, regions, and themes....
on the right, the Earth
Earth
Earth is the third planet from the Sun, and the densest and fifth-largest of the eight planets in the Solar System. It is also the largest of the Solar System's four terrestrial planets...
's equator
Equator
An equator is the intersection of a sphere's surface with the plane perpendicular to the sphere's axis of rotation and containing the sphere's center of mass....
was a line that roughly crossed the spot where Spain
Spain
Spain , officially the Kingdom of Spain languages]] under the European Charter for Regional or Minority Languages. In each of these, Spain's official name is as follows:;;;;;;), is a country and member state of the European Union located in southwestern Europe on the Iberian Peninsula...
, Casablanca
Casablanca
Casablanca is a city in western Morocco, located on the Atlantic Ocean. It is the capital of the Grand Casablanca region.Casablanca is Morocco's largest city as well as its chief port. It is also the biggest city in the Maghreb. The 2004 census recorded a population of 2,949,805 in the prefecture...
(Morocco
Morocco
Morocco , officially the Kingdom of Morocco , is a country located in North Africa. It has a population of more than 32 million and an area of 710,850 km², and also primarily administers the disputed region of the Western Sahara...
) and Boston
Boston
Boston is the capital of and largest city in Massachusetts, and is one of the oldest cities in the United States. The largest city in New England, Boston is regarded as the unofficial "Capital of New England" for its economic and cultural impact on the entire New England region. The city proper had...
(U.S.
United States
The United States of America is a federal constitutional republic comprising fifty states and a federal district...
) met. South of that line, the land mass is referred to as Gondwana
Gondwana
In paleogeography, Gondwana , originally Gondwanaland, was the southernmost of two supercontinents that later became parts of the Pangaea supercontinent. It existed from approximately 510 to 180 million years ago . Gondwana is believed to have sutured between ca. 570 and 510 Mya,...
. North of the line, it is referred to as Laurasia
Laurasia
In paleogeography, Laurasia was the northernmost of two supercontinents that formed part of the Pangaea supercontinent from approximately...
.

By 900 million years ago a triple junction
Triple junction
A triple junction is the point where the boundaries of three tectonic plates meet. At the triple junction a boundary will be one of 3 types - a ridge, trench or transform fault - and triple junctions can be described according to the types of plate margin that meet at them...
formed as the supercontinent Rodinia
Rodinia
In geology, Rodinia is the name of a supercontinent, a continent which contained most or all of Earth's landmass. According to plate tectonic reconstructions, Rodinia existed between 1.1 billion and 750 million years ago, in the Neoproterozoic era...
started to rift
Rift
In geology, a rift or chasm is a place where the Earth's crust and lithosphere are being pulled apart and is an example of extensional tectonics....
apart. Between about 800 million and 700 million years ago, it split in half. This was one of the most significant rifting events of all time, because it opened up the Panthalassic Ocean to the west of Laurentia
Laurentia
Laurentia is a large area of continental craton, which forms the ancient geological core of the North American continent...
, a continent that became North America
North America
North America is a continent wholly within the Northern Hemisphere and almost wholly within the Western Hemisphere. It is also considered a northern subcontinent of the Americas...
. In western Laurentia (North America), tectonic episodes that preceded this rifting produced failed rift
Aulacogen
In geology, an aulacogen is a failed arm of a triple junction of a plate tectonics rift system. A triple junction beneath a continental plate initiates a three way breakup of the continental plate. As the continental break-up develops one of the three spreading ridges typically fails or stops...
s that harbored large depositional basins in Western Laurentia. The global ocean of Mirovia
Mirovia
Mirovia was a hypothesized superocean which may have been a global ocean surrounding the supercontinent Rodinia in the Neoproterozoic Era, about 1 billion to 750 million years ago. The Mirovia may be essentially identical to, or the precursor of, the hypothesized Pan-African Ocean, which followed...
, an ocean that surrounded Rodinia, started to shrink because the Pan-African ocean and Panthalassa were expanding. Between 650 million and 550 million years ago, another supercontinent was forming, Pannotia
Pannotia
Pannotia, first described by Ian W. D. Dalziel in 1997, is a hypothetical supercontinent that existed from the Pan-African orogeny about six hundred million years ago to the end of the Precambrian about five hundred and fifty million years ago. It is also known as the Vendian supercontinent...
, which was shaped like a "V". Inside the "V" was Panthalassa, outside of the "V" was the Pan-African Ocean
Pan-African Ocean
The Pan-African Ocean is a hypothesized paleo-ocean whose closure created the supercontinent of Pannotia. The ocean may have existed before the break-up of the supercontinent of Rodinia. The ocean closed before the beginning of the Phanerozoic Eon, when the Panthalassa ocean expanded, and was...
and remnants of the Mirovia Ocean.

Most of Panthalassa's oceanic basin
Oceanic basin
Hydrologically, an oceanic basin may be anywhere on Earth that is covered by seawater, but geologically ocean basins are large geologic basins that are below sea level...
and crust
Oceanic crust
Oceanic crust is the part of Earth's lithosphere that surfaces in the ocean basins. Oceanic crust is primarily composed of mafic rocks, or sima, which is rich in iron and magnesium...
has been subducted under the North American plate
North American Plate
The North American Plate is a tectonic plate covering most of North America, Greenland, Cuba, Bahamas, and parts of Siberia, Japan and Iceland. It extends eastward to the Mid-Atlantic Ridge and westward to the Chersky Range in eastern Siberia. The plate includes both continental and oceanic crust...
, and the Eurasian Plate
Eurasian Plate
The Eurasian Plate is a tectonic plate which includes most of the continent of Eurasia , with the notable exceptions of the Indian subcontinent, the Arabian subcontinent, and the area east of the Chersky Range in East Siberia...
. Panthalassa's oceanic plate remnants may be the Juan de Fuca
Juan de Fuca Plate
The Juan de Fuca Plate, named after the explorer of the same name, is a tectonic plate, generated from the Juan de Fuca Ridge, and subducting under the northerly portion of the western side of the North American Plate at the Cascadia subduction zone...
, Gorda
Gorda Plate
The Gorda Plate, located beneath the Pacific Ocean off the coast of northern California, is one of the northern remnants of the Farallon Plate. It is sometimes referred to as simply the southernmost portion of the neighboring Juan de Fuca Plate, another Farallon remnant.Unlike most tectonic...
, Cocos
Cocos Plate
The Cocos Plate is an oceanic tectonic plate beneath the Pacific Ocean off the west coast of Central America, named for Cocos Island, which rides upon it.-Geology:...
and the Nazca
Nazca Plate
]The Nazca Plate, named after the Nazca region of southern Peru, is an oceanic tectonic plate in the eastern Pacific Ocean basin off the west coast of South America. The ongoing subduction along the Peru-Chile Trench of the Nazca Plate under the South American Plate is largely responsible for the...
plates, all four of which were part of the Farallon Plate
Farallon Plate
The Farallon Plate was an ancient oceanic plate, which began subducting under the west coast of the North American Plate— then located in modern Utah— as Pangaea broke apart during the Jurassic Period...
. The Pacific Ocean evolved from Panthalassa after the break-up of the supercontinent of Pangaea
Pangaea
Pangaea, Pangæa, or Pangea is hypothesized as a supercontinent that existed during the Paleozoic and Mesozoic eras about 250 million years ago, before the component continents were separated into their current configuration....
, which in Greek means, "all the earth."
The source of this article is wikipedia, the free encyclopedia.  The text of this article is licensed under the GFDL.