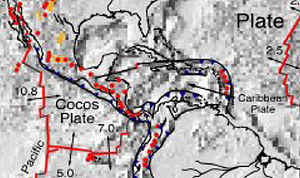 The Cocos Plate is an oceanic tectonic plate beneath the Pacific Ocean
Pacific Ocean
The Pacific Ocean is the largest of the Earth's oceanic divisions. It extends from the Arctic in the north to the Southern Ocean in the south, bounded by Asia and Australia in the west, and the Americas in the east.At 165.2 million square kilometres in area, this largest division of the World...
off the west coast of Central America
Central America
Central America is the central geographic region of the Americas. It is the southernmost, isthmian portion of the North American continent, which connects with South America on the southeast. When considered part of the unified continental model, it is considered a subcontinent...
, named for Cocos Island
Cocos Island
Cocos Island is an uninhabited island located off the shore of Costa Rica . It constitutes the 11th district of Puntarenas Canton of the province of Puntarenas. It is one of the National Parks of Costa Rica...
, which rides upon it.

The Cocos Plate is created by sea floor spreading along the East Pacific Rise
East Pacific Rise
The East Pacific Rise is a mid-oceanic ridge, a divergent tectonic plate boundary located along the floor of the Pacific Ocean. It separates the Pacific Plate to the west from the North American Plate, the Rivera Plate, the Cocos Plate, the Nazca Plate, and the Antarctic Plate...
and the Cocos Ridge, specifically in a complicated area geologists call the Cocos-Nazca spreading system. From the rise the plate is pushed eastward and pushed or dragged (perhaps both) under the less dense overriding Caribbean Plate
Caribbean Plate
The Caribbean Plate is a mostly oceanic tectonic plate underlying Central America and the Caribbean Sea off the north coast of South America....
, in the process called subduction
Subduction
In geology, subduction is the process that takes place at convergent boundaries by which one tectonic plate moves under another tectonic plate, sinking into the Earth's mantle, as the plates converge. These 3D regions of mantle downwellings are known as "Subduction Zones"...
. The subducted leading edge heats up and adds its water to the mantle above it. In the mantle layer called the asthenosphere
Asthenosphere
The asthenosphere is the highly viscous, mechanically weak and ductilely-deforming region of the upper mantle of the Earth...
, mantle rock melts to make magma
Magma
Magma is a mixture of molten rock, volatiles and solids that is found beneath the surface of the Earth, and is expected to exist on other terrestrial planets. Besides molten rock, magma may also contain suspended crystals and dissolved gas and sometimes also gas bubbles. Magma often collects in...
, trapping superheated water
Superheated water
Superheated water is liquid water under pressure at temperatures between the usual boiling point and the critical temperature . It is also known as subcritical water and pressurized hot water...
under great pressure. As a result, to the northeast of the subducting edge lies the continuous arc of volcano
Volcano
2. Bedrock3. Conduit 4. Base5. Sill6. Dike7. Layers of ash emitted by the volcano8. Flank| 9. Layers of lava emitted by the volcano10. Throat11. Parasitic cone12. Lava flow13. Vent14. Crater15...
s stretching from Costa Rica
Costa Rica
Costa Rica , officially the Republic of Costa Rica is a multilingual, multiethnic and multicultural country in Central America, bordered by Nicaragua to the north, Panama to the southeast, the Pacific Ocean to the west and the Caribbean Sea to the east....
to Guatemala
Guatemala
Guatemala is a country in Central America bordered by Mexico to the north and west, the Pacific Ocean to the southwest, Belize to the northeast, the Caribbean to the east, and Honduras and El Salvador to the southeast...
and a belt of earthquakes that extends farther north, into Mexico
Mexico
The United Mexican States , commonly known as Mexico , is a federal constitutional republic in North America. It is bordered on the north by the United States; on the south and west by the Pacific Ocean; on the southeast by Guatemala, Belize, and the Caribbean Sea; and on the east by the Gulf of...
.

The northern boundary of the Cocos Plate is the Middle America Trench
Middle America Trench
The Middle America Trench is a major subduction zone, an oceanic trench in the eastern Pacific Ocean off the southwestern coast of Middle America, stretching from central Mexico to Costa Rica...
. The eastern boundary is a transform fault
Transform fault
A transform fault or transform boundary, also known as conservative plate boundary since these faults neither create nor destroy lithosphere, is a type of fault whose relative motion is predominantly horizontal in either sinistral or dextral direction. Furthermore, transform faults end abruptly...
, the Panama Fracture Zone
Panama Fracture Zone
The Panama Fracture Zone is a major, active right lateral-moving transform fault and associated inactive fracture zone which forms part of the tectonic boundary between the Cocos Plate and the Nazca Plate. It runs from the East Pacific Rise to the Middle America Trench....
. The southern boundary is a mid-oceanic ridge, the Galapagos Rise
Galapagos Rise
The Galapagos Rise is a divergent boundary located between the South American coast and the triple junction of the Nazca Plate, the Cocos Plate, and the Pacific Plate. The volcanically active Galapagos Islands exist on the Galápagos hotspot above the Galapagos Rise...
. The western boundary is another mid-ocean ridge, the East Pacific Rise
East Pacific Rise
The East Pacific Rise is a mid-oceanic ridge, a divergent tectonic plate boundary located along the floor of the Pacific Ocean. It separates the Pacific Plate to the west from the North American Plate, the Rivera Plate, the Cocos Plate, the Nazca Plate, and the Antarctic Plate...
.

The Cocos and Nazca Plate
Nazca Plate
]The Nazca Plate, named after the Nazca region of southern Peru, is an oceanic tectonic plate in the eastern Pacific Ocean basin off the west coast of South America. The ongoing subduction along the Peru-Chile Trench of the Nazca Plate under the South American Plate is largely responsible for the...
s are the remnants of the former Farallon Plate
Farallon Plate
The Farallon Plate was an ancient oceanic plate, which began subducting under the west coast of the North American Plate— then located in modern Utah— as Pangaea broke apart during the Jurassic Period...
, which broke up about 23 million years ago. A hotspot
Hotspot (geology)
The places known as hotspots or hot spots in geology are volcanic regions thought to be fed by underlying mantle that is anomalously hot compared with the mantle elsewhere. They may be on, near to, or far from tectonic plate boundaries. There are two hypotheses to explain them...
under the Galapagos Islands
Galápagos Islands
The Galápagos Islands are an archipelago of volcanic islands distributed around the equator in the Pacific Ocean, west of continental Ecuador, of which they are a part.The Galápagos Islands and its surrounding waters form an Ecuadorian province, a national park, and a...
lies along the Galapagos Rise. (see Galapagos hotspot
Galápagos hotspot
The Galápagos hotspot is a volcanic hotspot in the East Pacific Ocean responsible for the creation of the Galapagos Islands as well as three major aseismic ridge systems, Carnegie, Cocos and Malpelso which are on two tectonic plates. The hotspot is located near the Equator on the Nazca Plate not...
)

The Rivera Plate
Rivera Plate
The Rivera Plate is a small tectonic plate located off the west coast of Mexico, just south of the Baja California Peninsula. It is bounded on the northwest by the East Pacific Rise, on the southwest by the Rivera Transform Fault, on the southeast by a deformation zone, and on the northeast by...
north of the Cocos Plate is thought to have separated from the Cocos Plate 5-10 million years ago. The boundary between the two plates appears to lack a definite transform fault, yet they are regarded as distinct.