Encyclopedia
A panorama is any wide-angle view or representation of a physical space, whether in painting
Painting
Painting is the practice of applying paint, pigment, color or other medium to a surface . The application of the medium is commonly applied to the base with a brush but other objects can be used. In art, the term painting describes both the act and the result of the action. However, painting is...
, drawing
Drawing
Drawing is a form of visual art that makes use of any number of drawing instruments to mark a two-dimensional medium. Common instruments include graphite pencils, pen and ink, inked brushes, wax color pencils, crayons, charcoal, chalk, pastels, markers, styluses, and various metals .An artist who...
, photography
Photography
Photography is the art, science and practice of creating durable images by recording light or other electromagnetic radiation, either electronically by means of an image sensor or chemically by means of a light-sensitive material such as photographic film...
, film
Film
A film, also called a movie or motion picture, is a series of still or moving images. It is produced by recording photographic images with cameras, or by creating images using animation techniques or visual effects...
/video
Video
Video is the technology of electronically capturing, recording, processing, storing, transmitting, and reconstructing a sequence of still images representing scenes in motion.- History :...
, or a three-dimensional model.

The word was originally coined by the Irish
Irish people
The Irish people are an ethnic group who originate in Ireland, an island in northwestern Europe. Ireland has been populated for around 9,000 years , with the Irish people's earliest ancestors recorded having legends of being descended from groups such as the Nemedians, Fomorians, Fir Bolg, Tuatha...
painter Robert Barker
Robert Barker (painter)
Robert Barker was an English painter of Irish ancestry from Newcastle-upon-Tyne-Biography:The English itinerant portrait painter Robert Barker coined the word "panorama", from Greek pan horama in 1792 to describe his paintings of Edinburgh, Scotland shown on a cylindrical surface, which he soon...
to describe his panoramic painting
Panoramic painting
Panoramic paintings are massive artworks that reveal a wide, all-encompassing view of a particular subject, often a landscape, military battle, or historical event. They became especially popular in the 19th Century in Europe and the United States, inciting opposition from writers of Romantic poetry...
s of Edinburgh
Edinburgh
Edinburgh is the capital city of Scotland, the second largest city in Scotland, and the eighth most populous in the United Kingdom. The City of Edinburgh Council governs one of Scotland's 32 local government council areas. The council area includes urban Edinburgh and a rural area...
. Shown on a cylindrical surface and viewed from the inside, they were exhibited in London
London
London is the capital city of :England and the :United Kingdom, the largest metropolitan area in the United Kingdom, and the largest urban zone in the European Union by most measures. Located on the River Thames, London has been a major settlement for two millennia, its history going back to its...
in 1792 as "The Panorama". The motion-picture term panning
Panning (camera)
In photography, panning refers to the horizontal movement or rotation of a still or video camera, or the scanning of a subject horizontally on video or a display device...
is derived from panorama.

On rare occasions, 360° panoramic movies have been constructed for specially designed display spaces—typically at theme parks, world's fair
World's Fair
World's fair, World fair, Universal Exposition, and World Expo are various large public exhibitions held in different parts of the world. The first Expo was held in The Crystal Palace in Hyde Park, London, United Kingdom, in 1851, under the title "Great Exhibition of the Works of Industry of All...
s, and museums. Starting in 1955, Disney
The Walt Disney Company
The Walt Disney Company is the largest media conglomerate in the world in terms of revenue. Founded on October 16, 1923, by Walt and Roy Disney as the Disney Brothers Cartoon Studio, Walt Disney Productions established itself as a leader in the American animation industry before diversifying into...
has created 360° theaters
Circle-Vision 360°
Circle-Vision 360° is a film technique, refined by The Walt Disney Company, that uses nine cameras for nine huge screens arranged in a circle. The cameras are usually mounted on top of an automobile for scenes through cities and highways, while films such as The Timekeeper use a static camera and...
for its parks and the Swiss Transport Museum
Swiss Transport Museum
The Swiss Transport Museum or Verkehrshaus der Schweiz, in Lucerne, is a museum, opened in July 1959 and exhibiting all forms of transport as well as communications...
in Lucerne
Lucerne
Lucerne is a city in north-central Switzerland, in the German-speaking portion of that country. Lucerne is the capital of the Canton of Lucerne and the capital of the district of the same name. With a population of about 76,200 people, Lucerne is the most populous city in Central Switzerland, and...
, Switzerland
Switzerland
Switzerland name of one of the Swiss cantons. ; ; ; or ), in its full name the Swiss Confederation , is a federal republic consisting of 26 cantons, with Bern as the seat of the federal authorities. The country is situated in Western Europe,Or Central Europe depending on the definition....
, features a theatre that is a large cylindrical space with an arrangement of screens whose bottom is several metres above the floor. Panoramic systems that are less than 360° around also exist. For example, Cinerama
Cinerama
Cinerama is the trademarked name for a widescreen process which works by simultaneously projecting images from three synchronized 35 mm projectors onto a huge, deeply-curved screen, subtending 146° of arc. It is also the trademarked name for the corporation which was formed to market it...
used a curved screen and IMAX Dome / OMNIMAX movies are projected on a dome above the spectators.

One final form of panoramic representation is digital mapping generated from SRTM
Shuttle Radar Topography Mission
The Shuttle Radar Topography Mission is an international research effort that obtained digital elevation models on a near-global scale from 56° S to 60° N, to generate the most complete high-resolution digital topographic database of Earth prior to the release of the ASTER GDEM in 2009...
data. In these diagrams, a computer calculates the panorama from a given point. 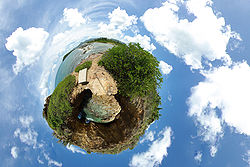