Encyclopedia
Pall Mall ˌ is a street in the City of Westminster
City of Westminster
The City of Westminster is a London borough occupying much of the central area of London, England, including most of the West End. It is located to the west of and adjoining the ancient City of London, directly to the east of the Royal Borough of Kensington and Chelsea, and its southern boundary...
, London
London
London is the capital city of :England and the :United Kingdom, the largest metropolitan area in the United Kingdom, and the largest urban zone in the European Union by most measures. Located on the River Thames, London has been a major settlement for two millennia, its history going back to its...
, and parallel to The Mall
The Mall (London)
The Mall in central London is the road running from Buckingham Palace at its western end to Admiralty Arch and on to Trafalgar Square at its eastern end. It then crosses Spring Gardens, which was where the Metropolitan Board of Works and, for a number of years, the London County Council were...
, from St. James's Street across Waterloo Place to the Haymarket
The Haymarket
Haymarket is a street in the St. James's district of the City of Westminster, London. It runs from Piccadilly Circus at the north to Pall Mall at the south...
; while Pall Mall East continues into Trafalgar Square
Trafalgar Square
Trafalgar Square is a public space and tourist attraction in central London, England, United Kingdom. At its centre is Nelson's Column, which is guarded by four lion statues at its base. There are a number of statues and sculptures in the square, with one plinth displaying changing pieces of...
. The street is a major thoroughfare in the St James's area of London, and a section of the regional A4 road. The name of the street is derived from "pall mall
Pall mall (game)
Paille-maille is a lawn game that was mostly played in the 16th and 17th centuries, a precursor to croquet.-History:...
", a mallet-and-ball game that was played there during the 17th century.

Pall Mall is best known for being the home to various gentlemen's clubs built in the 19th and early 20th centuries. These include the Athenaeum
Athenaeum Club, London
The Athenaeum Club, usually just referred to as the Athenaeum, is a notable London club with its Clubhouse located at 107 Pall Mall, London, England, at the corner of Waterloo Place....
, Travellers Club
Travellers Club
The Travellers Club is a gentlemen's club standing at 106 Pall Mall, London. It is the oldest of the surviving Pall Mall clubs, having been established in 1819, and was recently described by the Los Angeles Times as "the quintessential English gentleman's club." Visits are possible by invitation...
, Army and Navy Club
Army and Navy Club
The Army and Navy Club in London is a gentlemen's club founded in 1837, also known informally as The Rag.-Foundation and membership:...
, Reform Club
Reform Club
The Reform Club is a gentlemen's club on the south side of Pall Mall, in central London. Originally for men only, it changed to include the admission of women in 1981. In 2011 the subscription for membership of the Reform Club as a full UK member is £1,344.00, with a one-off entrance fee of £875.00...
, United Service Club
United Service Club
The United Service Club was a London gentlemen's club, now dissolved, which was established in 1815 and was disbanded in 1978. Its clubhouse was at 116 Pall Mall, on the corner of Waterloo Place....
(now occupied by the Institute of Directors
Institute of Directors
The Institute of Directors is a UK-based organisation, established in 1903 and incorporated by royal charter in 1906 to support, represent and set standards for company directors...
), Oxford and Cambridge Club
Oxford and Cambridge Club
The Oxford and Cambridge Club is at 71 Pall Mall, London, England. The clubhouse was designed for the membership by architect Sir Robert Smirke and completed towards the end of 1837. It was founded for members of the universities of Oxford and Cambridge...
and Royal Automobile Club
Royal Automobile Club
The Royal Automobile Club is a private club and is not to be confused with RAC plc, a motorists' organisation, which it formerly owned.It has two club houses, one in London at 89-91 Pall Mall, and the other in the countryside at Woodcote Park, Surrey, next to the City of London Freemen's School...
. 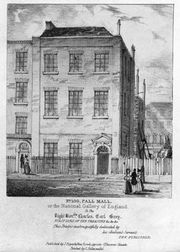 It was also once the centre of the fine art scene in London; in 1814 the Royal Academy
Royal Academy
The Royal Academy of Arts is an art institution based in Burlington House on Piccadilly, London. The Royal Academy of Arts has a unique position in being an independent, privately funded institution led by eminent artists and architects whose purpose is to promote the creation, enjoyment and...
, the National Gallery
National Gallery, London
The National Gallery is an art museum on Trafalgar Square, London, United Kingdom. Founded in 1824, it houses a collection of over 2,300 paintings dating from the mid-13th century to 1900. The gallery is an exempt charity, and a non-departmental public body of the Department for Culture, Media...
and Christie's
Christie's
Christie's is an art business and a fine arts auction house.- History :The official company literature states that founder James Christie conducted the first sale in London, England, on 5 December 1766, and the earliest auction catalogue the company retains is from December 1766...
auction house were all here, but none of them stayed for long.

The freehold of nearly all of the southern side of the Pall Mall has belonged to the crown for several hundred years, and is still owned by the Crown Estate
Crown Estate
In the United Kingdom, the Crown Estate is a property portfolio owned by the Crown. Although still belonging to the monarch and inherent with the accession of the throne, it is no longer the private property of the reigning monarch and cannot be sold by him/her, nor do the revenues from it belong...
. St. James's Palace
St. James's Palace
St. James's Palace is one of London's oldest palaces. It is situated in Pall Mall, just north of St. James's Park. Although no sovereign has resided there for almost two centuries, it has remained the official residence of the Sovereign and the most senior royal palace in the UK...
is on the south side of the street at the western end. Marlborough House
Marlborough House
Marlborough House is a mansion in Westminster, London, in Pall Mall just east of St James's Palace. It was built for Sarah Churchill, Duchess of Marlborough, the favourite and confidante of Queen Anne. The Duchess wanted her new house to be "strong, plain and convenient and good"...
, which was once a royal residence, is next to it to the east, opening off of a courtyard just to the south of the street. The Prince Regent's
George IV of the United Kingdom
George IV was the King of the United Kingdom of Great Britain and Ireland and also of Hanover from the death of his father, George III, on 29 January 1820 until his own death ten years later...
Carlton House once stood at the eastern end of the street. Pall Mall was also once the home of the War Office
War Office
The War Office was a department of the British Government, responsible for the administration of the British Army between the 17th century and 1964, when its functions were transferred to the Ministry of Defence...
, with which it became synonymous (just as Whitehall
Whitehall
Whitehall is a road in Westminster, in London, England. It is the main artery running north from Parliament Square, towards Charing Cross at the southern end of Trafalgar Square...
refers to the administrative centre of the UK government). The War Office was based in a complex of buildings based on the ducal mansion of Cumberland House
Cumberland House
Cumberland House was a mansion on the south side of Pall Mall in London, England. It was built in the 1760s by Matthew Brettingham for Prince Edward, Duke of York and Albany and was originally called York House...
which was designed by Matthew Brettingham
Matthew Brettingham
Matthew Brettingham , sometimes called Matthew Brettingham the Elder, was an 18th-century Englishman who rose from humble origins to supervise the construction of Holkham Hall, and eventually became one of the country's better-known architects of his generation...
and Robert Adam
Robert Adam
Robert Adam was a Scottish neoclassical architect, interior designer and furniture designer. He was the son of William Adam , Scotland's foremost architect of the time, and trained under him...
.

There were at least two other architecturally important ducal residences in the street, Schomberg House
Schomberg House
Schomberg House is a mansion on the south side of Pall Mall in central London which has a colourful history. Only the street facade survives today. It was built for Meinhardt Schomberg, 3rd Duke of Schomberg, a Huguenot general in the service of the British crown...
, and Buckingham House, the London residence of the Dukes of Buckingham and Chandos which was rebuilt for them by Sir John Soane
John Soane
Sir John Soane, RA was an English architect who specialised in the Neo-Classical style. His architectural works are distinguished by their clean lines, massing of simple form, decisive detailing, careful proportions and skilful use of light sources...
(not to be confused with the Buckingham House which became Buckingham Palace
Buckingham Palace
Buckingham Palace, in London, is the principal residence and office of the British monarch. Located in the City of Westminster, the palace is a setting for state occasions and royal hospitality...
). Buckingham House was demolished in 1908 to make way for the Royal Automobile Club.

The former branch of the Midland Bank
Midland Bank
Midland Bank Plc was one of the Big Four banking groups in the United Kingdom for most of the 20th century. It is now part of HSBC. The bank was founded as the Birmingham and Midland Bank in Union Street, Birmingham, England in August 1836...
in Pall Mall was designed by Sir Edwin Lutyens
Edwin Lutyens
Sir Edwin Landseer Lutyens, OM, KCIE, PRA, FRIBA was a British architect who is known for imaginatively adapting traditional architectural styles to the requirements of his era...
.

Pall Mall is also a destination on the Monopoloy Board. 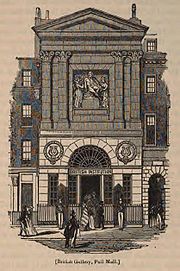