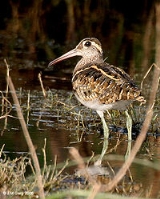 Encyclopedia
Painted snipes are three distinctive wader
Wader
Waders, called shorebirds in North America , are members of the order Charadriiformes, excluding the more marine web-footed seabird groups. The latter are the skuas , gulls , terns , skimmers , and auks...
species
Species
In biology, a species is one of the basic units of biological classification and a taxonomic rank. A species is often defined as a group of organisms capable of interbreeding and producing fertile offspring. While in many cases this definition is adequate, more precise or differing measures are...
in the family
Family (biology)
In biological classification, family is* a taxonomic rank. Other well-known ranks are life, domain, kingdom, phylum, class, order, genus, and species, with family fitting between order and genus. As for the other well-known ranks, there is the option of an immediately lower rank, indicated by the...
Rostratulidae. The family is composed to two genera, Rostratula
Rostratula
Rostratula is a genus of painted snipes. It contains two species distributed across Africa, Asia and Australia.- Species:*Greater Painted Snipe is found in marshes in Africa, India and South-east Asia....
and Nycticryphes. The Australian Painted Snipe
Australian Painted Snipe
The Australian Painted Snipe is a medium-sized, long-billed, distinctively patterned wader.-Taxonomy:The distinctiveness of the Australian Painted-snipe was recognised by John Gould in 1838 when he described and named it Rostratula australis. However, it was subsequently lumped with the Greater...
is often treated as a subspecies of the Greater Painted Snipe
Greater Painted Snipe
The Greater Painted Snipe, Rostratula benghalensis, is a species of wader in the family Rostratulidae. It is found in marshes in Africa, India, Pakistan, and South-east Asia -Description:...
, but morphological and genetic differences have resulted in the species being split in recent years. While they superficially resemble true snipe
Snipe
A snipe is any of about 25 wading bird species in three genera in the family Scolopacidae. They are characterized by a very long, slender bill and crypsis plumage. The Gallinago snipes have a nearly worldwide distribution, the Lymnocryptes Jack Snipe is restricted to Asia and Europe and the...
s, they are considered to be more closely related to the jacana
Jacana
The jaçanas are a group of tropical waders in the family Jacanidae. They are found worldwide within the tropical zone. See Etymology below for pronunciation....
s.

The painted snipes are short-legged, long-billed bird
Bird
Birds are feathered, winged, bipedal, endothermic , egg-laying, vertebrate animals. Around 10,000 living species and 188 families makes them the most speciose class of tetrapod vertebrates. They inhabit ecosystems across the globe, from the Arctic to the Antarctic. Extant birds range in size from...
s similar in shape to the true snipes, but their plumage
Plumage
Plumage refers both to the layer of feathers that cover a bird and the pattern, colour, and arrangement of those feathers. The pattern and colours of plumage vary between species and subspecies and can also vary between different age classes, sexes, and season. Within species there can also be a...
is much more striking. There is sexual dimorphism
Sexual dimorphism
Sexual dimorphism is a phenotypic difference between males and females of the same species. Examples of such differences include differences in morphology, ornamentation, and behavior.-Examples:-Ornamentation / coloration:...
in both size and plumage, with the males being duller overall and smaller. All three species have large forward pointing eyes, and painted snipes are crepuscular
Crepuscular
Crepuscular animals are those that are active primarily during twilight, that is during dawn and dusk. The word is derived from the Latin word crepusculum, meaning "twilight." Crepuscular is, thus, in contrast with diurnal and nocturnal behavior. Crepuscular animals may also be active on a bright...
or even slightly nocturnal
Nocturnal animal
Nocturnality is an animal behavior characterized by activity during the night and sleeping during the day. The common adjective is "nocturnal"....
in their habits.

The breeding biology of the painted snipes varies according to genus; the Rostratula painted snipes are generally polyandrous whereas the Lesser Painted Snipe is monogamous
Monogamy
Monogamy /Gr. μονός+γάμος - one+marriage/ a form of marriage in which an individual has only one spouse at any one time. In current usage monogamy often refers to having one sexual partner irrespective of marriage or reproduction...
. The females of the genus Rostratula will bond with several males during a breeding season, but once the eggs are laid the males provide all the incubation
Avian incubation
Incubation refers to the process by which certain oviparous animals hatch their eggs, and to the development of the embryo within the egg. The most vital factor of incubation is the constant temperature required for its development over a specific period. Especially in domestic fowl, the act of...
and parental care. The nest
Bird nest
A bird nest is the spot in which a bird lays and incubates its eggs and raises its young. Although the term popularly refers to a specific structure made by the bird itself—such as the grassy cup nest of the American Robin or Eurasian Blackbird, or the elaborately woven hanging nest of the...
of both species is a shallow cup, often built on a platform of vegetation. Clutch sizes range from 2-4 eggs, which are incubated for 15-21 days.

All three species live in reedy swamp
Swamp
A swamp is a wetland with some flooding of large areas of land by shallow bodies of water. A swamp generally has a large number of hammocks, or dry-land protrusions, covered by aquatic vegetation, or vegetation that tolerates periodical inundation. The two main types of swamp are "true" or swamp...
s and marshes, usually in lowlands. Outside of the breeding season they are generally solitary in habits. They are omnivorous, feeding on invertebrates and seeds. Animal prey taken includes annelid
Annelid
The annelids , formally called Annelida , are a large phylum of segmented worms, with over 17,000 modern species including ragworms, earthworms and leeches...
worms, snails, aquatic and marsh insect
Insect
Insects are a class of living creatures within the arthropods that have a chitinous exoskeleton, a three-part body , three pairs of jointed legs, compound eyes, and two antennae...
s, and crustaceans. The seeds of grasses such as millet and rice are also consumed, and may form a major part of the diet of some populations.

At present two species, the Lesser and Greater Painted Snipes, are not considered threatened by human activities; however, The Australian Painted Snipe has declined and is considered endangered in Australia
Australia
Australia , officially the Commonwealth of Australia, is a country in the Southern Hemisphere comprising the mainland of the Australian continent, the island of Tasmania, and numerous smaller islands in the Indian and Pacific Oceans. It is the world's sixth-largest country by total area...
.