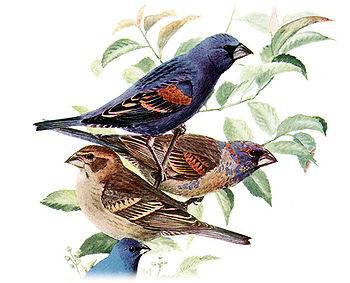 Plumage refers both to the layer of feather
Feather
Feathers are one of the epidermal growths that form the distinctive outer covering, or plumage, on birds and some non-avian theropod dinosaurs. They are considered the most complex integumentary structures found in vertebrates, and indeed a premier example of a complex evolutionary novelty. They...
s that cover a bird
Bird
Birds are feathered, winged, bipedal, endothermic , egg-laying, vertebrate animals. Around 10,000 living species and 188 families makes them the most speciose class of tetrapod vertebrates. They inhabit ecosystems across the globe, from the Arctic to the Antarctic. Extant birds range in size from...
and the pattern, colour, and arrangement of those feathers. The pattern and colours of plumage vary between species and subspecies and can also vary between different age classes, sexes, and season. Within species there can also be a number of different colour morphs. Differences in plumage are used by ornithologists
Ornithology
Ornithology is a branch of zoology that concerns the study of birds. Several aspects of ornithology differ from related disciplines, due partly to the high visibility and the aesthetic appeal of birds...
and birdwatchers in order to distinguish between species and collect other species specific information.

Almost all species of birds moult
Moult
In biology, moulting or molting , also known as sloughing, shedding, or for some species, ecdysis, is the manner in which an animal routinely casts off a part of its body , either at specific times of year, or at specific points in its life cycle.Moulting can involve the epidermis , pelage...
at least annually, usually after the breeding season, known as the pre-basic moult. This resulting covering of feathers, which will last either until the next breeding season or until the next annual moult, is known as the basic plumage. Many species undertake another moult prior to the breeding season known as the pre-alternate moult, the resulting breeding plumage being known as the alternate plumage or nuptial plumage. The alternate plumage is often brighter than the basic plumage, for the purposes of sexual display, but may also be cryptic in order to hide incubating birds that might be vulnerable on the nest.

Many ducks have bright, colourful plumage, exhibiting strong sexual dimorphism
Sexual dimorphism
Sexual dimorphism is a phenotypic difference between males and females of the same species. Examples of such differences include differences in morphology, ornamentation, and behavior.-Examples:-Ornamentation / coloration:...
to attract the females. However, they moult into a dull plumage in the non-breeding season. This drab female-like appearance is the eclipse plumage. When they shed feathers to go into eclipse, the ducks become flightless for a short period of time. Some duck species remain in eclipse for one to three months in the summer, while other would retain the cryptic plumage until the next spring when they undergo another moult to return to their breeding plumage. Although mainly found in the Anatidae
Anatidae
Anatidae is the biological family of birds that includes ducks, geese and swans. The family has a cosmopolitan distribution, occurring on all the world's continents except Antarctica and on most of the world's islands and island groups...
, a few other species (for example the Red Junglefowl
Red Junglefowl
The Red Junglefowl is a tropical member of the Pheasant family. They are thought to be ancestors of the domestic chicken with some hybridisation with the Grey Junglefowl...
) also have an eclipse plumage.

There are hereditary as well as non-hereditary variations in plumage that are rare and termed as abnormal or aberrant plumages. Albinism
Albinism
Albinism is a congenital disorder characterized by the complete or partial absence of pigment in the skin, hair and eyes due to absence or defect of an enzyme involved in the production of melanin...
involves loss of colour in all parts including the iris of the eyes, bills, skin, legs and feet. It is usually the result of a genetic mutation causing the absence of tyrosinase
Tyrosinase
Tyrosinase also known as monophenol monooxygenase is an enzyme that catalyses the oxidation of phenols and is widespread in plants and animals...
, an enzyme essential for melanin synthesis. Albino adults are rare in the wild because their eyesight is poor resulting in greater risk of predation. Leucism (which includes what used to be termed as "partial albinism") refers to loss of pigments in some or all parts of feathers. Melanism refers to an excess of black or dark colours. Erythromelanism or erythrism
Erythrism
Erythrism or erythrochroism refers to an unusual reddish pigmentation of an animal's fur, hair, skin, feathers, or eggshells.Causes of erythrism include*genetic mutations which cause an absence of a normal pigment and/or excessive production of others...
is the result of excessive reddish brown erythromelanin deposition in feathers that normally lack melanin. Melanin of different forms combine with xanthophylls to produce colour mixtures and when this combination is imbalanced it produces colour shifts that are termed as schizochroisms (including xanthochromism
Xanthochromism
Xanthochromism is a term that may be applied to birds, fish and other animals whose colouration is unusually yellow through an excess of yellow pigment, or possibly a loss of darker pigments that allows yellow pigment to be unusually dominant...
– overabundance of yellow – and axanthism – lack of yellow – which are commonly bred in cagebirds such as budgerigars). A reduction in eumelanin leads to non-eumelanin schizochroism with an overall fawn plumage while a lack of phaeomelanin results in grey coloured non-phaeomelanin schizochroism. Carotenism refers to abnormal distribution of carotenoid pigments.

The term "dilution" is used for situations where the colour is of a lower intensity overall; it is caused by decreased deposition of pigment in the developing feather, and can thus not occur in structural coloration (i.e. "dilute blue" does not exist); pale structural colors are instead achieved by shifting the peak wavelength at which light is refracted. Dilution regularly occurs in normal plumage (grey, buff, pink and cream colours are usually produced by this process), but may in addition occur as an aberration (e.g. all normally black plumage becoming grey).

In some birds – many true owls (Strigidae), some nightjar
Nightjar
Nightjars are medium-sized nocturnal or crepuscular birds with long wings, short legs and very short bills. They are sometimes referred to as goatsuckers from the mistaken belief that they suck milk from goats . Some New World species are named as nighthawks...
s (Caprimulgidae) and a few cuckoo
Cuckoo
The cuckoos are a family, Cuculidae, of near passerine birds. The order Cuculiformes, in addition to the cuckoos, also includes the turacos . Some zoologists and taxonomists have also included the unique Hoatzin in the Cuculiformes, but its taxonomy remains in dispute...
s (Cuculus
Cuculus
Cuculus is a genus of cuckoos which has representatives in most of the Old World, although the greatest diversity is in tropical southern and southeastern Asia...
and relatives) being widely known examples – there is colour polymorphism
Polymorphism (biology)
Polymorphism in biology occurs when two or more clearly different phenotypes exist in the same population of a species — in other words, the occurrence of more than one form or morph...
. This means that two or more colour variants are numerous within their population
Population
A population is all the organisms that both belong to the same group or species and live in the same geographical area. The area that is used to define a sexual population is such that inter-breeding is possible between any pair within the area and more probable than cross-breeding with individuals...
s during all or at least most seasons and plumages; in the above-mentioned examples a brown (phaeomelanin) and grey (eumelanin) morph exist, termed "hepatic form" particularly in the cuckoos. Other cases of natural polymorphism are of various kinds; many are melanic/nonmelanic (some paradise-flycatchers, Terpsiphone, for example), but more unusual types of polymorphism exist – the face colour of the Gouldian Finch
Gouldian Finch
The Gouldian Finch, Erythrura gouldiae , also known as the Lady Gouldian Finch, Gould's Finch or the Rainbow Finch, is a colorful passerine bird endemic to Australia. There is strong evidence of a continuing decline, even at the best-known site near Katherine in the Northern Territory...
(Erythrura gouldiae) or the courtship types of male Ruffs (Philomachus pugnax).
The source of this article is wikipedia, the free encyclopedia.  The text of this article is licensed under the GFDL.