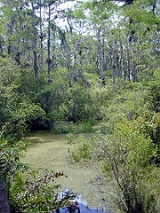 Overview
A swamp is a wetland
Wetland
A wetland is an area of land whose soil is saturated with water either permanently or seasonally. Wetlands are categorised by their characteristic vegetation, which is adapted to these unique soil conditions....
with some flooding of large areas of land by shallow bodies of water
Water
Water is a chemical substance with the chemical formula H2O. A water molecule contains one oxygen and two hydrogen atoms connected by covalent bonds. Water is a liquid at ambient conditions, but it often co-exists on Earth with its solid state, ice, and gaseous state . Water also exists in a...
. A swamp generally has a large number of hammocks
Hammock (ecology)
Hammocks are dense stands of hardwood trees that grow on natural rises of only a few inches higher than surrounding marshland that is otherwise too wet to support them. Hammocks are distinctive in that they are formed gradually over thousands of years rising in a wet area through the deposits of...
, or dry-land protrusions, covered by aquatic vegetation, or vegetation that tolerates periodical inundation. The two main types of swamp are "true" or swamp forest
Freshwater swamp forest
Freshwater swamp forests, or flooded forests, are forests which are inundated with freshwater, either permanently or seasonally. They normally occur along the lower reaches of rivers and around freshwater lakes...
s and "transitional" or shrub swamp
Shrub swamp
Shrub swamps, also called scrub swamps or buttonbush swamps, are a type of freshwater wetland ecosystem occurring in areas too wet to become hardwood swamps , but too dry or too shallow to become marshes...
s. The water of a swamp may be fresh water
Fresh Water
Fresh Water is the debut album by Australian rock and blues singer Alison McCallum, released in 1972. Rare for an Australian artist at the time, it came in a gatefold sleeve...
, brackish water
Brackish water
Brackish water is water that has more salinity than fresh water, but not as much as seawater. It may result from mixing of seawater with fresh water, as in estuaries, or it may occur in brackish fossil aquifers. The word comes from the Middle Dutch root "brak," meaning "salty"...
or seawater
Seawater
Seawater is water from a sea or ocean. On average, seawater in the world's oceans has a salinity of about 3.5% . This means that every kilogram of seawater has approximately of dissolved salts . The average density of seawater at the ocean surface is 1.025 g/ml...
.

In North America
North America
North America is a continent wholly within the Northern Hemisphere and almost wholly within the Western Hemisphere. It is also considered a northern subcontinent of the Americas...
, swamps are usually regarded as including a large amount of woody vegetation
Vegetation
Vegetation is a general term for the plant life of a region; it refers to the ground cover provided by plants. It is a general term, without specific reference to particular taxa, life forms, structure, spatial extent, or any other specific botanical or geographic characteristics. It is broader...
, but elsewhere this may not necessarily apply, such as in Africa
Africa
Africa is the world's second largest and second most populous continent, after Asia. At about 30.2 million km² including adjacent islands, it covers 6% of the Earth's total surface area and 20.4% of the total land area...
n swamps dominated by papyrus
Cyperus papyrus
Cyperus papyrus is a monocot belonging to the sedge family Cyperaceae. It is a herbaceous perennial native to Africa, and forms tall stands of reed-like swamp vegetation in shallow water....
.

What are some facts about the swamp?

What are the two biggest swamps in the United States?
More
x