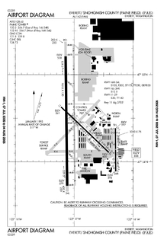 Encyclopedia
Paine Field, also known as Snohomish County Airport is a public airport located in unincorporated Snohomish County, between Mukilteo
Mukilteo, Washington
Mukilteo , which means "good camping ground", is a city in Snohomish County, Washington, United States. The population was 20,254 at the 2010 census. It is on the shore of the Puget Sound, and is the site of a Washington State Ferries terminal linking it to Clinton, on Whidbey Island.Mukilteo is...
and Everett
Everett, Washington
Everett is the county seat of and the largest city in Snohomish County, Washington, United States. Named for Everett Colby, son of founder Charles L. Colby, it lies north of Seattle. The city had a total population of 103,019 at the 2010 census, making it the 6th largest in the state and...
, Washington. It is served by a Federal Aviation Administration
Federal Aviation Administration
The Federal Aviation Administration is the national aviation authority of the United States. An agency of the United States Department of Transportation, it has authority to regulate and oversee all aspects of civil aviation in the U.S...
control tower
Control tower
A control tower, or more specifically an Air Traffic Control Tower , is the name of the airport building from which the air traffic control unit controls the movement of aircraft on and around the airport. Control towers are also used to control the traffic for other forms of transportation such...
, and has precision and non-precision instrument approach
Instrument approach
For aircraft operating under instrument flight rules , an instrument approach or instrument approach procedure is a series of predetermined maneuvers for the orderly transfer of an aircraft under instrument flight conditions from the beginning of the initial approach to a landing, or to a point...
es available to pilots. 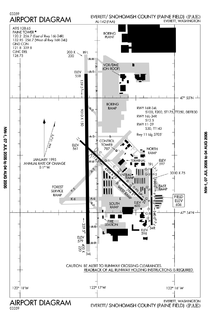 Paine Field is home to the Boeing Everett Factory
Boeing Everett Factory
The Boeing Everett Factory, in Everett, Washington, is an airplane assembly building owned by Boeing. Located on the northeast corner of Paine Field, it is the largest building in the world by volume at 13,385,378 m3 and covers 399,480 m2...
, the world's largest building by volume, and the primary assembly location for Boeing's
Boeing
The Boeing Company is an American multinational aerospace and defense corporation, founded in 1916 by William E. Boeing in Seattle, Washington. Boeing has expanded over the years, merging with McDonnell Douglas in 1997. Boeing Corporate headquarters has been in Chicago, Illinois since 2001...
wide-body 747
Boeing 747
The Boeing 747 is a wide-body commercial airliner and cargo transport, often referred to by its original nickname, Jumbo Jet, or Queen of the Skies. It is among the world's most recognizable aircraft, and was the first wide-body ever produced...
, 767
Boeing 767
The Boeing 767 is a mid-size, wide-body twin-engine jet airliner built by Boeing Commercial Airplanes. It was the manufacturer's first wide-body twinjet and its first airliner with a two-crew glass cockpit. The aircraft features two turbofan engines, a supercritical wing, and a conventional tail...
, 777
Boeing 777
The Boeing 777 is a long-range, wide-body twin-engine jet airliner manufactured by Boeing Commercial Airplanes. It is the world's largest twinjet and is commonly referred to as the "Triple Seven". The aircraft has seating for over 300 passengers and has a range from , depending on model...
and 787
Boeing 787
The Boeing 787 Dreamliner is a long-range, mid-size wide-body, twin-engine jet airliner developed by Boeing Commercial Airplanes. It seats 210 to 290 passengers, depending on the variant. Boeing states that it is the company's most fuel-efficient airliner and the world's first major airliner to use...
aircraft.

Paine Field is also home to Aviation Technical Services (ATS), one of the nation's largest aviation maintenance facilities. ATS operate a 950000 square feet (88,257.9 m²) facility; formerly operated by Goodrich
Goodrich Corporation
The Goodrich Corporation , formerly the B.F. Goodrich Company, is an American aerospace manufacturing company based in Charlotte, North Carolina. Founded in Akron, Ohio in 1870 as Goodrich, Tew & Co. by Dr. Benjamin Franklin Goodrich. The company name was changed to the "B.F...
, and sold to ATS in the fall of 2007. ATS does 'heavy' checks for a number of airlines and cargo companies. According to their web page, they average of 443 Aircraft Redeliveries each year.

On July 25, 1966, Boeing
Boeing
The Boeing Company is an American multinational aerospace and defense corporation, founded in 1916 by William E. Boeing in Seattle, Washington. Boeing has expanded over the years, merging with McDonnell Douglas in 1997. Boeing Corporate headquarters has been in Chicago, Illinois since 2001...
announced that it would build the Boeing 747
Boeing 747
The Boeing 747 is a wide-body commercial airliner and cargo transport, often referred to by its original nickname, Jumbo Jet, or Queen of the Skies. It is among the world's most recognizable aircraft, and was the first wide-body ever produced...
, a jet airliner
Jet airliner
A jet airliner is an airliner that is powered by jet engines. This term is sometimes contracted to jetliner or jet.In contrast to today's relatively fuel-efficient, turbofan-powered air travel, first generation jet airliner travel was noisy and fuel inefficient...
capable of carrying nearly twice as many passengers as previous models. To build the giant jet, Boeing had to construct a facility large enough to handle the world's largest commercial jetliner. Land just north of Paine Field was chosen to construct the new facilities, including some development on the airport itself. Both the local government and the FAA concurred with the development. Work on the massive building began in August 1966 and the first employees arrived in early 1967. The 747 made its first flight at Paine Field on February 9, 1969.

In late 2005, construction of the Future of Flight Aviation Center & Boeing Tour
Future of Flight Aviation Center & Boeing Tour
The Future of Flight Aviation Center is an aviation museum and education center located at the northwest corner of Paine Field in Mukilteo, Washington. It is the starting point for the Boeing Tour, a tour of a portion of Boeing's Everett, Washington production facility in which the models 747,...
building was completed. The project, formerly known as the National Flight Interpretive Center, includes the Boeing factory tour as well as a gallery that highlights the newest developments in aviation; including both parts and components of airplanes manufactured by Airbus
Airbus
Airbus SAS is an aircraft manufacturing subsidiary of EADS, a European aerospace company. Based in Blagnac, France, surburb of Toulouse, and with significant activity across Europe, the company produces around half of the world's jet airliners....
and Boeing
Boeing
The Boeing Company is an American multinational aerospace and defense corporation, founded in 1916 by William E. Boeing in Seattle, Washington. Boeing has expanded over the years, merging with McDonnell Douglas in 1997. Boeing Corporate headquarters has been in Chicago, Illinois since 2001...
. The facility was opened to private audience on December 16, 2005, the following day the facility was open to the public. The Museum of Flight
Museum of Flight
The Museum of Flight is a private non-profit air and space museum at King County International Airport , south of downtown Seattle, Washington. It was established in 1965 and is fully accredited by the American Association of Museums...
also has a restoration center at the airport's main gate; located further south is the Me 262 Project
Me 262 Project
The Me 262 Project is a company formed to build flyable reproductions of the Messerschmitt Me 262, the world's first operational jet fighter. The project was started with the Texas Airplane Factory and administered by Classic Fighter Industries. It is based at Paine Field in Everett, Washington,...
. Paul Allen
Paul Allen
Paul Gardner Allen is an American business magnate, investor, and philanthropist. Allen co-founded Microsoft with Bill Gates...
's Flying Heritage Collection
Flying Heritage Collection
The Flying Heritage Collection is Paul G. Allen's collection of rare military aircraft, which comprises examples from Germany, Japan, Russia, the United Kingdom and the United States...
has a large, refurbished hangar at the south end of the field, which opened as a museum June 2008. Historic Flight Foundation also houses and maintains early military aircraft.

The use and expansion of the airport is currently governed by an agreement that was forged during 1978–1979 negotiations, called the Mediated Role Determination (MRD). The MRD recommends the role of Paine Field to be as a general aviation and aerospace manufacturing airport (Page A-3 Paragraph 1), while discouraging other types of activities including supplemental/charter air passenger service (Page A-3 Paragraph 6).

In 2005 Snohomish County
Snohomish County, Washington
Snohomish County is a county located in the U.S. state of Washington. It is named after the Snohomish tribe. Since 2000, the county's population has grown from 606,024 to 713,335 residents , making it one of the fastest-growing in the state, ranking third in overall population after King and...
commissioned a panel to review the MRD, and in conclusion suggested the MRD "should not be ratified or revised, but should be retired as a policy document". In June 2008 the Snohomish County Council rejected the findings of the panel, and as in 1989, 1992 & 2001, restated its opposition to commercial air passenger services operating from Paine Field. The council stated:


Reaffirm our county's commitment to preserving the existing general aviation role of Paine Field, and [to] pursue any and all lawful and appropriate means to discourage any action that would facilitate, directly or indirectly, use of Paine Field for scheduled air passenger service or air cargo service, which may include an interlocal agreement.

In 2008 two airlines, Allegiant Air
Allegiant Air
Allegiant Air is an American low-cost airline owned by Allegiant Travel Co. that operates scheduled and charter flights. Allegiant Travel Company is a publicly traded company with 1,300 employees and one billion USD market capitalization...
and Horizon Air
Horizon Air
Horizon Air Industries, Inc. is a regional low-cost airline based in SeaTac, Washington, United States. It is the eighth largest regional airline in the USA, serving 52 cities in the United States, Canada and Mexico....
, expressed interest in establishing passenger flights to Paine Field to the airport authority. In May 2008, in response to these requests, the Chairman of the Snohomish County Council sent Allegiant Air a letter stating their opposition to the request to start air service.

The FAA in June 2008, in receipt of correspondence between Allegiant Air and Snohomish County and county executives, wrote the airport authority to reiterate that a recipient of federal FAA grants requires the County to not discriminate against commercial aeronautical activities offering services to the public, or risk an enforcement action under FAR 16
Federal Aviation Regulations
The Federal Aviation Regulations, or FARs, are rules prescribed by the Federal Aviation Administration governing all aviation activities in the United States. The FARs are part of Title 14 of the Code of Federal Regulations...
. The FAA also stated that it would reasonably expect the airport operator to change the existing Class IV Airport operating certificate
Operating certificate
Operating certificate is a category of license issued by a government agency allowing an individual or company to provide a controlled type of service. These certificates are generally issued for a limited time period...
(AOC) to a Class I AOC in the event that Allegiant Air can secure facilities and/or land at the airport.

The airport is currently conducting an environmental assessment of the effects of commercial aviation at Paine Field. A draft of the study was finished in December 2009, and the public comment period ended on February 5, 2010. Opposition to Paine Field hosting commercial air service was overwhelming in meetings held for comments on the draft environmental assessment. The neighboring city of Mukilteo has hired aviation attorney Barbara Lichman of the firm Chevalier, Allen & Lichman of Costa Mesa, California. to represent the interests of the city during the environmental assessment and to stop the destruction of neighborhoods near the airport. In addition Mukilteo has promised to "make it time consuming, expensive and stretch it out. We'll fight the terminal legally." The FAA expects it will be June 2010 before they will be finished responding to the comments.