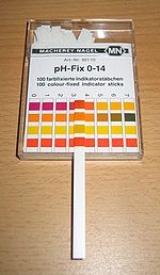 Encyclopedia
A pH indicator is a halochromic
Halochromism
A halochromic material is a material which changes colour when pH changes occur. The term ‘chromic’ is defined as materials that can change colour reversibly with the presence of a factor. In this case, the factor is pH...
chemical compound
Chemical compound
A chemical compound is a pure chemical substance consisting of two or more different chemical elements that can be separated into simpler substances by chemical reactions. Chemical compounds have a unique and defined chemical structure; they consist of a fixed ratio of atoms that are held together...
that is added in small amounts to a solution
Solution
In chemistry, a solution is a homogeneous mixture composed of only one phase. In such a mixture, a solute is dissolved in another substance, known as a solvent. The solvent does the dissolving.- Types of solutions :...
so that the pH
PH
In chemistry, pH is a measure of the acidity or basicity of an aqueous solution. Pure water is said to be neutral, with a pH close to 7.0 at . Solutions with a pH less than 7 are said to be acidic and solutions with a pH greater than 7 are basic or alkaline...
(acid
Acid
An acid is a substance which reacts with a base. Commonly, acids can be identified as tasting sour, reacting with metals such as calcium, and bases like sodium carbonate. Aqueous acids have a pH of less than 7, where an acid of lower pH is typically stronger, and turn blue litmus paper red...
ity or basicity
Base (chemistry)
For the term in genetics, see base A base in chemistry is a substance that can accept hydrogen ions or more generally, donate electron pairs. A soluble base is referred to as an alkali if it contains and releases hydroxide ions quantitatively...
) of the solution can be determined visually. Hence a pH indicator is a chemical detector for hydronium
Hydronium
In chemistry, a hydronium ion is the cation , a type of oxonium ion produced by protonation of water. This cation is often used to represent the nature of the proton in aqueous solution, where the proton is highly solvated...
ions (H3O+) or hydrogen ions (H+) in the Arrhenius model
Acid-base reaction theories
An acid–base reaction is a chemical reaction that occurs between an acid and a base. Several concepts that provide alternative definitions for the reaction mechanisms involved and their application in solving related problems exist...
. Normally, the indicator causes the colour of the solution to change depending on the pH. At 25° Celsius, considered the standard temperature, the pH value of a neutral solution is 7.0. Solutions with a pH value below 7.0 are considered acidic, whereas solutions with pH value above 7.0 are basic. As most naturally occurring organic compounds are weak protolytes, carboxylic acid
Carboxylic acid
Carboxylic acids are organic acids characterized by the presence of at least one carboxyl group. The general formula of a carboxylic acid is R-COOH, where R is some monovalent functional group...
s and amine
Amine
Amines are organic compounds and functional groups that contain a basic nitrogen atom with a lone pair. Amines are derivatives of ammonia, wherein one or more hydrogen atoms have been replaced by a substituent such as an alkyl or aryl group. Important amines include amino acids, biogenic amines,...
s, pH indicators find many applications in biology and analytical chemistry. Moreover, pH indicators form one of the three main types of indicator compounds used in chemical analysis. For the quantitative analysis of metal cations, the use of complexometric indicator
Complexometric indicator
A complexometric indicator is an ionochromic dye that undergoes a definite color change in presence of specific metal ions. It forms a weak complex with the ions present in the solution, which has a significantly different color from the form existing outside the complex.Complexometric indicators...
s is preferred, whereas the third compound class, the redox indicator
Redox indicator
A redox indicator is an indicator that undergoes a definite color change at a specific electrode potential....
s, are used in titrations involving a redox reaction as the basis of the analysis.

In and of themselves, pH indicators are frequently weak acids or weak bases. The general reaction scheme of a pH indicator can be formulated as follows:

Usually, the color change is not instantaneous at the pKa value, but there is a pH range where a mixture of colors is present. This pH range varies between indicators, but as a rule of thumb, it falls between the pKa value plus or minus one. This assumes that solutions retain their color as long as at least 10% of the other species persists. For example, if the concentration of the conjugate base is ten times greater than the concentration of the acid, their ratio is 10:1, and consequently the pH is pKa + 1. Conversely, if there is a tenfold excess of the acid with respect to the base, the ratio is 1:10 and the pH is pKa – 1.

For optimal accuracy, the color difference between the two species should be as clear as possible, and the narrower the pH range of the color change the better. In some indicators, such as phenolphthalein
Phenolphthalein
Phenolphthalein is a chemical compound with the formula C20H14O4 and is often written as "HIn" or "phph" in shorthand notation. Often used in titrations, it turns colorless in acidic solutions and pink in basic solutions...
, one of the species is colorless, whereas in other indicators, such as methyl red
Methyl red
Methyl red, also called C.I. Acid Red 2, is an indicator dye that turns red in acidic solutions. It is an azo dye, and is a dark red crystalline powder....
, both species confer a color. While pH indicators work efficiently at their designated pH range, they are usually destroyed at the extreme ends of the pH scale due to undesired side-reactions.

pH indicators are frequently employed in titration
Titration
Titration, also known as titrimetry, is a common laboratory method of quantitative chemical analysis that is used to determine the unknown concentration of an identified analyte. Because volume measurements play a key role in titration, it is also known as volumetric analysis. A reagent, called the...
s in analytic chemistry
Chemistry
Chemistry is the science of matter, especially its chemical reactions, but also its composition, structure and properties. Chemistry is concerned with atoms and their interactions with other atoms, and particularly with the properties of chemical bonds....
and biology
Biology
Biology is a natural science concerned with the study of life and living organisms, including their structure, function, growth, origin, evolution, distribution, and taxonomy. Biology is a vast subject containing many subdivisions, topics, and disciplines...
experiments to determine the extent of a chemical reaction
Chemical reaction
A chemical reaction is a process that leads to the transformation of one set of chemical substances to another. Chemical reactions can be either spontaneous, requiring no input of energy, or non-spontaneous, typically following the input of some type of energy, such as heat, light or electricity...
. Because of the subjective
Subjectivity
Subjectivity refers to the subject and his or her perspective, feelings, beliefs, and desires. In philosophy, the term is usually contrasted with objectivity.-Qualia:...
determination of color, pH indicators are susceptible to imprecise readings. For applications requiring precise measurement of pH, a pH meter
PH meter
A pH meter is an electronic instrument used for measuring the pH of a liquid...
is frequently used.

Tabulated below are several common laboratory pH indicators. Indicators usually exhibit intermediate colors at pH values inside the listed transition range. For example, phenol red exhibits an orange color between pH 6.8 and pH 8.4. The transition range may shift slightly depending on the concentration of the indicator in the solution and on the temperature at which it is used. 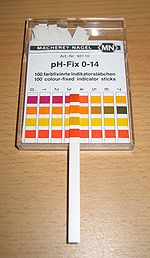 Many plants or plant parts contain chemicals from the naturally-colored anthocyanin
Anthocyanin
Anthocyanins are water-soluble vacuolar pigments that may appear red, purple, or blue according to pH...
family of compounds. They are red in acidic solutions and blue in basic. Extracting anthocyanins from red cabbage
Red Cabbage
The red cabbage is a sort of cabbage, also known as Red Kraut or Blue Kraut after preparation....
leaves or the skin of a lemon
Lemon
The lemon is both a small evergreen tree native to Asia, and the tree's ellipsoidal yellow fruit. The fruit is used for culinary and non-culinary purposes throughout the world – primarily for its juice, though the pulp and rind are also used, mainly in cooking and baking...
to form a crude acid-base indicator is a popular introductory chemistry demonstration.

Anthocyanins can be extracted from a multitude of colored plants or plant parts, including from leaves (red cabbage
Cabbage
Cabbage is a popular cultivar of the species Brassica oleracea Linne of the Family Brassicaceae and is a leafy green vegetable...
); flowers (geranium
Pelargonium
Pelargonium is a genus of flowering plants which includes about 200 species of perennials, succulents, and shrubs, commonly known as scented geraniums or storksbills. Confusingly, Geranium is the correct botanical name of a separate genus of related plants often called Cranesbills. Both Geranium...
, poppy
Poppy
A poppy is one of a group of a flowering plants in the poppy family, many of which are grown in gardens for their colorful flowers. Poppies are sometimes used for symbolic reasons, such as in remembrance of soldiers who have died during wartime....
, or rose
Rose
A rose is a woody perennial of the genus Rosa, within the family Rosaceae. There are over 100 species. They form a group of erect shrubs, and climbing or trailing plants, with stems that are often armed with sharp prickles. Flowers are large and showy, in colours ranging from white through yellows...
petals); berries (blueberries
Blueberry
Blueberries are flowering plants of the genus Vaccinium with dark-blue berries and are perennial...
, blackcurrant
Blackcurrant
Blackcurrant, Ribes nigrum, is a species of Ribes berry native to central and northern Europe and northern Asia, and is a perennial....
); and stems (rhubarb
Rhubarb
Rhubarb is a group of plants that belong to the genus Rheum in the family Polygonaceae. They are herbaceous perennial plants growing from short, thick rhizomes. They have large leaves that are somewhat triangular-shaped with long fleshy petioles...
).

Litmus
Litmus
Litmus or litmus test may refer to:* Litmus test, a common pH test* Litmus , a test case management tool maintained by Mozilla* "Litmus" , an episode in the first season of the television series...
, used by alchemists in the Middle Ages and still readily available, is a naturally occurring pH indicator made from a mixture of lichen
Lichen
Lichens are composite organisms consisting of a symbiotic organism composed of a fungus with a photosynthetic partner , usually either a green alga or cyanobacterium...
species, particularly Roccella tinctoria
Roccella tinctoria
Roccella tinctoria is a species of fungus in the genus Roccella, homotypic synonym of Lecanora tinctoria Czerwiak., 1849. It was first described by Augustin Pyramus de Candolle in 1805. It has the following varieties:...
. The word 'litmus' derives from 'coloured moss' in Old Norse
Old Norse
Old Norse is a North Germanic language that was spoken by inhabitants of Scandinavia and inhabitants of their overseas settlements during the Viking Age, until about 1300....
. The color changes between red in acid solutions and blue in alkalis. The term 'litmus test' has become a widely used metaphor for any test that purports to distinguish authoritatively between alternatives.