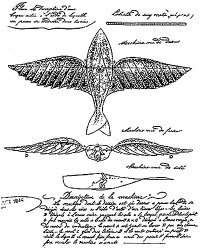 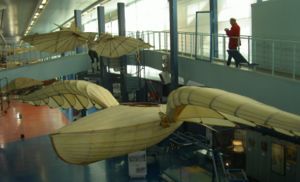 Jean-Marie Le Bris was a French
France
The French Republic , The French Republic , The French Republic , (commonly known as France , is a unitary semi-presidential republic in Western Europe with several overseas territories and islands located on other continents and in the Indian, Pacific, and Atlantic oceans. Metropolitan France...
aviator
Aviator
An aviator is a person who flies an aircraft. The first recorded use of the term was in 1887, as a variation of 'aviation', from the Latin avis , coined in 1863 by G. de la Landelle in Aviation Ou Navigation Aérienne...
, born in Concarneau
Concarneau
Concarneau is a commune in the Finistère department of Brittany in north-western France.The town has two distinct areas: the modern town on the mainland and the medieval Ville Close, a walled town on a long island in the centre of the harbour. Historically, the old town was a centre of shipbuilding...
, Brittany
Brittany
Brittany is a cultural and administrative region in the north-west of France. Previously a kingdom and then a duchy, Brittany was united to the Kingdom of France in 1532 as a province. Brittany has also been referred to as Less, Lesser or Little Britain...
, who accomplished a glider flight in December 1856.

A sailor and sea captain, Jean-Marie Le Bris sailed around the world observing the flight of the Albatross
Albatross
Albatrosses, of the biological family Diomedeidae, are large seabirds allied to the procellariids, storm-petrels and diving-petrels in the order Procellariiformes . They range widely in the Southern Ocean and the North Pacific...
bird. Although he sailed around the world, his true ambition was to fly. He caught some of the birds and analysed the interaction of their wings with air, identifying the aerodynamic
Aerodynamics
Aerodynamics is a branch of dynamics concerned with studying the motion of air, particularly when it interacts with a moving object. Aerodynamics is a subfield of fluid dynamics and gas dynamics, with much theory shared between them. Aerodynamics is often used synonymously with gas dynamics, with...
phenomenon of lift
Lift (force)
A fluid flowing past the surface of a body exerts a surface force on it. Lift is the component of this force that is perpendicular to the oncoming flow direction. It contrasts with the drag force, which is the component of the surface force parallel to the flow direction...
, which he called "aspiration".

Le Bris built a glider
Glider aircraft
Glider aircraft are heavier-than-air craft that are supported in flight by the dynamic reaction of the air against their lifting surfaces, and whose free flight does not depend on an engine. Mostly these types of aircraft are intended for routine operation without engines, though engine failure can...
, inspired by the shape of the Albatross bird and named L'Albatros artificiel ("The artificial Albatross"). During 1856 he flew briefly on the beach of Sainte-Anne-la-Palud (Plonévez-Porzay
Plonévez-Porzay
Plonévez-Porzay is a commune in the Finistère department in Bretagne in northwestern France.-Population:Inhabitants of Plonévez-Porzay are called Plonévéziens.-References:** -External links:* *...
, Finistère
Finistère
Finistère is a département of France, in the extreme west of Brittany.-History:The name Finistère derives from the Latin Finis Terræ, meaning end of the earth, and may be compared with Land's End on the opposite side of the English Channel...
), by being pulled by a running horse, facing towards the wind so that people can not say he flew using the wind.
He thus flew higher than his point of departure, a first for heavier-than-air flying machines, reportedly to a height of 100 m (330 ft), for a distance of 200 m (660 ft).

In 1868, with the support of the French Navy
French Navy
The French Navy, officially the Marine nationale and often called La Royale is the maritime arm of the French military. It includes a full range of fighting vessels, from patrol boats to a nuclear powered aircraft carrier and 10 nuclear-powered submarines, four of which are capable of launching...
, he built a second flying machine, which he tried three times in Brest
Brest, France
Brest is a city in the Finistère department in Brittany in northwestern France. Located in a sheltered position not far from the western tip of the Breton peninsula, and the western extremity of metropolitan France, Brest is an important harbour and the second French military port after Toulon...
without great success. It was almost identical to his first flying machine, except that it was lighter and had a system to shift weight distribution. His flying machine became the first ever to be photographed, albeit on the ground, by Nadar
Nadar (photographer)
Félix Nadar was the pseudonym of Gaspard-Félix Tournachon , a French photographer, caricaturist, journalist, novelist and balloonist. Some photographs by Nadar are marked "P. Nadar" for "Photographie Nadar" .-Life: born in April 1820 in Paris...
in 1868, although the first well-documented glider was built by George Cayley
George Cayley
Sir George Cayley, 6th Baronet was a prolific English engineer and one of the most important people in the history of aeronautics. Many consider him the first true scientific aerial investigator and the first person to understand the underlying principles and forces of flight...
and flown by an employee during 1853 (see First flying machine
First flying machine
There are conflicting views as to what was the first flying machine.Much of the debate surrounding records of early flying machines depends on the exact definition of what constitutes a "flying machine", "flight", and even "first"....
for sketchy reports of earlier attempts). Also in Great Britain, Stringfellow
John Stringfellow
John Stringfellow was born in Sheffield, England and is known for his work on the Aerial Steam Carriage with William Samuel Henson....
had built small unmanned gliders during 1848. However Le Bris invented more effective flight controls, which could act on the incidence
Angle of incidence
Angle of incidence is a measure of deviation of something from "straight on", for example:* in the approach of a ray to a surface, or* the angle at which the wing or horizontal tail of an airplane is installed on the fuselage, measured relative to the axis of the fuselage.-Optics:In geometric...
of wings and which were patented during March 1857.