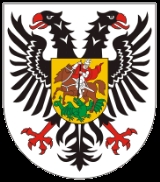 The district was created in 1973 by merging the districts of Kehl, Lahr, Offenburg, Wolfach and the southern part of the district of Bühl.

The western part of the district is located in the Upper Rhine
Upper Rhine
The Upper Rhine is the section of the Rhine in the Upper Rhine Plain between Basel, Switzerland and Bingen, Germany. The river is marked by Rhine-kilometers 170 to 529 ....
Valley, the eastern part belongs to the northern Black Forest
Black Forest
The Black Forest is a wooded mountain range in Baden-Württemberg, southwestern Germany. It is bordered by the Rhine valley to the west and south. The highest peak is the Feldberg with an elevation of 1,493 metres ....
. The highest elevation of the district, the Hornisgrinde
Hornisgrinde
The Hornisgrinde, 1164 m , is the highest mountain in the Northern Black Forest of Germany. The Hornisgrinde lies in northern Ortenaukreis district.- Origin of the name :...
(1164 m), is located in the north-east of the district. The lowest elevation (124.3 m) is in the Rhine valley to the north. The district is named after the historical territory of the Ortenau
Ortenau
The Ortenau is a historical territory in Baden-Württemberg, located on the right bank of the River Rhine. It covers approximately the same area as the Ortenaukreis, a present-day district....
.

The district has a friendship with the Altenburger Land
Altenburger Land
Altenburger Land is a district in Thuringia, Germany. It is bounded by the district of Greiz, the Burgenlandkreis , and the districts Leipziger Land, Mittweida, Chemnitzer Land, Zwickauer Land in Saxony.- History :...
district in Thuringia
Thuringia
The Free State of Thuringia is a state of Germany, located in the central part of the country.It has an area of and 2.29 million inhabitants, making it the sixth smallest by area and the fifth smallest by population of Germany's sixteen states....
. Offenburg district already had a city partnership with Altenburg
Altenburg
Altenburg is a town in the German federal state of Thuringia, 45 km south of Leipzig. It is the capital of the Altenburger Land district.-Geography:...
so, after German reunification
German reunification
German reunification was the process in 1990 in which the German Democratic Republic joined the Federal Republic of Germany , and when Berlin reunited into a single city, as provided by its then Grundgesetz constitution Article 23. The start of this process is commonly referred by Germans as die...
in 1990, Ortenaukreis chose to help modernize the Altenburger Land administration to the West German standard.

France
France
The French Republic , The French Republic , The French Republic , (commonly known as France , is a unitary semi-presidential republic in Western Europe with several overseas territories and islands located on other continents and in the Indian, Pacific, and Atlantic oceans. Metropolitan France...
and Germany
Germany
Germany , officially the Federal Republic of Germany , is a federal parliamentary republic in Europe. The country consists of 16 states while the capital and largest city is Berlin. Germany covers an area of 357,021 km2 and has a largely temperate seasonal climate...
have created the Strasbourg-Ortenau
Strasbourg-Ortenau
Strasbourg-Ortenau is a Franco-German eurodistrict, a cross-border administrative entity sharing common institutions, established on 17 October 2005 and definitely functional since 4 February 2010...
eurodistrict
Eurodistrict
A eurodistrict is a European administrative entity that contains urban agglomerations which lie across the border between two or more states. A eurodistrict offers a program for cooperation and integration of the towns or communes which it comprises: for example, improving transport links for...
straddling the Rhine and combining Ortenaukreis and Greater Strasbourg
Strasbourg
Strasbourg is the capital and principal city of the Alsace region in eastern France and is the official seat of the European Parliament. Located close to the border with Germany, it is the capital of the Bas-Rhin département. The city and the region of Alsace are historically German-speaking,...
, with an overall population of 860,000.