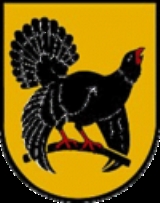 The district was created in 1938 as the successor of the Oberamt Freudenstadt which dates back to 1806. In 1973 it was merged with the majority of the neighboring district Horb, and some small parts of the districts Wolfach and Hechingen.

The district is located in the middle part of the Black Forest
Black Forest
The Black Forest is a wooded mountain range in Baden-Württemberg, southwestern Germany. It is bordered by the Rhine valley to the west and south. The highest peak is the Feldberg with an elevation of 1,493 metres ....
mountains. The river Neckar
Neckar
The Neckar is a long river, mainly flowing through the southwestern state of Baden-Württemberg, but also a short section through Hesse, in Germany. The Neckar is a major right tributary of the River Rhine...
flows through the southeast of the district.