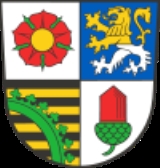 The region on the Pleiße River was part of a huge forest, which was settled by Slavic peoples
Slavic peoples
The Slavic people are an Indo-European panethnicity living in Eastern Europe, Southeast Europe, North Asia and Central Asia. The term Slavic represents a broad ethno-linguistic group of people, who speak languages belonging to the Slavic language family and share, to varying degrees, certain...
. The castle of Altenburg already existed in the 10th century. In the following centuries German settlers occupied the region. It was part of the margravate of Meißen in the 14th century. At this time most of the forests were cleared.

The city of Altenburg and the surrounding lands were the tiny duchy of Saxe-Altenburg
Saxe-Altenburg
Saxe-Altenburg was one of the Saxon duchies held by the Ernestine branch of the Wettin dynasty in present-day Thuringia.-History:The duchy originated from the medieval Burgraviate of Altenburg in the Imperial Pleissnerland , a possession of the Wettin Margraves of Meissen since 1243...
from 1826 to 1918; afterwards it was a state within the Weimar Republic
Weimar Republic
The Weimar Republic is the name given by historians to the parliamentary republic established in 1919 in Germany to replace the imperial form of government...
for a short time, before it was dissolved in 1922 in order to join the state of Thuringia.

Altenburger Land is the easternmost district of Thuringia. It is a mainly agricultural region. The main river is the Pleiße
Pleiße
The Pleiße is a right tributary of the Weiße Elster in Saxony, Germany. It has its source southwest of Zwickau at Ebersbrunn, then flows through Werdau, Crimmitschau, Altenburg, and other cities in Saxony and Thuringia, before meeting the Weiße Elster in Leipzig.The river naturally had a length of...
, an affluent of the Weiße Elster
Weiße Elster
The White Elster or Weisse Elster is a long river in central Europe, right tributary of the Saale. Its source is in the westernmost part of the Czech Republic, near Aš. After a few kilometres, it flows into eastern Germany...
, crossing the district from south to north. The hilly Osterland
Osterland
Osterland is a historical region in Germany. It was situated between the Elbe and Saale rivers to the north of Pleissnerland which it later absorbed and it included the city of Leipzig...
constituting the northernmost foothills of the Ore Mountains slopes gently away to the plains of eastern Saxony-Anhalt.