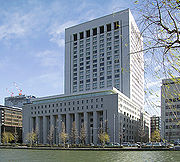 Supreme Commander of the Allied Powers (SCAP) was the title held by General Douglas MacArthur
Douglas MacArthur
General of the Army Douglas MacArthur was an American general and field marshal of the Philippine Army. He was a Chief of Staff of the United States Army during the 1930s and played a prominent role in the Pacific theater during World War II. He received the Medal of Honor for his service in the...
during the Occupation of Japan following World War II
World War II
World War II, or the Second World War , was a global conflict lasting from 1939 to 1945, involving most of the world's nations—including all of the great powers—eventually forming two opposing military alliances: the Allies and the Axis...
. Although subsequently there were, and continue to exist, other Supreme Allied Commander
Supreme Allied Commander
Supreme Allied Commander is the title held by the most senior commander within certain multinational military alliances. It originated as a term used by the Western Allies during World War II, and is currently used only within NATO. Dwight Eisenhower served as Supreme Commander Allied Expeditionary...
s, the SCAP title per se has only ever been given to MacArthur.

In Japan
Japan
Japan is an island nation in East Asia. Located in the Pacific Ocean, it lies to the east of the Sea of Japan, China, North Korea, South Korea and Russia, stretching from the Sea of Okhotsk in the north to the East China Sea and Taiwan in the south...
, the position was generally referred to as GHQ (General Headquarters), as SCAP also referred to the offices of the occupation, including a staff of several hundred U.S.
United States
The United States of America is a federal constitutional republic comprising fifty states and a federal district...
civil servants as well as military
Military
A military is an organization authorized by its greater society to use lethal force, usually including use of weapons, in defending its country by combating actual or perceived threats. The military may have additional functions of use to its greater society, such as advancing a political agenda e.g...
personnel. Some of these personnel effectively wrote a first draft of the Japanese Constitution
Constitution of Japan
The is the fundamental law of Japan. It was enacted on 3 May, 1947 as a new constitution for postwar Japan.-Outline:The constitution provides for a parliamentary system of government and guarantees certain fundamental rights...
, which the Diet
Diet of Japan
The is Japan's bicameral legislature. It is composed of a lower house, called the House of Representatives, and an upper house, called the House of Councillors. Both houses of the Diet are directly elected under a parallel voting system. In addition to passing laws, the Diet is formally...
then ratified after a few amendments. Australia
Australia
Australia , officially the Commonwealth of Australia, is a country in the Southern Hemisphere comprising the mainland of the Australian continent, the island of Tasmania, and numerous smaller islands in the Indian and Pacific Oceans. It is the world's sixth-largest country by total area...
n, British
United Kingdom
The United Kingdom of Great Britain and Northern IrelandIn the United Kingdom and Dependencies, other languages have been officially recognised as legitimate autochthonous languages under the European Charter for Regional or Minority Languages...
, Indian, Canadian, and New Zealand
New Zealand
New Zealand is an island country in the south-western Pacific Ocean comprising two main landmasses and numerous smaller islands. The country is situated some east of Australia across the Tasman Sea, and roughly south of the Pacific island nations of New Caledonia, Fiji, and Tonga...
forces under SCAP were organized into a sub-command known as British Commonwealth Occupation Force
British Commonwealth Occupation Force
The British Commonwealth Occupation Force , was the name of the joint Australian, Canadian, British, Indian and New Zealand military forces in occupied Japan, from 21 February 1946 until the end of occupation in 1952...
.

These actions led MacArthur to be viewed as the new Imperial force in Japan by many Japanese political and civilian figures, even being considered to be the rebirth of the Shogun style government which Japan was ruled under until the start of the Meiji Restoration Period.


Immunity given to Imperial family and bacteriological research units members

Douglas MacArthur
Douglas MacArthur
General of the Army Douglas MacArthur was an American general and field marshal of the Philippine Army. He was a Chief of Staff of the United States Army during the 1930s and played a prominent role in the Pacific theater during World War II. He received the Medal of Honor for his service in the...
and his SCAP staff played a primary role to exonerate Emperor Shōwa (Hirohito) and all members of the imperial family implicated in the war such as Prince Chichibu
Prince Chichibu
, also known as Prince Yasuhito, was the second son of Emperor Taishō and a younger brother of the Emperor Shōwa. As a member of the Imperial House of Japan, he was the patron of several sporting, medical, and international exchange organizations...
, Prince Tsuneyoshi Takeda, Prince Asaka
Prince Asaka
of Japan, was the founder of a collateral branch of the Japanese imperial family and a career officer in the Imperial Japanese Army. Son-in-law of Emperor Meiji and uncle by marriage of Emperor Shōwa , Prince Asaka was commander of Japanese forces in the final assault on Nanking , then the capital...
, Prince Higashikuni
Prince Higashikuni
was the 43rd Prime Minister of Japan from 17 August 1945 to 9 October 1945 for a period of 54 days. An uncle of Emperor Hirohito twice over, Prince Higashikuni was the only member of the Japanese imperial family to head a cabinet...
and Prince Hiroyasu Fushimi from criminal prosecutions before the Tokyo tribunal.

As soon as 26 November 1945, MacArthur confirmed to admiral Mitsumasa Yonai
Mitsumasa Yonai
was an admiral in the Imperial Japanese Navy, and politician. He was the 37th Prime Minister of Japan from 16 January to 22 July 1940.-Early life & Naval career:...
that the emperor's abdication would not be necessary. Before the war crimes trials actually convened, SCAP, the IPS and Shōwa officials worked behind the scenes not only to prevent the imperial family being indicted, but also to slant the testimony of the defendants to ensure that no one implicated the Emperor. High officials in court circles and the Shōwa government collaborated with allied GHQ in compiling lists of prospective war criminals, while the individuals arrested as Class A suspects and incarcerated in Sugamo Prison
Sugamo Prison
Sugamo Prison was located in the district of Ikebukuro, which is now part of the Toshima ward of Tokyo, Japan-History:...
solemnly vowed to protect their sovereign against any possible taint of war responsibility.

As Supreme Commander of the Allied Powers, MacArthur also gave immunity
Immunity from prosecution (international law)
Immunity from prosecution is a doctrine of international law that allows an accused to avoid prosecution for criminal offences. Immunities are of two types. The first is functional immunity, or immunity ratione materiae. This is an immunity granted to people who perform certain functions of...
to Shiro Ishii
Shiro Ishii
was a Japanese microbiologist and the lieutenant general of Unit 731, a biological warfare unit of the Imperial Japanese Army responsible for human experimentation and war crimes during the Second Sino-Japanese War.-Early years:...
and all members of the bacteriological research units
Unit 731
was a covert biological and chemical warfare research and development unit of the Imperial Japanese Army that undertook lethal human experimentation during the Second Sino-Japanese War and World War II. It was responsible for some of the most notorious war crimes carried out by Japanese...
in exchange for germ warfare data based on human experimentation
Human experimentation
Human subject research includes experiments and observational studies. Human subjects are commonly participants in research on basic biology, clinical medicine, nursing, psychology, and all other social sciences. Humans have been participants in research since the earliest studies...
. On 6 May 1947, he wrote to Washington that "additional data, possibly some statements from Ishii probably can be obtained by informing Japanese involved that information will be retained in intelligence channels and will not be employed as "War Crimes" evidence." The deal was concluded in 1948.

According to popular historian Herbert Bix in Hirohito and the Making of Modern Japan, "MacArthur's truly extraordinary measures to save the Emperor from trial as a war criminal had a lasting and profoundly distorting impact on Japanese understanding of the lost war."

Toward the end of the occupation, Emperor Shōwa let it be known to SCAP that he was prepared to apologize formally to U.S. Gen. MacArthur for Japan's actions during World War II – including an apology for the December 7, 1941 attack on Pearl Harbor
Pearl Harbor
Pearl Harbor, known to Hawaiians as Puuloa, is a lagoon harbor on the island of Oahu, Hawaii, west of Honolulu. Much of the harbor and surrounding lands is a United States Navy deep-water naval base. It is also the headquarters of the U.S. Pacific Fleet...
.

Patrick Lennox Tierney
Patrick Lennox Tierney
Patrick Lennox Tierney is a Japanologist academic in the field of art history, an emeritus professor of the University of Utah, a former Curator of Japanese Art at the Utah Museum of Fine Arts, a former Director of the Pacific Asia Museum, and a former Commissioner of Art and Monuments during the...
had an intimate perspective on events which unfolded in SCAP headquarters. Tierney's office was on the fifth floor of the Dai-Ichi Insurance Building
DN Tower 21
DN Tower 21 is an office building in Tokyo, Japan. It includes the former Dai-Ichi Seimei Building, in which Douglas MacArthur had his headquarters during the occupation of Japan following World War II. The Government of Tokyo has designated DN Tower 21 as a historical building.-External links:*...
in Tokyo, the same floor where MacArthur's suite of offices was located. He was there on the day the Emperor came to offer this apology; but when the emperor arrived, MacArthur refused to admit him or acknowledge him. A pivotal moment passed. Many years later, Tierney made an effort to explain his understanding of the significance of what he had personally witnessed: "Apology is a very important thing in Japan." Issues which might have been addressed were allowed to remain open, and consequences unfolded across the decades which followed.

Above the political and economic control SCAP had for the seven years following Japan’s surrender, SCAP also had strict control over all of the Japanese media, under the formation of the Civil Censorship Detachment of SCAP. The CCD eventually banned a total of 31 topics from all forms of media. These topics included:


Although some of the CCD censorship laws considerably relaxed towards the end of SCAP, some topics, like the atomic bomb, were taboo until 1952 at the end of the occupation.

MacArthur was succeeded as SCAP by General Matthew Ridgway
Matthew Ridgway
Matthew Bunker Ridgway was a United States Army General. He held several major commands and was most famous for resurrecting the United Nations war effort during the Korean War. Several historians have credited Ridgway for turning around the war in favor of the UN side...
when MacArthur was relieved by President
President
A president is a leader of an organization, company, trade union, university, or country.Etymologically, a president is one who presides, who sits in leadership...
Harry Truman for insubordination
Insubordination
Insubordination is the act of willfully disobeying an authority. Refusing to perform an action that is unethical or illegal is not insubordination; neither is refusing to perform an action that is not within the scope of authority of the person issuing the order.Insubordination is typically a...
concerning the Korean War
Korean War
The Korean War was a conventional war between South Korea, supported by the United Nations, and North Korea, supported by the People's Republic of China , with military material aid from the Soviet Union...
in April 1951. With the peace treaty with Japan
Treaty of San Francisco
The Treaty of Peace with Japan , between Japan and part of the Allied Powers, was officially signed by 48 nations on September 8, 1951, at the War Memorial Opera House in San Francisco, California...
, the post of SCAP lapsed.