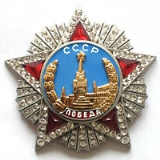 Encyclopedia
The Order of Victory was the highest military decoration
Military decoration
A military decoration is a decoration given to military personnel or units for heroism in battle or distinguished service. They are designed to be worn on military uniform....
in the Soviet Union
Soviet Union
The Soviet Union , officially the Union of Soviet Socialist Republics , was a constitutionally socialist state that existed in Eurasia between 1922 and 1991....
, and one of the rarest orders in the world. The order was awarded only to Generals and Marshals for successfully conducting combat operations involving one or more army groups and resulting in a "successful operation within the framework of one or several fronts resulting in a radical change of the situation in favor of the Red Army
Red Army
The Workers' and Peasants' Red Army started out as the Soviet Union's revolutionary communist combat groups during the Russian Civil War of 1918-1922. It grew into the national army of the Soviet Union. By the 1930s the Red Army was among the largest armies in history.The "Red Army" name refers to...
." In its history, it has been awarded twenty times to thirteen Soviet leaders and five foreign leaders, with one revocation.

The order was proposed by Colonel N. S. Neyelov, who was serving at the Soviet Army Rear headquarters around June 1943. The original name that Colonel Neyelov suggested was Order for Faithfulness to the Homeland; however, it was given its present name around October of that year. The order was officially adopted on November 8, 1943. The first awarding of the order was on April 10, 1944 and it was presented to Marshalls Aleksandr Vasilevsky
Aleksandr Vasilevsky
Aleksandr Mikhaylovich Vasilevsky was a Russian career officer in the Red Army, promoted to Marshal of the Soviet Union in 1943. He was the Chief of the General Staff of the Soviet Armed Forces and Deputy Minister of Defense during World War II, as well as Minister of Defense from 1949 to 1953...
and Georgy Zhukov
Georgy Zhukov
Marshal of the Soviet Union Georgy Konstantinovich Zhukov , was a Russian career officer in the Red Army who, in the course of World War II, played a pivotal role in leading the Red Army through much of Eastern Europe to liberate the Soviet Union and other nations from the Axis Powers' occupation...
, and Joseph Stalin
Joseph Stalin
Joseph Vissarionovich Stalin was the Premier of the Soviet Union from 6 May 1941 to 5 March 1953. He was among the Bolshevik revolutionaries who brought about the October Revolution and had held the position of first General Secretary of the Communist Party of the Soviet Union's Central Committee...
as Commander-in-Chief of the Soviet Armed Forces. The order was also bestowed to top commanders of the Allied forces. Every order was presented during World War II
World War II
World War II, or the Second World War , was a global conflict lasting from 1939 to 1945, involving most of the world's nations—including all of the great powers—eventually forming two opposing military alliances: the Allies and the Axis...
, except for the 1978 award to Leonid Brezhnev
Leonid Brezhnev
Leonid Ilyich Brezhnev  – 10 November 1982) was the General Secretary of the Central Committee of the Communist Party of the Soviet Union , presiding over the country from 1964 until his death in 1982. His eighteen-year term as General Secretary was second only to that of Joseph Stalin in...
. Brezhnev's award was revoked posthumously in 1989 for not meeting the requirements for the award.

Like other orders awarded by Communist nations, the Order of Victory could be awarded more than once to the same individual. In total, the order was presented twenty times to seventeen people (including Brezhnev).

Unlike all other Soviet orders, the Order of Victory had no serial number on it, the number was only mentioned in the award certificate. After a holder of the Order of Victory died, the award was to be given back to the state. The awards are now preserved by the Diamond Fund
Diamond Fund
Diamond Fund is a unique collection of gems, jewelry and natural nuggets, stored and exhibited in Moscow Kremlin, Russia. The Fund dates back to the Russian Crown treasury instituted by emperor Peter I of Russia in 1719.-Imperial treasury:...
in the Moscow Kremlin. Notable exceptions are Dwight D. Eisenhower's Order of Victory, which is on display at the United States National Archives Building in Washington D.C., and Field Marshal Bernard Montgomery's Order of Victory, which is on display at the Imperial War Museum
Imperial War Museum
Imperial War Museum is a British national museum organisation with branches at five locations in England, three of which are in London. The museum was founded during the First World War in 1917 and intended as a record of the war effort and sacrifice of Britain and her Empire...
in London.

The Order is made out of platinum
Platinum
Platinum is a chemical element with the chemical symbol Pt and an atomic number of 78. Its name is derived from the Spanish term platina del Pinto, which is literally translated into "little silver of the Pinto River." It is a dense, malleable, ductile, precious, gray-white transition metal...
in the form of a pentangular star with rays between the arms, measuring 72 mm in diameter. The star is studded with 174 diamond
Diamond
In mineralogy, diamond is an allotrope of carbon, where the carbon atoms are arranged in a variation of the face-centered cubic crystal structure called a diamond lattice. Diamond is less stable than graphite, but the conversion rate from diamond to graphite is negligible at ambient conditions...
s weighing a total of 16 carats (3.2 g), while the arms of the star are made out of synthetic rubies. In the center of the star is a silver medallion, with the Moscow Kremlin
Moscow Kremlin
The Moscow Kremlin , sometimes referred to as simply The Kremlin, is a historic fortified complex at the heart of Moscow, overlooking the Moskva River , Saint Basil's Cathedral and Red Square and the Alexander Garden...
wall, the Spasskaya Tower, and Lenin's Mausoleum
Lenin's Mausoleum
Lenin's Mausoleum also known as Lenin's Tomb, situated in Red Square in the center of Moscow, is the mausoleum that serves as the current resting place of Vladimir Lenin. His embalmed body has been on public display there since shortly after his death in 1924...
depicted in gold surrounded by bands of laurel and oak also colored in gold. The laurel and oak are bound with a red banner. The sky in the background is inlaid with blue enamel. Against the sky, the letters "СССР" (USSR) appear in gold centered on the top of the medallion, while the word "Победа" (Victory) is displayed on the red banner at the bottom.

Who the main designer of the order was remains uncertain; however, the current design was chosen by Joseph Stalin on October 20, 1943. Instead of being made at a mint, each Order was made in a jeweler's workshop.

The ribbons of various Soviet orders have been combined to create the Order Ribbon. The total length of the ribbon is 44 mm and it is mostly worn on the field uniform. The following featured orders are depicted on the ribbon (read from outside towards the center): 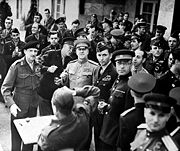