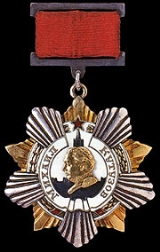 Established on July 29, 1942 (during the German-Soviet War) by a Decision of the Presidium of Supreme Soviet of the USSR, the order
Order (decoration)
An order or order of merit is a visible honour, awarded by a government, dynastic house or international organization to an individual, usually in recognition of distinguished service to a nation or to humanity. The distinction between orders and decorations is somewhat vague, except that most...
was created to award senior officers of the Red Army
Red Army
The Workers' and Peasants' Red Army started out as the Soviet Union's revolutionary communist combat groups during the Russian Civil War of 1918-1922. It grew into the national army of the Soviet Union. By the 1930s the Red Army was among the largest armies in history.The "Red Army" name refers to...
for skillful evasions of enemy attacks and successful counter attacks. The Order of Kutuzov was preserved in Russia upon the dissolution of the USSR, thus continuing to be one of the highest military awards in the Russian Federation.

The Order of Kutuzov was established in three different classes: 1st class, 2nd class, and 3rd class. General Ivan Galanin who distinguished himself during the Battle of Stalingrad
Battle of Stalingrad
The Battle of Stalingrad was a major battle of World War II in which Nazi Germany and its allies fought the Soviet Union for control of the city of Stalingrad in southwestern Russia. The battle took place between 23 August 1942 and 2 February 1943...
became the first recipient of the 1st class Order of Kutuzov. During the German-Soviet War 669 Orders of Kutuzov 1st class were awarded. Along with the commanders of Fronts
Front (Soviet Army)
A front was a major military organization in the Soviet Army during many wars. It was roughly equivalent to an army group in the militaries of most other countries except Germany...
and Armies
Army (Soviet Army)
An army, besides the generalized meanings of ‘a country's armed forces’ or its ‘land forces’, is a type of formation in militaries of various countries, including the Soviet Union. This article serves a central point of reference for Soviet armies without individual articles, and explains some of...
, the Order of Kutuzov 1st class was also awarded to Chelyabinsk Tractor Plant
Chelyabinsk Tractor Plant
Chelyabinsk Tractor Plant also known as CTZ-Uraltrak is a tractor plant in the Russian city of Chelyabinsk.-History:The plant was founded in 1933; the first product was a 60 hp tracked tractor С-60 fueled by petroleum ether . In 1937 the factory produced its first diesel-powered vehicle C-65...
in 1945, to recognize the enormous contribution of its workers towards the defeat of the Nazi Germany
Nazi Germany
Nazi Germany , also known as the Third Reich , but officially called German Reich from 1933 to 1943 and Greater German Reich from 26 June 1943 onward, is the name commonly used to refer to the state of Germany from 1933 to 1945, when it was a totalitarian dictatorship ruled by...
.

The 2nd class medal was awarded to 3,325 corps, division, and brigade commanders.

The 3rd class medal was awarded to regiment commanders, their chiefs of staff, battalion and company commanders and was established later, on February 8, 1943. 3,328 orders of the 3rd class were awarded.