Encyclopedia
The Optina Hermitage is an Eastern Orthodox monastery
Monastery
Monastery denotes the building, or complex of buildings, that houses a room reserved for prayer as well as the domestic quarters and workplace of monastics, whether monks or nuns, and whether living in community or alone .Monasteries may vary greatly in size – a small dwelling accommodating only...
for men near Kozelsk
Kozelsk
Kozelsk is a town in Kaluga Oblast, Russia, located on the Zhizdra River , southwest of Kaluga. Population: -History:The town of Kozelsk was first mentioned in a chronicle under the year of 1146 as a part of Principality of Chernigov...
in Russia
Russia
Russia or , officially known as both Russia and the Russian Federation , is a country in northern Eurasia. It is a federal semi-presidential republic, comprising 83 federal subjects...
. In the 19th century, the Optina was the most important spiritual centre of the Russian Orthodox Church
Russian Orthodox Church
The Russian Orthodox Church or, alternatively, the Moscow Patriarchate The ROC is often said to be the largest of the Eastern Orthodox churches in the world; including all the autocephalous churches under its umbrella, its adherents number over 150 million worldwide—about half of the 300 million...
and served as the model for several other monasteries, including the nearby Shamordino Convent. It was particularly renowned as the centre of Russian staretsdom.

It is not clear when the monastery was established. Its name is popularly derived from the Russian word for "living together". This may be explained by the fact that nun
Nun
A nun is a woman who has taken vows committing her to live a spiritual life. She may be an ascetic who voluntarily chooses to leave mainstream society and live her life in prayer and contemplation in a monastery or convent...
s were allowed into this cloister prior to 1504.

Most of the monastery buildings were erected at the turn of the 18th and 19th centuries, when the monastery was being renovated as a centre of Russian starets
Starets
A starets is an elder of a Russian Orthodox monastery who functions as venerated adviser and teacher. Elders or spiritual fathers are charismatic spiritual leaders whose wisdom stems from God as obtained from ascetic experience...
dom. In 1821, a hermitage for startsy was established 400 metres (1,312.3 ft) away from the monastery. The startsy attracted crowds of devout Christians to Kozelsk. Among others, Optina Pustyn was visited by Fyodor Dostoevsky
Fyodor Dostoevsky
Fyodor Mikhaylovich Dostoyevsky was a Russian writer of novels, short stories and essays. He is best known for his novels Crime and Punishment, The Idiot and The Brothers Karamazov....
, Vasily Zhukovsky
Vasily Zhukovsky
Vasily Andreyevich Zhukovsky was the foremost Russian poet of the 1810s and a leading figure in Russian literature in the first half of the 19th century...
, Nikolai Gogol
Nikolai Gogol
Nikolai Vasilievich Gogol was a Ukrainian-born Russian dramatist and novelist.Considered by his contemporaries one of the preeminent figures of the natural school of Russian literary realism, later critics have found in Gogol's work a fundamentally romantic sensibility, with strains of Surrealism...
, Ivan Turgenev
Ivan Turgenev
Ivan Sergeyevich Turgenev was a Russian novelist, short story writer, and playwright. His first major publication, a short story collection entitled A Sportsman's Sketches, is a milestone of Russian Realism, and his novel Fathers and Sons is regarded as one of the major works of 19th-century...
, and Vasily Rozanov
Vasily Rozanov
Vasily Vasilievich Rozanov was one of the most controversial Russian writers and philosophers of the pre-revolutionary epoch. His views have been termed the "religion of procreation", as he tried to reconcile Christian teachings with ideas of healthy sex and family life and not, as his adversary...
. Leo Tolstoy
Leo Tolstoy
Lev Nikolayevich Tolstoy was a Russian writer who primarily wrote novels and short stories. Later in life, he also wrote plays and essays. His two most famous works, the novels War and Peace and Anna Karenina, are acknowledged as two of the greatest novels of all time and a pinnacle of realist...
also visited the monastery, although he didn't approve of the staretsdom. 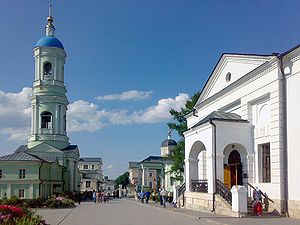 The cloister boasted a rich library, collected with a help from the Slavophile
Slavophile
Slavophilia was an intellectual movement originating from 19th century that wanted the Russian Empire to be developed upon values and institutions derived from its early history. Slavophiles were especially opposed to the influences of Western Europe in Russia. There were also similar movements in...
Kireyevsky brothers
Kireyevsky brothers
Kireyevsky brothers may refer to:*Ivan Kireyevsky *Pyotr Kireevsky...
, both buried within the monastery walls. The philosopher Konstantin Leontyev lived at the monastery for four years and took the tonsure here. The local starets Saint Amvrosy
Saint Ambrose of Optina
Venerable Ambrose of Optina was a starets and a hieroschemamonk in Optina Monastery, canonized in 1988 by the Local Council of the Russian Orthodox Church.-Biography:...
is said to have been a prototype of Father Zosima in Dostoyevsky's novel The Brothers Karamazov
The Brothers Karamazov
The Brothers Karamazov is the final novel by the Russian author Fyodor Dostoyevsky. Dostoyevsky spent nearly two years writing The Brothers Karamazov, which was published as a serial in The Russian Messenger and completed in November 1880...
.

After the Russian Revolution
October Revolution
The October Revolution , also known as the Great October Socialist Revolution , Red October, the October Uprising or the Bolshevik Revolution, was a political revolution and a part of the Russian Revolution of 1917...
, the last of the startsy were forcibly deported from the monastery, which was declared a gulag
Gulag
The Gulag was the government agency that administered the main Soviet forced labor camp systems. While the camps housed a wide range of convicts, from petty criminals to political prisoners, large numbers were convicted by simplified procedures, such as NKVD troikas and other instruments of...
. The last hegumen
Hegumen
Hegumen, hegumenos, igumen, or ihumen is the title for the head of a monastery of the Eastern Orthodox Church or Eastern Catholic Churches, similar to the one of abbot. The head of a convent of nuns is called hegumenia or ihumenia . The term means "the one who is in charge", "the leader" in...
was executed in Tula
Tula, Russia
Tula is an industrial city and the administrative center of Tula Oblast, Russia. It is located south of Moscow, on the Upa River. Population: -History:...
in 1938. Later, some of the structures were demolished, while the cathedral was designated a literary museum.

In 1987 with the beginning of the Perestroika
Perestroika
Perestroika was a political movement within the Communist Party of the Soviet Union during 1980s, widely associated with the Soviet leader Mikhail Gorbachev...
, Optina Pustyn was one of the first abbeys to be returned to the Russian Orthodox Church
Russian Orthodox Church
The Russian Orthodox Church or, alternatively, the Moscow Patriarchate The ROC is often said to be the largest of the Eastern Orthodox churches in the world; including all the autocephalous churches under its umbrella, its adherents number over 150 million worldwide—about half of the 300 million...
. In the 1990s its most notable startsy
Starets
A starets is an elder of a Russian Orthodox monastery who functions as venerated adviser and teacher. Elders or spiritual fathers are charismatic spiritual leaders whose wisdom stems from God as obtained from ascetic experience...
were glorified as saint
Saint
A saint is a holy person. In various religions, saints are people who are believed to have exceptional holiness.In Christian usage, "saint" refers to any believer who is "in Christ", and in whom Christ dwells, whether in heaven or in earth...
s. They are commemorated together on October 10 (October 23 on the Gregorian Calendar
Gregorian calendar
The Gregorian calendar, also known as the Western calendar, or Christian calendar, is the internationally accepted civil calendar. It was introduced by Pope Gregory XIII, after whom the calendar was named, by a decree signed on 24 February 1582, a papal bull known by its opening words Inter...
).

In 1993 three inhabitants of the monastery were murdered on Easter night. They were hieromonk
Hieromonk
Hieromonk , also called a Priestmonk, is a monk who is also a priest in the Orthodox Church and Eastern Catholicism....
Vasily (Roslyakov), monk Ferapont (Pushkarev) and monk Trophim (Tatarinov), known collectively as the Optina martyrs.