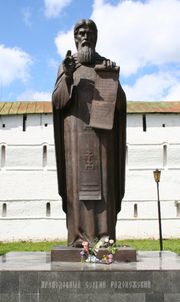 A starets is an elder of a Russian Orthodox
Russian Orthodox Church
The Russian Orthodox Church or, alternatively, the Moscow Patriarchate The ROC is often said to be the largest of the Eastern Orthodox churches in the world; including all the autocephalous churches under its umbrella, its adherents number over 150 million worldwide—about half of the 300 million...
monastery who functions as venerated adviser and teacher. Elders or spiritual fathers are charismatic spiritual leaders whose wisdom stems from God as obtained from ascetic experience. It is believed that through ascetic struggle
Asceticism
Asceticism describes a lifestyle characterized by abstinence from various sorts of worldly pleasures often with the aim of pursuing religious and spiritual goals...
, prayer and Hesychasm (seclusion or withdrawal), the Holy Spirit
Holy Spirit
Holy Spirit is a term introduced in English translations of the Hebrew Bible, but understood differently in the main Abrahamic religions.While the general concept of a "Spirit" that permeates the cosmos has been used in various religions Holy Spirit is a term introduced in English translations of...
bestows special gifts onto the elder including the ability to heal, prophesy, and most importantly, give effective spiritual guidance and direction. Elders are looked upon as being an inspiration to believers and an example of saintly virtue, steadfast faith, and spiritual peace.

Elders are not appointed by any authority; they are simply recognized by the faithful as being people "of the Spirit". An elder, when not in prayer or in voluntary seclusion, receives visitors (some who travel very far) and spends time conversing with them, offering a blessing (if the elder is an ordained cleric) and confession, and praying. People often petition the elder for intercessionary prayers, believing that the prayer of an elder is particularly effective.

Personal confession
Confession
This article is for the religious practice of confessing one's sins.Confession is the acknowledgment of sin or wrongs...
s to elders are encouraged, although not all of them are ordained to the priest
Priest
A priest is a person authorized to perform the sacred rites of a religion, especially as a mediatory agent between humans and deities. They also have the authority or power to administer religious rites; in particular, rites of sacrifice to, and propitiation of, a deity or deities...
hood. Many of them have a reputation amidst believers of being able to know the secrets of a person's heart without having ever previously met the visitor, and having the ability to discern God's plan for a person's life. This, as all of the elders gifts, is believed to come from the Holy Spirit
Holy Spirit
Holy Spirit is a term introduced in English translations of the Hebrew Bible, but understood differently in the main Abrahamic religions.While the general concept of a "Spirit" that permeates the cosmos has been used in various religions Holy Spirit is a term introduced in English translations of...
acting through the elder.

The institution may be traced to the beginnings of Christian monasticism in the 4th century. The original Greek term geron (meaning "elder", as in gerontology) was rendered by the Russian
Russian language
Russian is a Slavic language used primarily in Russia, Belarus, Uzbekistan, Kazakhstan, Tajikistan and Kyrgyzstan. It is an unofficial but widely spoken language in Ukraine, Moldova, Latvia, Turkmenistan and Estonia and, to a lesser extent, the other countries that were once constituent republics...
word starets, from Old Church Slavonic
Old Church Slavonic
Old Church Slavonic or Old Church Slavic was the first literary Slavic language, first developed by the 9th century Byzantine Greek missionaries Saints Cyril and Methodius who were credited with standardizing the language and using it for translating the Bible and other Ancient Greek...
starĭtsĭ, "elder", derived from starŭ, "old". The Greek tradition has a long unbroken history of elders and disciples, such as Sophronios and John Moschos in the seventh century, Symeon the Elder and Symeon the New Theologian
Symeon the New Theologian
Symeon the New Theologian was a Byzantine Christian monk and poet who was the last of three saints canonized by the Eastern Orthodox church and given the title of "Theologian"...
in the eleventh century, and contemporary charismatik gerontes such as Porphyrios and Paisios
Elder Paisios of Mount Athos
Elder Paisios of Mount Athos , born Arsenios Eznepidis , was a well-known Eastern Orthodox monk from Farasa, Cappadocia. He is famous for his spiritual teachings.-Biography:...
. Sergius of Radonezh
Sergius of Radonezh
Venerable Sergius of Radonezh , also transliterated as Sergey Radonezhsky or Serge of Radonezh, was a spiritual leader and monastic reformer of medieval Russia. Together with Venerable Seraphim of Sarov, he is one of the Russian Orthodox Church's most highly venerated saints.-Early life:The date of...
and Nil Sorsky
Nil Sorsky
Nil Sorsky was a leader of the Russian medieval movement opposing ecclesiastic landownership . Nil Sorsky is venerated as a saint in the Russian Orthodox Church. His feast day is on the anniversary of his repose on May 7.-Early life:Before becoming a monk, Nil Sorsky worked as a scribe and was...
were two most venerated startsy of Old Muscovy. The revival of elders in the Slavic world is associated with the name of Paisius Velichkovsky
Paisius Velichkovsky
Saint Paisius Velichkovsky or Wieliczkowski is the person who transmitted Eastern Orthodox staretsdom or the concept of spiritual guidance to the Slavic world.A Ukrainian by birth, Pyotr Velichkovsky was born in Poltava, where his father, Ivan, was a priest...
(1722-94), who produced the Russian translation of the Philokalia
Philokalia
The Philokalia is a collection of texts written between the 4th and 15th centuries by spiritual masters of the Eastern Orthodox hesychast tradition. They were originally written for the guidance and instruction of monks in "the practise of the contemplative life". The collection was compiled in...
. The most famous Russian starets of the early 19th century was Seraphim of Sarov
Seraphim of Sarov
Saint Seraphim of Sarov , born Prokhor Moshnin , is one of the most renowned Russian monks and mystics in the Orthodox Church. He is generally considered the greatest of the 19th century startsy and, arguably, the first...
(1759-1833), who went on to become one of the most revered Orthodox saints.

The Optina Pustyn near Kozelsk
Kozelsk
Kozelsk is a town in Kaluga Oblast, Russia, located on the Zhizdra River , southwest of Kaluga. Population: -History:The town of Kozelsk was first mentioned in a chronicle under the year of 1146 as a part of Principality of Chernigov...
used to be celebrated for its startsy (Schema-Archimandrite Moses, Schema-Hegumen Anthony, Hieroschemamonk Leonid, Hieroschemamonk Macarius, Hieroschemamonk Hilarion, Hieroschemamonk Ambrose, Hieroschemamonk Anatole (Zertsalov)). Such writers as Nikolay Gogol, Aleksey Khomyakov
Aleksey Khomyakov
Aleksey Stepanovich Khomyakov was a Russian religious poet who co-founded the Slavophile movement along with Ivan Kireyevsky, and became one of its most distinguished theoreticians....
, Leo Tolstoy
Leo Tolstoy
Lev Nikolayevich Tolstoy was a Russian writer who primarily wrote novels and short stories. Later in life, he also wrote plays and essays. His two most famous works, the novels War and Peace and Anna Karenina, are acknowledged as two of the greatest novels of all time and a pinnacle of realist...
and Konstantin Leontyev sought advice from the elders of this monastery. They also inspired the figure of Zosima in Dostoyevsky's novel The Brothers Karamazov
The Brothers Karamazov
The Brothers Karamazov is the final novel by the Russian author Fyodor Dostoyevsky. Dostoyevsky spent nearly two years writing The Brothers Karamazov, which was published as a serial in The Russian Messenger and completed in November 1880...
. Grigori Rasputin
Grigori Rasputin
Grigori Yefimovich Rasputin was a Russian Orthodox Christian and mystic who is perceived as having influenced the latter days of the Russian Emperor Nicholas II, his wife Alexandra, and their only son Alexei...
was styled starets by his followers, although he was not generally recognised as one. A more modern example of a starets is Archimandrite John Krestiankin (1910-2006) of the Pskov Monastery of the Caves who was popularly recognized as such by many Orthodox living in Russia.

The concept of the elder may be familiar to many Western readers through J. D. Salinger
J. D. Salinger
Jerome David Salinger was an American author, best known for his 1951 novel The Catcher in the Rye, as well as his reclusive nature. His last original published work was in 1965; he gave his last interview in 1980....
's Franny and Zooey
Franny and Zooey
Franny and Zooey is a book by American author J.D. Salinger which comprises his short story, "Franny", and novella, Zooey. The two works were published together as a book in 1961; the two stories originally appeared in The New Yorker in 1955 and 1957, respectively...
. In the novel, one of the characters refers to the 19th century anonymous
Anonymous work
Anonymous works are works, such as art or literature, that have an anonymous, undisclosed, or unknown creator or author. In the United States it is legally defined as "a work on the copies or phonorecords of which no natural person is identified as author."...
Russia
Russia
Russia or , officially known as both Russia and the Russian Federation , is a country in northern Eurasia. It is a federal semi-presidential republic, comprising 83 federal subjects...
n work, The Way of a Pilgrim
The Way of a Pilgrim
The Way of a Pilgrim is the English title of a 19th century Russian work, recounting the narrator's journey as a mendicant pilgrim across Russia while practicing the Jesus Prayer. It is unknown if the book is literally an account of a single pilgrim, or if it uses a fictional pilgrim's journey as a...
. The title character of The Way of a Pilgrim (ostensibly, the author) is advised in the progress of his spiritual life by an elder, who uses the Jesus Prayer
Jesus Prayer
The Jesus Prayer or "The Prayer" is a short, formulaic prayer esteemed and advocated within the Eastern Orthodox church:The prayer has been widely taught and discussed throughout the history of the Eastern Churches. It is often repeated continually as a part of personal ascetic practice, its use...
as a starting point for spiritual discipline.

In Bulgarian
Bulgarian language
Bulgarian is an Indo-European language, a member of the Slavic linguistic group.Bulgarian, along with the closely related Macedonian language, demonstrates several linguistic characteristics that set it apart from all other Slavic languages such as the elimination of case declension, the...
and several other southern Slavic languages the word translates literally to "old man". A word with a meaning closer to the translation in Russian would be stareishina .