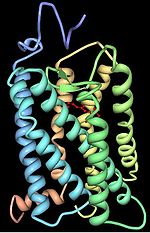 Opsins are a group of light-sensitive 35–55 kDa
Atomic mass unit
The unified atomic mass unit or dalton is a unit that is used for indicating mass on an atomic or molecular scale. It is defined as one twelfth of the rest mass of an unbound neutral atom of carbon-12 in its nuclear and electronic ground state, and has a value of...
membrane-bound G protein-coupled receptor
G protein-coupled receptor
G protein-coupled receptors , also known as seven-transmembrane domain receptors, 7TM receptors, heptahelical receptors, serpentine receptor, and G protein-linked receptors , comprise a large protein family of transmembrane receptors that sense molecules outside the cell and activate inside signal...
s of the retinylidene protein
Retinylidene protein
Retinylidene proteins are a family of proteins that use retinal as chromophore for light reception. Proteins of this family are also called opsins...
family found in photoreceptor cells of the retina
Retina
The vertebrate retina is a light-sensitive tissue lining the inner surface of the eye. The optics of the eye create an image of the visual world on the retina, which serves much the same function as the film in a camera. Light striking the retina initiates a cascade of chemical and electrical...
. Five classical groups of opsins are involved in vision, mediating the conversion of a photon
Photon
In physics, a photon is an elementary particle, the quantum of the electromagnetic interaction and the basic unit of light and all other forms of electromagnetic radiation. It is also the force carrier for the electromagnetic force...
of light into an electrochemical signal, the first step in the visual transduction cascade. Another opsin found in the mammalian retina, melanopsin
Melanopsin
Melanopsin is a photopigment found in specialized photosensitive ganglion cells of the retina that are involved in the regulation of circadian rhythms, pupillary light reflex, and other non-visual responses to light. In structure, melanopsin is an opsin, a retinylidene protein variety of...
, is involved in circadian rhythm
Circadian rhythm
A circadian rhythm, popularly referred to as body clock, is an endogenously driven , roughly 24-hour cycle in biochemical, physiological, or behavioural processes. Circadian rhythms have been widely observed in plants, animals, fungi and cyanobacteria...
s and pupillary reflex but not in image-forming.

There are two groups of protein termed opsins; these groups are not homologous, but have convergently evolved a similar form and function. Type I opsins are employed by prokaryotes, whereas animals use type II opsins. No opsins have been found outside these groups (for instance in plants, fungi, or placozoans), although as-yet unconfirmed reports of opsins in sponges would suggest that opsins were present in the ancestral metazoan.

Based on the phylogeny of their sequences, type 2 opsins can be grouped into six families; these families are very distinct, with under 20% of their sequences shared with any other subfamily. The families consist of the vertebrate opsins/encephalopsins; Go opsins; Gs opsins; invertebrate Gq opsins; the photoisomerases and neuropsins. These subfamilies can be grouped according to their expression; the first three are found in ciliary-type photoreceptor cells; Gq opsins in rhabdomeric-type photoreceptor cells; and the latter two are found elsewhere but based on their shared intron positions can be bundled together into the photoisomerases.

Like eukaryotic opsins, prokaryotic opsins have a seven transmembrane domain structure similar to that found in eukaryotic G-protein coupled receptors. Despite this similarity, there is no evidence that they are evolutionarily related, suggesting that they evolved independently of one another.

Several type 1 opsins, such as proteo-
Proteorhodopsin
Proteorhodopsin is a photoactive retinylidene protein in marine bacterioplanktons and eukaryotes. Just like the homologous pigment bacteriorhodopsin found in some archaea, it consists of a transmembrane protein bound to a retinal molecule and functions as a light-driven proton pump. Some members...
, halo- and bacteriorhodopsin
Bacteriorhodopsin
Bacteriorhodopsin is a protein used by Archaea, the most notable one being Halobacteria. It acts as a proton pump; that is, it captures light energy and uses it to move protons across the membrane out of the cell...
, are used by various bacterial groups to harvest energy from light to carry out metabolic processes using a non-chlorophyll
Chlorophyll
Chlorophyll is a green pigment found in almost all plants, algae, and cyanobacteria. Its name is derived from the Greek words χλωρος, chloros and φύλλον, phyllon . Chlorophyll is an extremely important biomolecule, critical in photosynthesis, which allows plants to obtain energy from light...
-based pathway. Additionally, sensory rhodopsins exist in Halobacteria
Halobacteria
In taxonomy, the Halobacteria are a class of the Euryarchaeota, found in water saturated or nearly saturated with salt. They are also called halophiles, though this name is also used for other organisms which live in somewhat less concentrated salt water...
that induce a phototactic
Phototaxis
Phototaxis is a kind of taxis, or locomotory movement, that occurs when a whole organism moves in response to the stimulus of light. This is advantageous for phototrophic organisms as they can orient themselves most efficiently to receive light for photosynthesis...
response by interacting with transducer
Signal transduction
Signal transduction occurs when an extracellular signaling molecule activates a cell surface receptor. In turn, this receptor alters intracellular molecules creating a response...
membrane-embedded proteins that have no relation to G proteins.

Ciliary opsins are expressed in ciliary photoreceptor cells, and include the vertebrate opsins/encephalopsins, Go and Gs opsin subfamilies. They convert light signals to nerve impulses via cyclic nucleotide gated ion channels, which work by increasing the charge differential across the cell membrane (i.e. hyperpolarization
Hyperpolarization (biology)
Hyperpolarization is a change in a cell's membrane potential that makes it more negative. It is the opposite of a depolarization.Hyperpolarization is often caused by efflux of K+ through K+ channels, or influx of Cl– through Cl– channels. On the other hand, influx of cations, e.g...
.)

Vertebrate opsins can be further subdivided into rod opsins and four types of cone opsin, based on differential spatial expression, spectral sensitivity, and evolution
Evolution
Evolution is any change across successive generations in the heritable characteristics of biological populations. Evolutionary processes give rise to diversity at every level of biological organisation, including species, individual organisms and molecules such as DNA and proteins.Life on Earth...
ary history. Rod opsins (rhodopsins, usually denoted Rh), are used in night vision, are thermally stable, and are found in the rod photoreceptor cells
Rod cell
Rod cells, or rods, are photoreceptor cells in the retina of the eye that can function in less intense light than can the other type of visual photoreceptor, cone cells. Named for their cylindrical shape, rods are concentrated at the outer edges of the retina and are used in peripheral vision. On...
. Cone opsins, employed in color vision, are less-stable opsins located in the cone photoreceptor cells
Cone cell
Cone cells, or cones, are photoreceptor cells in the retina of the eye that are responsible for color vision; they function best in relatively bright light, as opposed to rod cells that work better in dim light. If the retina is exposed to an intense visual stimulus, a negative afterimage will be...
. Cone opsins are further subdivided according to their absorption maxima (λmax), the wavelength at which the highest light absorption is observed. Evolutionary relationships, deduced using the amino acid
Amino acid
Amino acids are molecules containing an amine group, a carboxylic acid group and a side-chain that varies between different amino acids. The key elements of an amino acid are carbon, hydrogen, oxygen, and nitrogen...
sequence of the opsins, are also frequently used to categorize cone opsins into their respective group. Both methods predict four general cone opsin groups in addition to rhodopsin.

Humans have the following set of photoreceptor proteins responsible for vision:

This type of opsin is expressed throughout the mammalian body.
It is also expressed in ciliary photoreceptor cells in annelids, and in the brains of some insects.

These opsins, absent from higher vertebrates and arthropods, are found in the ciliary photoreceptor cells of molluscs and basal chordates (amphioxus); and in cnidarians, respectively.

Arthropods and molluscs use Gq opsins. Arthropods appear to attain colour vision in a similar fashion to the vertebrates, by the use of three (or more) distinct groups of opsin, distinct both in terms of phylogeny and spectral sensitivity. The Gq opsin melanopsin is also expressed in vertebrates, where it is responsible for the maintenance of circadian rhythm
Circadian rhythm
A circadian rhythm, popularly referred to as body clock, is an endogenously driven , roughly 24-hour cycle in biochemical, physiological, or behavioural processes. Circadian rhythms have been widely observed in plants, animals, fungi and cyanobacteria...
s.

Unlike ciliary opsins, these are associated with canonical transient receptor potential ion channels; these lead to the electric potential difference across a cell membrane being eradicated (i.e. depolarization).

The identification of the crystal structure of squid rhodopsin is likely to further our understanding of its function in this group.

Arthropods do use different opsins in their different eye types, but at least in Limulus the opsins expressed in lateral and in compound eyes are 99% identical and presumably diverged recently.

This class of opsins are not coupled to a G-protein, and thus serve to traffic retinal around in response to light, rather than directly in signal-induction.

These opsins are found in nervous tissue in mammals, and despite some genetic similarities to photoisomerases, their function has not yet been identified.

Opsin proteins covalently bind to a vitamin A
Vitamin A
Vitamin A is a vitamin that is needed by the retina of the eye in the form of a specific metabolite, the light-absorbing molecule retinal, that is necessary for both low-light and color vision...
-based retinaldehyde chromophore
Chromophore
A chromophore is the part of a molecule responsible for its color. The color arises when a molecule absorbs certain wavelengths of visible light and transmits or reflects others. The chromophore is a region in the molecule where the energy difference between two different molecular orbitals falls...
through a Schiff base linkage to a lysine
Lysine
Lysine is an α-amino acid with the chemical formula HO2CCH4NH2. It is an essential amino acid, which means that the human body cannot synthesize it. Its codons are AAA and AAG....
residue in the seventh transmembrane alpha helix
Alpha helix
A common motif in the secondary structure of proteins, the alpha helix is a right-handed coiled or spiral conformation, in which every backbone N-H group donates a hydrogen bond to the backbone C=O group of the amino acid four residues earlier...
. In vertebrates, the chromophore is either 11-cis
Cis
Cis may have the following meanings:* "Cis-" as a prefix of Latin origin, meaning "on the same side [as]" or "on this side [of]", with several derived usages:** In chemistry, cis- refers to cis-trans isomerism...
-retinal (A1) or 11-cis-3,4-didehydroretinal (A2) and is found in the retinal binding pocket of the opsin. The absorption of a photon of light results in the photoisomerisation of the chromophore from the 11-cis to an all-trans conformation. The photoisomerization induces a conformational change in the opsin protein, causing the activation of the phototransduction cascade. The opsin remains insensitive to light in the trans form. It is regenerated by the replacement of the all-trans retinal by a newly synthesized 11-cis-retinal provided from the retinal epithelial cells. Opsins are functional while bound to either chromophore, with A2-bound opsin λmax being at a longer wavelength than A1-bound opsin.