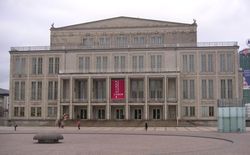 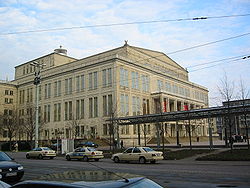 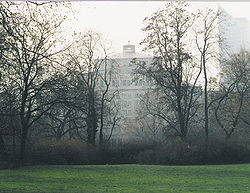 Oper Leipzig is an opera house
Opera house
An opera house is a theatre building used for opera performances that consists of a stage, an orchestra pit, audience seating, and backstage facilities for costumes and set building...
and opera
Opera
Opera is an art form in which singers and musicians perform a dramatic work combining text and musical score, usually in a theatrical setting. Opera incorporates many of the elements of spoken theatre, such as acting, scenery, and costumes and sometimes includes dance...
company in Leipzig
Leipzig
Leipzig Leipzig has always been a trade city, situated during the time of the Holy Roman Empire at the intersection of the Via Regia and Via Imperii, two important trade routes. At one time, Leipzig was one of the major European centres of learning and culture in fields such as music and publishing...
, Germany
Germany
Germany , officially the Federal Republic of Germany , is a federal parliamentary republic in Europe. The country consists of 16 states while the capital and largest city is Berlin. Germany covers an area of 357,021 km2 and has a largely temperate seasonal climate...
.

The Leipzig Opera traces its establishment to the year 1693, making it the third oldest opera venue in Europe after La Fenice
La Fenice
Teatro La Fenice is an opera house in Venice, Italy. It is one of the most famous theatres in Europe, the site of many famous operatic premieres. Its name reflects its role in permitting an opera company to "rise from the ashes" despite losing the use of two theatres...
(Venice, Italy) and the Hamburg State Opera
Hamburg State Opera
The Hamburg State Opera is one of the leading opera companies in Germany.Opera in Hamburg dates back to 2 January 1678 when the "Opern-Theatrum" was inaugurated with a performance of a biblical Singspiel by Johann Theile...
(Hamburg, Germany). The Leipzig Opera does not have its own opera orchestra, and the Leipzig Gewandhaus Orchestra
Leipzig Gewandhaus Orchestra
The Leipzig Gewandhaus Orchestra is one of the the oldest symphony orchestras in the world...
performs as the orchestra for the opera. This relationship dates back to 1766, with performances of the Singspiel
Singspiel
A Singspiel is a form of German-language music drama, now regarded as a genre of opera...
Die verwandelten Weiber, oder Der Teufel ist los
Die verwandelten Weiber
Die verwandelten Weiber, oder Der Teufel ist los, erster Theil is a three-act 'comische Oper' by the German composer Johann Adam Hiller, incorporating 14 musical numbers from the popular farce Der Teufel ist los by Johann Georg Standfuss.The libretto was by Christian Felix Weiße based on the...
by Johann Adam Hiller.

The previous theater (the "Neues Theater") was inaugurated on January 28, 1868, with Jubilee Overture by Carl Maria von Weber
Carl Maria von Weber
Carl Maria Friedrich Ernst von Weber was a German composer, conductor, pianist, guitarist and critic, one of the first significant composers of the Romantic school....
and the overture for Iphigénie en Aulide
Iphigénie en Aulide
Iphigénie en Aulide is an opera in three acts by Christoph Willibald Gluck, the first work he wrote for the Paris stage. The libretto was written by Leblanc du Roullet and was based on Jean Racine's tragedy Iphigénie...
by Gluck
Christoph Willibald Gluck
Christoph Willibald Ritter von Gluck was an opera composer of the early classical period. After many years at the Habsburg court at Vienna, Gluck brought about the practical reform of opera's dramaturgical practices that many intellectuals had been campaigning for over the years...
and Goethe
Johann Wolfgang von Goethe
Johann Wolfgang von Goethe was a German writer, pictorial artist, biologist, theoretical physicist, and polymath. He is considered the supreme genius of modern German literature. His works span the fields of poetry, drama, prose, philosophy, and science. His Faust has been called the greatest long...
's play Iphigenia in Tauris.

From 1886 to 1888, Gustav Mahler
Gustav Mahler
Gustav Mahler was a late-Romantic Austrian composer and one of the leading conductors of his generation. He was born in the village of Kalischt, Bohemia, in what was then Austria-Hungary, now Kaliště in the Czech Republic...
was the second conductor; Arthur Nikisch
Arthur Nikisch
Arthur Nikisch ; 12 October 185523 January 1922) was a Hungarian conductor who performed internationally, holding posts in Boston, London and - most importantly - Berlin. He was considered an outstanding interpreter of the music of Bruckner, Tchaikovsky, Beethoven and Liszt...
was his superior.

During an air raid
Strategic bombing
Strategic bombing is a military strategy used in a total war with the goal of defeating an enemy nation-state by destroying its economic ability and public will to wage war rather than destroying its land or naval forces...
in the night of December 3, 1943, the theater was destroyed, as were all Leipzig's theatres.

In May 2008, the appointments of Alexander von Maravic as Artistic Director (Intendant) and Peter Konwitschny
Peter Konwitschny
Peter Konwitschny is a German opera and theatre director.-Biography:Peter Konwitschny grew up in Leipzig, where his father Franz Konwitschny was principal conductor of the Leipzig Gewandhaus Orchestra...
as principal director of productions at Leipzig Opera were announced. The current Generalmusikdirektor (General Music Director, or GMD) of Oper Leipzig is Ulf Schirmer
Ulf Schirmer
Ulf Schirmer is a German conductor. He studied at the Bremen Conservatory, and also at the Hochschule für Musik und Theater Hamburg with György Ligeti, Christoph von Dohnányi and Horst Stein....
, effective with the 2009-2010 season.